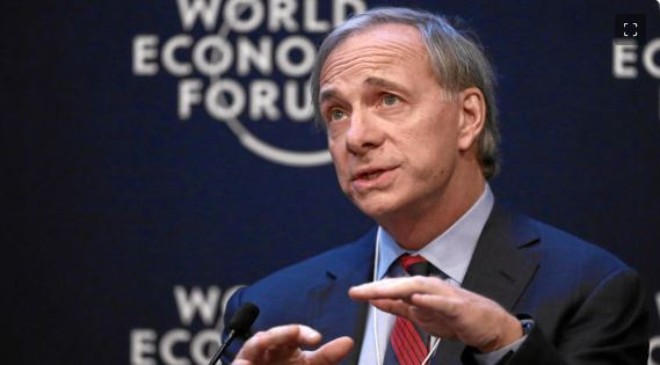 Billionaire investor Ray Dalio has warned of a “perfect storm” that will spread economic pain as the U.S. Federal Reserve hikes interest rates and said government stimulus programs during the COVID-19 pandemic had created a bubble.

What Happened: “The Fed and the government together gave enormous amounts of debt and credit and created a … giant lurch forward and created a bubble. Now they’re putting on the brakes. So now we’re going to create a giant lurch backward,” Dalio, who founded the world’s largest hedge fund Bridgewater Associates and recently relinquished control of it, said at the Greenwich Economic Forum, according to a Reuters report.

Dalio also said domestic tension in the U.S. population caused by “irreconcilable differences” and a yawning wealth gap, coupled with international conflicts, are contributing to the “perfect storm.”

Interest Rates: He pointed out that the Federal Reserve will continue to hike rates to fight inflation. “And there’ll be real pain, of course,” he said. “I don’t know whether that’s 4.5% or the economy could not take an interest rate much higher than that before it’s going to be negative.”

Market experts have been warning of difficult times ahead. JPMorgan Chase & Co (NYSE: JPM) CEO Jamie Dimon on Monday said the U.S. and global economies were likely to slip into a recession next year.

Price Action: Following aggressive Fed rate hikes this year, assets from equities to bonds have taken a hit. The SPDR S&P 500 ETF Trust (NYSE: SPY) has lost over 25% so far this year, while the Vanguard Total Bond Market Index Fund ETF (NASDAQ: BND) has shed over 16%.