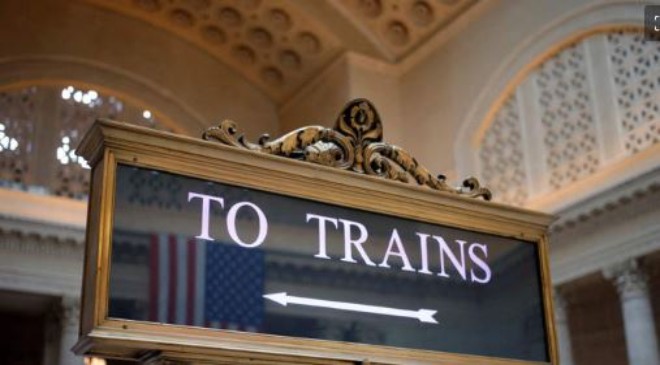 Wolverine Train 351 left Pontiac about 6 a.m. Eastern time on Friday. Some passengers were so frustrated that they got off the train well before it finally reached Chicago on Saturday, just after midnight Central time, MLive.com reported.

The problems began west of Ann Arbor. The train stopped there due to the power problem, Amtrak spokesman Jason Abrams said.

Electricity on Wolverine 351 went out once the engine lost power, according to passenger Katie Kobiljak, 23. That also meant the toilets didn’t flush.

“You could use the bathroom, but it was like using a port-a-potty, and that’s not great,” she said.

Wolverine 351 was then connected to another passenger train that was to pull it to Chicago. Kobiljak said there was a lot of stopping and starting as officials tried to connect the trains.

The train stopped again near Jackson, Mich., for a medical emergency and was there for two hours without power, Kobiljak said.

Abrams said the passenger who called for medical treatment remained on the train as it continued to Chicago.

But Kobiljak had had enough and exited at Jackson. “So, I was on the train for nine hours and only made it like halfway through the state,” she said.

A brake issue caused another stoppage, this time in northwestern Indiana, not far from Chicago.

Then there was another delay due to battery problems, Abrams said.

That’s when Michael Bambery, 48, decided to leave. He had boarded at 7:15 a.m. Friday in Ann Arbor. He arrived at his hotel about 16 hours later after paying $200 for a rideshare to finish the trip.

“No heat, no electricity, and at this point it’s dark, so no lights,” he said. “They were cracking glowsticks to give us light. The toilets are overflowing because you cannot flush these toilets without electricity, so it smells awful. It’s really cold, and there’s just a skeleton crew on board.”

Some passengers were able to open doors to the train and a couple dozen got off, Bambery said.

“We’re feeling like we can’t stay on this train anymore,” he said. “We’re getting no information from Amtrak. Again, we’re cold, hungry, people need to use the bathroom. It smells awful. And a percentage of people are having acute anxiety symptoms and screaming.”

Abrams told MLive.com that “due to the lateness of the combo train, some passengers elected to safely detrain in East Chicago [in Indiana] and find alternate transportation.”

“Despite our best efforts, there are times when circumstances arise that are out of our control,” Amtrak said in its apology to passengers.