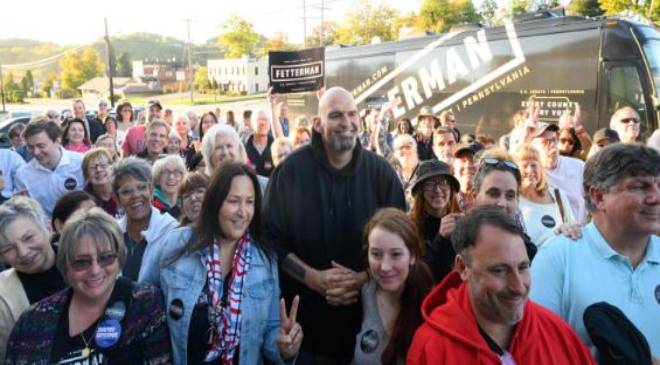 MURRYSVILLE, Pa. — “I don’t have to tell you that it is hard to be a Democrat in Westmoreland County.”

So began the chairwoman of the Westmoreland Democratic Party, Michelle McFall, as she introduced Lt. Gov. John Fetterman of Pennsylvania to supporters this week in the deep-red exurbs of Pittsburgh.

About 100 people were gathered in a parking lot behind the Fetterman campaign bus, emblazoned with the slogan “Every County, Every Vote.” That is the strategy on which Mr. Fetterman has built his Senate candidacy — announced last year with a video reminiscent of a Springsteen song, showing small towns where people “feel left behind” and promising that “Fetterman can get a lot of those voters.”

Now, in the final weeks before Election Day, with polls showing a narrowing race in a pivotal contest for control of the Senate, the premise that Mr. Fetterman can win over rural voters, including some who supported former President Donald J. Trump, is under strain.

Mr. Fetterman has limited his campaign schedule as he recovers from a stroke, unable to visit “every county.” He is facing fierce Republican attacks that appear to be hitting home with voters, particularly over his record on crime. The share of voters who view Mr. Fetterman unfavorably has risen, while many Republicans have grudgingly rallied behind their nominee, Mehmet Oz. Because Mr. Fetterman had a double-digit lead in polling over the summer, the race’s tightening, while typical in a battleground state, has caused Democrats’ anxiety to rise.

In a speech lasting just five minutes, Mr. Fetterman told supporters in Westmoreland County, which Mr. Trump won by 28 percentage points in 2020, that “we must jam up red counties” by running up votes. Still recovering from his stroke in May, Mr. Fetterman spoke fluently but haltingly, with gaps between words. It typified how his campaign has been forced to pivot from relying on Mr. Fetterman’s charisma before crowds, in stump appearances during the spring, to a strategy focused heavily on social media and television ads. A single debate with Dr. Oz is scheduled for Oct. 25.

In Pennsylvania’s vast rural areas, the Fetterman campaign aims to improve upon the 2020 performance of President Biden, another candidate who banked on his Everyman appeal, and who narrowly carried the state.

Exceeding Mr. Biden in red counties may be necessary if Mr. Fetterman does not match the blowout Biden victories in the Philadelphia suburbs, where the foil of Mr. Trump in 2020 repelled college-educated voters.

Much of Mr. Fetterman’s appeal to rural and working-class places goes beyond his policy ideas to expand broadband or “make more stuff in America.” His power is his brand — encapsulated in the casual attire, the shaved head and tattoos, conveying that he is not a conventional politician.

“What I see is people like the Democratic union guy or gal who voted for Donald Trump who is coming back because they like Fetterman, what he stands for, he looks like them — the tattoos and a little bit of pot smoking,” Mr. Maggi said. “He excites them.” (Though Mr. Fetterman favors legalizing recreational marijuana, he has said that he does not use it himself.)

Polling broadly supports the idea that Mr. Fetterman has a common-touch image with voters. In a Monmouth University survey this week, 57 percent of Pennsylvania voters said that Mr. Fetterman understood the day-to-day concerns of people like them. Only 39 percent said the same of Dr. Oz, a former heart surgeon and celebrity TV host.

But Ms. McFall, the Democratic chairwoman in Westmoreland County, said a new attack ad against Mr. Fetterman on local radio sought to puncture his common-man image.

“What I’ve been hearing on the radio now is that John Fetterman lived off his parents and is a spoiled rich kid who pretends to be a man of the people,” Ms. McFall said, adding that the aim of the attacks is to elicit working-class resentment: “‘I don’t have what this person has, and it’s not fair.’”

Mr. Fetterman grew up affluent near York, Pa. For 13 years, he was the mayor of Braddock, a town outside Pittsburgh devastated by industrial collapse. The job paid $150 a year, and his family supported him until he became lieutenant governor at age 49.

Mr. Fetterman said in an interview that his family had backed his life choice to work “in a community that was abandoned.” He has not hidden his family’s help, although it is not widely known.

It is unclear if attacks on his privileged background, which Dr. Oz has said makes him “a pretend populist,” are turning off working-class voters.

In interviews this week with a dozen self-identified independent voters in Westmoreland and other red counties, none brought up Mr. Fetterman’s background, or Dr. Oz’s dubious medical advice on his TV show, or other fleeting issues that both campaigns have tried to seize on.

The issue most commonly raised by voters, including some Oz supporters, was that Dr. Oz was not a “real” Pennsylvanian because he moved to the state only in 2020. The most common objection to Mr. Fetterman was that he had pushed for clemency for some long-incarcerated men serving life sentences for murder, who prison authorities said posed no threat to public safety.

“What upsets me about Oz is I don’t feel he’s really a Pennsylvanian,” said Michael Lyter, who lives in Mifflin County, in the central part of the state. Nonetheless, he plans to vote for Dr. Oz.

A retired drug and alcohol counselor, Mr. Lyter, 66, said: “I definitely don’t want Fetterman in there. He’s too much pro-crime.”

He was unpersuaded by Mr. Fetterman’s dress code. “Do you know what he looks like to me?” Mr. Lyter said. “He looks like a heroin addict. They’re the only ones who wear hoodies in the summertime.”

It was rare to find anyone in the interviews who had voted for Republicans recently and now favored Mr. Fetterman. And it was equally rare to find recent Democratic voters swinging to Dr. Oz.

The interviews were anecdotal, though polling indicates that Mr. Fetterman has an edge among one large cohort of voters in red counties — white working-class women. A Fox News survey last month showed him winning white women without a college degree by eight percentage points. There was also a yawning gender gap: White men without a college degree preferred Dr. Oz by 15 points.

One of the rare party switchers was Paul Amalong, a security guard who was leaving a farmer’s market in Latrobe with a bag of zucchinis.

“Tell you the truth, I was a Republican all my life until Jan. 6, and I switched to the Democratic Party after that,” Mr. Amalong said.

A former truck driver, Mr. Amalong, 74, said Mr. Fetterman had his vote, though mainly because he believes Republicans have become the party of insurrection. “When I was a Republican, I didn’t vote straight Republican,” he said. “But since Jan. 6 came, I don’t look. I just punch in straight Democrat.”

Latrobe, in central Westmoreland County, is a brewing and manufacturing city where the first banana split was created in 1904. Its population has fallen steadily since 1970. It might have served as one of the communities in the Fetterman announcement video whose “best days were a generation ago.”

“Downtown Latrobe, it was wall-to-wall people,” recalled Carol Dziak, 69, who was also shopping at the farmer’s market. Ms. Dziak’s husband worked for 45 years at the brewery that formerly made Rolling Rock beer. For a while, the couple owned a Hallmark card shop, but customers abandoned it for mall stores.

“I’m a Democrat, but I don’t vote Democrat,” Ms. Dziak said. She didn’t like what she had seen about Mr. Fetterman in TV ads calling him soft on crime. “The convicts, letting them get out of jail and stuff — that, I think, is my top thing,” she said.

In 2016, a house outside Latrobe painted like an American flag with a towering cutout of Mr. Trump drew hundreds of people to pose for selfies. Now the owner of what became known as the “Trump House,” Leslie Rossi, is Latrobe’s Republican state representative. She said Mr. Fetterman had no chance of picking up lapsed Democratic supporters in the county.

“Voters who are now voting red do not have any plans of switching back to the party they feel has let them down,” Ms. Rossi said.

Brendan McPhillips, Mr. Fetterman’s campaign manager, said he expected that Mr. Fetterman would win a higher percentage of votes in red counties than Mr. Biden did two years ago.

“There’s real enthusiasm for John out in these red counties in a way I’ve never seen before,” said Mr. McPhillips, who also ran Mr. Biden’s 2020 campaign in Pennsylvania. “People see John at Costco, at Aldi. He’s real and one of them. Even if they might not agree with him on everything.”

Jayanna Shirey, a 28-year-old college student who lives with her parents in Frenchville, Pa., and is studying criminal justice, defended Mr. Fetterman’s approach. The prison system locks up too many people “who won’t be reoffending,” she said. “Something got out of hand back in the ’80s. The American taxpayers had to fork out hard-earned cash to pay for men or women to sit their whole life in prison.”

A coal-miner’s daughter, Ms. Shirey said she was proud of her rural roots in central Pennsylvania and her political independence. “Hell yes, I think I’m a redneck, but hell no, I’m not a Democrat or a Republican,” she said.

She was not overly enthusiastic about either Senate candidate, but said she planned to vote for Mr. Fetterman.

She wants to become a state game warden.

“Unless Fetterman says, ‘I’m going to come into your house and take your .30-06 so you can’t hunt your whitetail deer,’” she said, “I’m going to vote for him.”