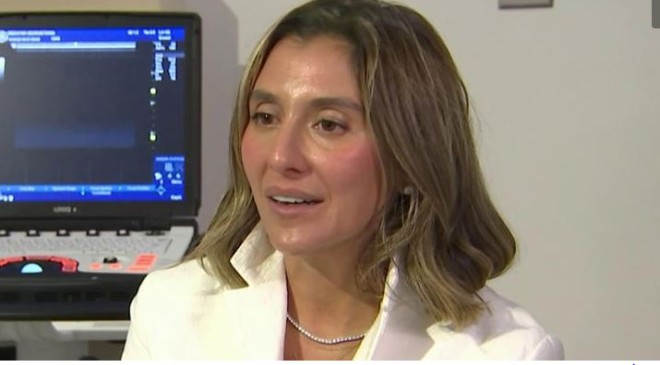 The youngest Latina to lead a breast surgery program in the U.S. at a major academic medical center practices in D.C.

Dr. Lucy Maria De La Cruz, 39, has been practicing medicine since 2016, dedicating her work to women’s health. She had envisioned being a chief of surgery for years.

The call that made her dreams come true came at an ironic time: De La Cruz was getting a mammogram about a year ago when the Betty Lou Ourisman Breast Health Center offered her the position of chief of the breast surgery program at MedStar Georgetown University Hospital.

“I’d always thought about, you know, being a chief, a program director, and I just didn’t think it was going to come at this early stage of my career,” De La Cruz said.

She grew up in Cuba, where her parents were physicians and completed AIDS research in Africa when she was a little girl, inspiring her passion for medicine at an early age. Her mom made her a little white coat, and she would walk around the lab telling everyone she was going to be a future doctor.

De La Cruz completed medical school in the Dominican Republic, and eventually she and her family came to the U.S. under political asylum. As a Hispanic immigrant, working in the medical field has been far from easy for her.

“When you say that you’re a Latina, an immigrant, a foreign medical graduate who’s applying to a very competitive field … it’s like a multi-layered hurdle that you’re overcoming,” she said.

Hispanic people are a minority in the field, making up about 6% of people working in medicine and surgery, De La Cruz said. When she felt doubt or fear, she reminded herself that everything would be worth it, even if it wasn’t going to be easy.

“Above all I have to thank God that I’m here, and I think there’s a purpose to me being in this position,” she said.