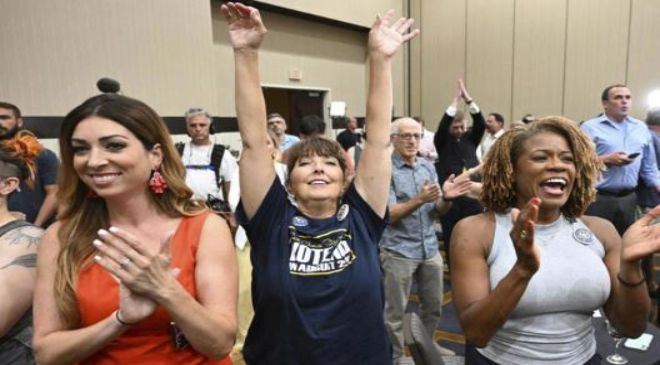 When Kansans voted overwhelmingly to protect abortion this summer, the 59-41 referendum margin in the deep-red state sent shockwaves through the country, inspiring pro-choice advocates and sending anti-abortion campaigners scrambling for an unexpected political dogfight as five similar ballot initiatives approach in November.

In Kentucky and Montana, red like Kansas, it was Republicans and anti-abortion advocates who brought the initiatives with the aim of removing abortion protections from state constitutions.

They say the Kansas loss was an outlier because the language on the ballot in that referendum was too confusing to be for the result to be reflective of Kansans’ will. Hoping to avoid the same fate, the Kentucky ballot will ask voters to agree with the statement: “Nothing in this constitution shall be construed to secure or protect a right to abortion or require the funding of abortion.”

Although Kentucky is reliably Republican, its supreme court – which will decide, a week after the referendum, whether the state’s current abortion ban is viable – does not yet clearly lean one way on abortion rights.

“The stakes are kind of like they were in Kansas,” said Rachel Rebouché, the dean of Temple University’s school of law. “You have a red state with a history of anti-abortion legislation – and if the electorate says no to this ballot, it will send a clear signal that there’s a disconnect between the voters and the state and the legislators, who would otherwise pass anti-abortion laws.”

She cautioned, however, that it was not clear Kentuckians will turn out to vote in the same way Kansans did. Kentucky’s electorate also skews more conservative on reproductive rights, with a 12-point margin between those who want abortion to be mostly legal and mostly illegal, according to the New York Times (though that analysis appeared to undercount the support for abortion in Kansas, predicting a neck-and-neck race that was far from the 18-point margin that materialized in August).

“There is the general sense that [Kentucky] is a harder fight. People suspect the ballot initiative will be successful, or if it fails, it won’t be by as wide a margin as in Kansas,” says Rebouché.

In Montana, Republicans are pushing a more confusingly worded measure, promising severe penalties on doctors who deliver “born-alive infants”, including criminalization and fines of up to $50,000.

Montana’s supreme court has ruled that the state constitution’s right to privacy protects the right to abortion, so a yes vote for this ballot would not explicitly ban the procedure.