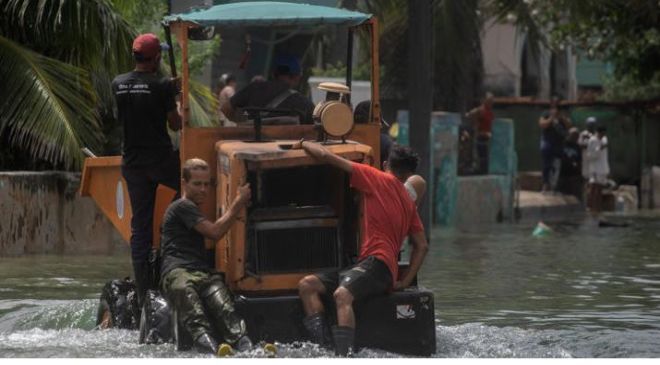 The Cuban government in a rare petition is asking the Biden administration for US aid to deal with the damage of Hurricane Ian, which pummeled the island nation earlier this week, according to The Wall Street Journal.

The outlet obtained communications between the two governments detailing Cuba’s request for emergency assistance in the aftermath of Ian’s rampage. The country reportedly did not request a specific dollar amount and The Journal said the US was still determining whether Havana would ultimately supplement the request.

The hurricane hit Cuba on Tuesday night where it knocked out the country’s entire power grid, leaving 11 million people in the dark. The storm was also responsible for three deaths on the island in addition to massive structural damage, according to The Associated Press.

The emails indicate that the US and Havana are in the process of determining how much assistance is necessary, according to The Journal. Washington reportedly confirmed that Cuban authorities would prioritize hospitals, water pumping facilities, and other crucial infrastructure should the US send assistance.

The State Department did not immediately respond to Insider’s request for confirmation and comment.

Cuba’s appeal for US aid is notable given the countries’ longstanding, chilly relationship. Former President Donald Trump stoked further animosity between the nations in 2017 when his administration reversed parts of an Obama-era deal that had eased travel and commercial restrictions within the country and once more in 2021 when the US designated Cuba a state sponsor of terrorism.

Relations between the two countries have been on the mend since Biden took office, though Cuba remains on the US terrorism watch list.

Cuba’s emergency assistance request comes as one of its key economic allies — Russia — wages a months-long war in Ukraine, The Journal noted.