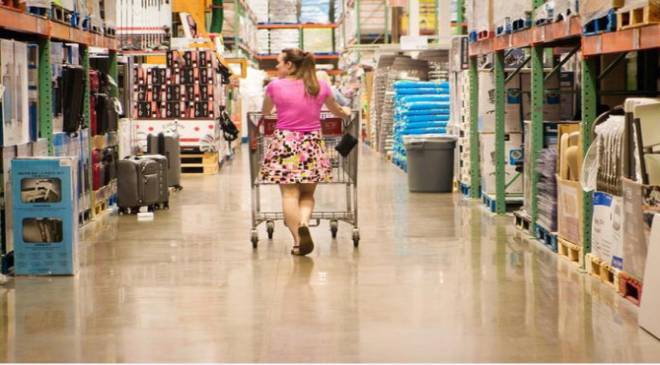 Costco is the place to go if you need to stock up on items, from food to household goods, appliances, clothing, and so much more. As we reported recently, a GOBankingRates survey found that 46% of Americans do the bulk (pun intended) of their shopping at the wholesaler, for the obvious savings, good quality, and selection of items on hand. While people may buy a wide variety of items at Costco, what actually sells the most might surprise you.’

We all know how essential toilet paper is, and that was driven home even more potently during the pandemic when stores could hardly keep it on the shelves. But apparently buying TP in bulk is so common, it adds up to a significant amount of money for Costco. According to Reader’s Digest, the company sells over a billion rolls per year and nets well over $400 million just on toilet paper alone.

Another of the best-selling Costco items isn’t even something most people buy in bulk–it comes from their food court: 100% beef hot dogs, according to Thehotdog.org. That’s probably because the time and energy it takes to do a thorough shop at the wholesale retailer leave anyone hungry. Costco sells something like 151 million every year, which adds up to $226 million. These hot dogs are so popular, as we’ve reported before, the company has committed to not raising the price of the hot dog and soda combo to anything more than $1.50 for the foreseeable future.

If you could bottle a food flavor and wear it as a perfume, bacon would probably be a top contender for meat lovers. Bacon has always enjoyed decent sales, but Costco seems to have its finger on the bacon lovers’ pulses, as they sell quite a lot of their Kirkland brand hickory smoked bacon, according to Fox Business. Something about the pandemic also drove up sales of bacon, according to Insider–perhaps all that time stuck inside made people crave comfort food. While there’s no documentation on exactly how much they sell, and inflation may have started to make a dent in sales, it appears to hold steady as a Costco fan favorite.

While most of the food items consumers buy at Costco are likely to require preparation, one item that keeps customers coming back is their precooked rotisserie chicken. According to the Wall Street Journal, Costco sold 87 million of the tasty chickens in the 2017 fiscal year. This item is such a hit, Costco then had to build in a unique supply chain in Nebraska just to keep them rolling in, hot and fresh, according to NPR.

What’s more, the company has continued to offer this popular product at the same low price of $4.99 for nearly three pounds of chicken.

According to Fox Business, while they make around $40 million dollars every year, they are actually losing money. Sometimes customer satisfaction is worth a loss.

When you think of Costco, the first thing to come to mind is probably not gasoline, but it might be after reading how cheap it is.

Costco’s sales of gasoline fuel comprise about 10% of their total sales, according to MechanicBase.com, which adds up to about $20 billion each year. They can sell millions of gallons of gas in a month at their member gas stations. While you won’t find a Costco gas station at every Costco warehouse, you can typically find plenty of them around, though the lines may be longer than a typical gas station. Costco members also get an additional discount on gas that non-Costco members don’t. According to Barron’s, depending on region, Costco members could be saving as much as $1 per gallon by purchasing Costco gasoline but on average, it’s an average of about 30 cents cheaper than the closest competitors, according to Fox Business.

While there’s no hard data on just how many major appliances Costco sells, Katie Roberts, a consumer analyst with DealNews.com says they are a popular buy at Costco for a few reasons:  “They see big discounts during holiday sales and come with an extended warranty. Around big sales holidays like Memorial Day and the 4th of July, you can expect Costco to offer various appliances for up to $800 or even $1,000 off. Plus, Costco provides members with a big perk in the form of their extended warranty, which applies to major appliances like refrigerators, dishwashers, and washers and dryers. Basically, Costco will extend the manufacturer’s warranty up to two years from the day you buy the appliance.”

Roberts pointed out that gift cards also sell well at Costco. “Gift cards are good buys at Costco because you can snag them for less than the full amount on the card. For example, we’ve seen Costco offer $50 Jiffy Lube gift cards for just $30 — that’s a 40% savings! Often the gift cards will be discounted by anywhere from 10% to 25%. One notable gift card deal going on right now is a $500 Southwest Airlines eGift card on sale for $450. That’s 10% off, and the savings could be especially helpful given the high airfare prices.”