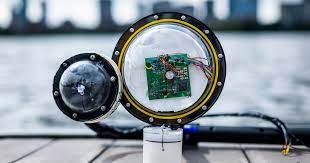 Scientists from the Massachusetts Institute of Technology on Monday presented their prototype of a fascinating underwater camera. Rather than rely on battery power, this device gets juice from sound waves traveling through the ocean for its deep sea image escapades. It even works in the darkest of environments.

Then, it has the ability to wirelessly transmit all that photo data goodness back through the water to be reconstructed on a computer.

What this means is, if the model can be scaled-up, it could spring humanity a few steps forward on the journey to achieving a massive goal: mapping every corner of Earth’s oceans.

Though our beautiful planet’s surface consists of a whopping 70% water (reminder, this doesn’t account for depth) the research team estimates we’ve only ever observed less than 5% of the sea. And one reason, they say, for such lack of knowledge is viable underwater cameras are really hard to build due to battery restrictions.

Simply, a workable imager within the sea can’t travel too far out from a ship without running out of power. It’s also expensive to make a super long-lasting battery, and not time efficient to be forced to start over an expedition every time the camera at hand must be retrieved and recharged. Thus, the newly proposed soundwave-energized camera holds potential to be a game changer for deep sea explorers.

According to an outline of the invention, published in the journal Nature Communications, the device can run for weeks on end before someone has to pick it up, allowing it to venture far out into the sea in just one go. It’s also about 100,000 times more energy-efficient than other undersea cameras, the team said.

“One of the most exciting applications of this camera, for me personally, is in the context of climate monitoring,” Fadel Adib, associate professor at MIT’s Department of Electrical Engineering and Computer Science, said in a statement. “We are building climate models, but we are missing data from over 95 percent of the ocean. This technology could help us build more accurate climate models and better understand how climate change impacts the underwater world.”

For instance, this camera could easily capture images of ocean pollution, monitor the health of fish raised in aquaculture farms — where commercial fish breeding occurs — and maybe even indicate how seaborne habitats are evolving. Right now, oceans are warming too rapidly due to human-induced climate change, and underwater animals are being ousted from their homes, forced to relocate, and sometimes, strained to adapt far quicker than their bodies can handle.

As proof-of-principle, the research crew tested their mechanism to create color images of plastic bottles floating in a New Hampshire pond. They also captured images of an African starfish in such high resolution that you can see the tiny tubercles along its arms. Overall, it appears to be a solid solution pathway to the underwater battery conundrum.

But perhaps even more exciting than the long-term implications of the team’s camera is the absolutely remarkable way it works.

Basically, the team explained, this soundwave-powered camera takes advantage of noise that’s already present under the sea. Passing ships, marine life, general tides and other such things create sound. But what is sound, exactly?

Sound isn’t an intangible force of some sort. Rather, it’s the product of waves traveling through a medium, therefore vibrating that medium on a super (super) minute scale. The medium could be air, water — anything with atoms, really. When air vibrations hit our eardrums, for example, our brain translates the signal into what we consider sound. That’s also why stuff sounds warped to us when we’re underwater. Nothing is truly “warped,” per se. Soundwaves just vibrate water molecules differently.

OK, so the important bit about this mechanism, for the team’s new camera, are those vibrations.

The small device is encased in a special material that produces an electric signal every time it’s hit by sound waves vibrating through the water. Those vibrations, in essence, vibrate it as well. Then, the vibrations are converted from mechanical energy into electrical energy, and there you have it — a steadily powered underwater camera.

Further, to keep hardware light — so the camera doesn’t eat away at its power – the team used off-the-shelf imaging sensors and cheap flash instruments that can only capture images in grayscale. From there, they used sort of an old fashioned way of obtaining a full-color image.

“When we were kids in art class, we were taught that we could make all colors using three basic colors. The same rules follow for color images we see on our computers. We just need red, green and blue — these three channels — to construct color images,” Waleed Akbar, MIT researcher and co-author of the study, said in a statement.

First, the camera captures the image with a specifically tailored red LED light filter, then again with a blue filter and again with a green one. Put together, you get the full pic. Finally, all the image data is encoded in computer language, aka ones and zeros, and here’s the kicker.

It’s sent to a receiver back as soundwaves.

The camera receiver basically transmits its own sound waves to the camera, then the camera can either reflect the waves back or absorb them fully. Altogether, this creates a sort of binary code to tell the receiver what the image data really is.

“This whole process, since it just requires a single switch to convert the device from a nonreflective state to a reflective state, consumes five orders of magnitude less power than typical underwater communications systems,” MIT researcher Sayed Saad Afzal, said in a statement.

As of now, however, the camera only possesses a maximum transmission range of 40 meters from the receiver. But the team said it wants to increase both that range and the device’s memory capacity going forward.

Eventually, they said, it could potentially capture real-time photos and perhaps even stream underwater secrets right to a computer someday.