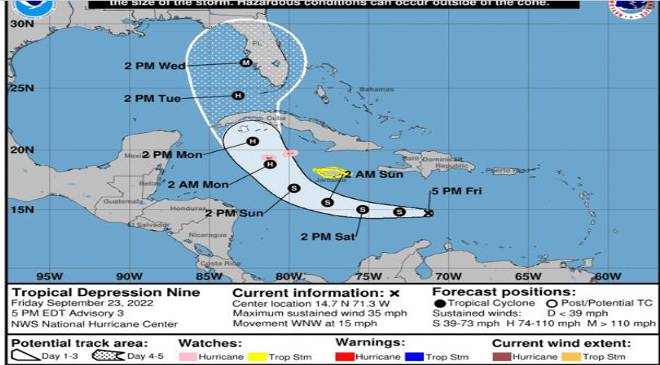 Tropical Storm Ian formed Friday in the eastern Caribbean Sea and forecasts show it strengthening into a major Category 3 hurricane as it potentially approaches Florida by the middle of next week.

It would be the first hurricane to hit the mainland U.S. this year.

The National Hurricane Center said the system is expected to hit Cuba early next week as a hurricane and then Florida on Wednesday. The NHC added residents in Cuba, the Florida Keys and the Florida Peninsula should have hurricane plans in place, though it’s “too soon to determine the exact magnitude and location” the hurricane will impact.

“Should the system get into the Gulf of Mexico, which appears to be one of the more likely scenarios at this time, areas from the Florida Peninsula to the Florida Panhandle will be at risk for a direct strike by a strong hurricane,” AccuWeather Chief On-Air Meteorologist Bernie Rayno said.

Where is Tropical Depression Nine now?

As of 5 p.m. EDT, the depression was located about 430 miles east-southeast of Kingston, Jamaica. It had maximum sustained winds of 35 mph and was moving at 15 mph.

A depression becomes a named tropical storm when its sustained winds reach 39 mph. It becomes a hurricane once its winds reach 74 mph.

Where is Tropical Depression Nine headed?

The Hurricane Center said Friday, “On the forecast track, the center of the cyclone is forecast to move across the central Caribbean Sea through Saturday, pass south of Jamaica on Saturday night and Sunday, and approach the Cayman Islands on Sunday night and early Monday.”

How will the storm impact Florida?

Early next week, the system is forecast to move near or over western Cuba as a strengthening hurricane and then approach the Florida Peninsula at or near major hurricane strength, with the potential for significant impacts from storm surge, hurricane-force winds, and heavy rainfall, the Hurricane Center said.

Florida Gov. Ron DeSantis tweeted Friday that “while the eventual track of TD9 is uncertain, Floridians should remain vigilant and ensure their households are prepared for a potential impact.”

In response to the looming threat of a strike from the storm, Gov. DeSantis declared a pre-landfall state of emergency late Friday afternoon for 24 counties that are at risk of being struck, AccuWeather reported.

Yes. The system will almost certainly be named Ian, which is the next name on the list of storm names that’s been established by the World Meteorological Organization. Tropical Storm Hermine (pronounced Her-MEEN) formed Friday afternoon off the coast of Africa, so that name has been taken.