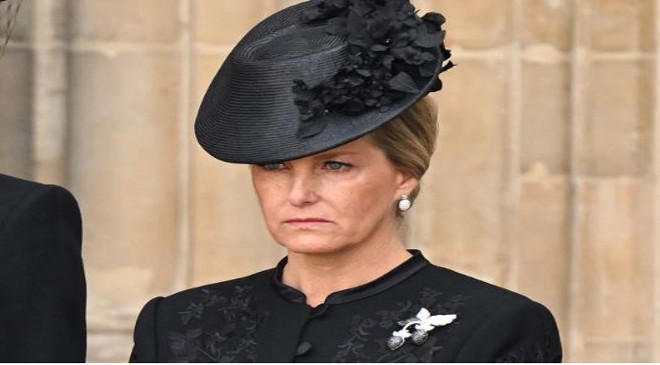 Sophie, Countess of Wessex’s sentimental style nod to Queen Elizabeth, whom she once affectionately called “Mama” during a speech at Buckingham Palace, continued on the late monarch’s funeral day with her bespoke hat.

Wearing a black straw riding hat with handmade silk flowers cascading down one side, Sophie’s go-to milliner Jane Taylor says every aspect of its design was in honor of her beloved mother-in-law.

“The Countess of Wessex is wearing a stylized riding hat in straw with a trimming of handmade silk flowers (Myrtle and Orchids),” Taylor says. “This hat was created as a nod to The Queen’s love of riding and horses. The flower trimming was inspired by the flowers The Queen had in her wedding bouquet, which again acknowledges one of the most important moments in the Queen’s life.”

Taylor, who established her hat-making company in 2004 and now has a boutique on the Kings Road in Chelsea, works with numerous royal customers including Kate Middleton, Zara Tindall and Princess Eugenie (and celebrities such as Beyoncé) and is almost always Sophie’s first choice when it comes to millinery.

Following her studies at Chelsea & Kensington College, Taylor trained under Marie O’Regan, one of the Queen’s milliners.

“We wanted to make something very special for the funeral, and we were very honored to create this bespoke hat for the Countess of Wessex,” she says.

Sophie’s daughter, Lady Louise, also wore one of Taylor’s popular headband designs on the historic and emotional day: “Lady Louise wore a crepe and satin version of the Diana headband which was perfect for a younger member of the royal family.”

But her youngest customer was Princess Charlotte, who wore a Jane Taylor felt boater complete with a velvet ribbon bow, marking the first time the 7-year-old royal has publicly worn a formal hat.

Sophie, 57, also included a subtle tribute to the monarch with her dress — the designer, Suzannah London, shared that the design included the Queen’s favorite flowers.

“Many beautiful panels of Italian wool and silk satin were embroidered as a tribute with Lily of the Valley — Her Majesty’s favourite flowers, intertwined with florals from her wedding bouquet,” Suzannah added in an Instagram post shared Tuesday.

Sophie, who is married to the Queen’s youngest son Prince Edward, attended the state funeral of Queen Elizabeth at Westminster Abbey in London on Monday and then the committal service at St. George’s Chapel in Windsor Castle.

A funeral guest exclusively told PEOPLE has been a rock for her relatives as they mourn the Queen.

“The Countess of Wessex was incredible. I saw her putting her arm around three or four people,” lawyer Pranav Bhanot told PEOPLE. “It felt like she was really the glue keeping everyone quite strong today.”

“She really seemed to be the person keeping the family together,” Bhanot explained. “There were a few bishops who started crying when they saw the Queen and she was kind of comforting them, even though she is the direct family member.”