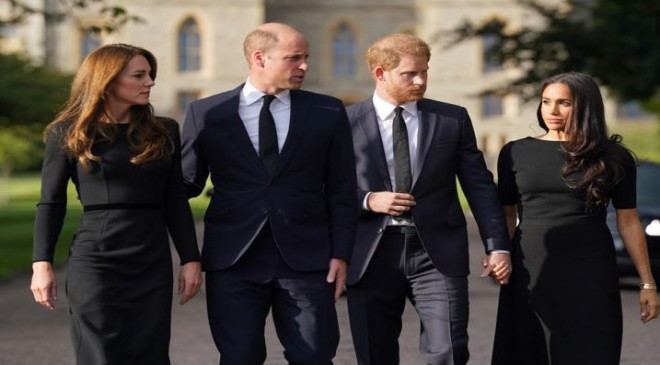 Meghan Markle attempted to make eye contact with Kate Middleton during their recent Windsor Castle appearance but Kate didn’t reciprocate. Body language experts looked at Meghan’s anxiety at the event as well as how Kate wasn’t interested in looking at the Duchess of Sussex.

Body language expert Judi James shared her analysis of Meghan with Page Six. The “Fab Four” reunited to visit with those who had gathered outside Windsor Castle following Queen Elizabeth’s death and admire the many tributes left for the queen.

The event appeared to be stressful for Meghan, with James pointing out how the Duchess of Sussex exhibited “inner anxiety” during the reunion with her “frequent hair flicking.”

“Meghan looked like a woman waiting for her cues rather than pushing herself forward,” James explained.

Meghan appeared to be fearful at the appearance, another expert said

Body language expert Dr. Lillian Glass also weighed in about how Meghan’s body language indicated that she was fearful. “Usually, we have seen Meghan with a smile plastered on her face, whether it is appropriate or not,” Glass explained.

“But this time, she actually seemed more genuine and humbled,” the expert noted. “There is no question that she was in fear, as she hung on to Harry’s hand for dear life as they walked together. She was serious and even stood back when Harry was speaking to someone.”

Glass added, “Usually, she is front and center, but the fact that she hung back was very telling of her fear.”

James further noted how Harry and Meghan’s body language indicated their support for one another, as they touched and held hands. Prince William and Kate, by comparison, didn’t hold hands during the appearance.

“William and Kate rarely touch in public and only seem to hold hands when they are out of the public eye,” James said. “This is partly to do with tradition, and as the future king and queen, they need to be seen as two individual royals rather than just as a touch-bonded couple like Harry and Meghan.”

James and Glass also looked closely at how Kate didn’t make eye contact with Meghan during the appearance.

“While William was a bit more cordial, he was still serious around [Meghan] and didn’t show his usual megawatt smile. Kate even refused to even look at Meghan or in her direction,” Glass said.

The body language expert continued, “She was being genuine. It was not in her heart to smile at Meghan, so she didn’t do it.”

Glass added, “Meghan, on the other hand, looked like a sad and desperate puppy as she tried to catch Kate’s eye gaze repeatedly. But Kate was having none of it.”

James looked at how Kate was “less keen to perform for the cameras” and was professional about the appearance.

“Walking away from Meghan and the car, she went to join the brothers before keeping a wide social space between herself and the others, looking keen to get on with the job rather than perform in any soap opera,” James explained.