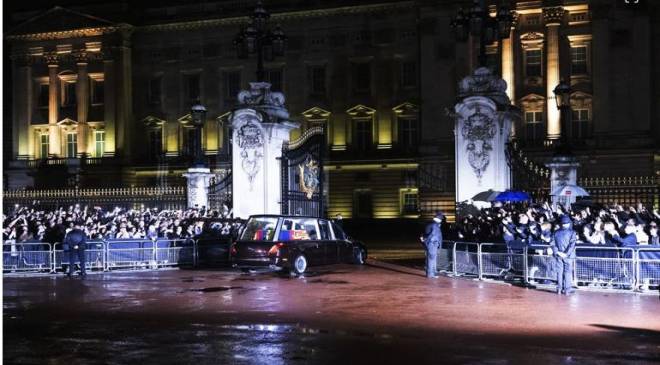 (Bloomberg) — Queen Elizabeth II’s coffin will lie in state for four days from Wednesday afternoon, amid warnings that members of the public wishing to attend to pay their respects could face a queue of up to 30 hours to do so.

A cortege will carry the coffin on a short journey from Buckingham Palace down Pall Mall, Horse Guards Parade and Whitehall, with King Charles III following on foot. He will be joined by his sons, Princes William and Harry, as well as other members of the royal family.

It will be the second time in less than a week that William and Harry have been seen side by side after the death of the grandmother, following a rift between the two brothers.

The coffin will be placed on a raised platform in Westminster Hall, the oldest part of Parliament. The lying in state will be open to the public 24 hours a day until 6:30 a.m. on Monday, the day of her funeral.

With hundreds of thousands of mourners expected to try to attend, the government has set up a queue route of more than four miles from Southwark Park, along the river Thames on Southbank, across Lambeth Bridge and into the Palace of Westminster.

“We do expect it to be extremely busy,” the prime minister’s spokesman Max Blain said when asked about the logistical challenges and whether people could realistically queue for so long. “Our focus is on ensuring they have the information needed to make the decision about what’s right for them.”

The Queen’s coffin was flown late Tuesday from Edinburgh, Scotland to RAF Northolt in west London, accompanied by Princess Anne, the Princess Royal, following the late monarch’s wishes that her only daughter should take the primary role in escorting her to her funeral.