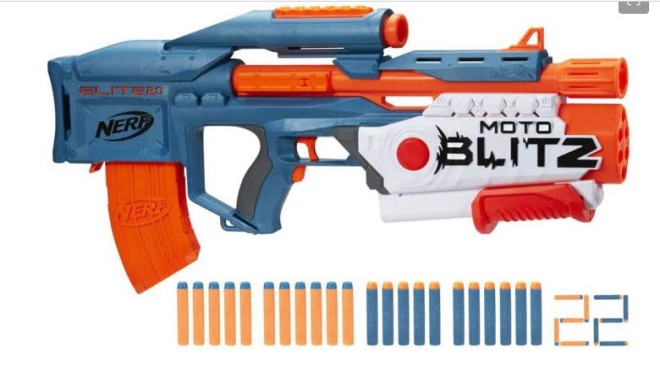 It’s easy to think, in 2022, that the simple childhood pleasure of running about in the fresh air has fallen by the wayside, shoved aside in favour of TikTok or the lures of a gaming console.

And while it may seem as though kids may prefer on-screen entertainment more than anything else, you only need the right toys to prove them wrong.

We’re talking Nerf guns; plastic toys that shoot harmless foam dart projectiles and are buckets of fun to play with while the weather’s still onside.

What is a Nerf gun?

Originally made by top toy designers Hasbro, Nerf blasters have been on children’s most-wanted wish lists to Father Christmas since the Seventies. While the premise remains the same – shooting the soft darts at a stationary or moving targets – the design has evolved to whatever’s popular in the playground at the time.

There have been toys banking on franchises like Star Wars, Marvel, G.I. Joe, Fortnite, Halo Infinite and Transformers, amongst others. Some are solo dart shooters pinging out one dart at a time, while fancier versions shower your foes with multiple darts for non-stop play.

Are there adult Nerf guns?

While they’re aimed at older kids and teens, there’s nothing to stop big kids playing with them too (adults who should know better).

Who else makes Nerf guns?

‘Nerf guns’ have also become a catchall term for the designs, with plenty of other toymakers riffing off the blast gun idea and coming up with designs of their own.

As with all play fight scenarios, safety comes first. Protect your eyes with goggles and kit younger players with knee and elbow pads to prevent injury.

With Christmas on the horizon, we’ve rounded up the best Nerf guns (and toys like them) to have you running, yelping and scheming in your garden, local park, or on a staycation. Enjoy a good old fashioned play session – with or without kids is up to you.

Make no mistake, this baby means business. The Nerf Elite 2.0 Motoblitz blaster works in dual modes to target your enemy: choose either six darts at once or 10 darts in succession, using the attached sight to help you hone in on your target. There’s power behind this thing too (4 x AA batteries are required) which means you’ll get superior range and faster reloads – all the better for playing with.

With 10 darts carried in the clip you’ll be locked and loaded for wherever your adventure takes you. Reassuringly weighty with a brightly coloured body, we loved the fact that this toy comes in plastic-free packaging too.

Suitable for players aged 8 and up, this dinosaur-themed Nerf run sprays your enemy with a shower of up to eight darts at a time. Sold with 16 darts, the rest of the ammo can be stored on board the unit so there’s no need to keep running back for more. This design requires no batteries either, cutting unnecessary waste while also keeping action in play. It’s a win-win.

One for seasoned Nerf enthusiasts, hold an impressive 25 foam darts in the Ultra One Blaster, each pushed to a top range of 36 metres, helped along with Aerofin technology on the dart tips. The black, white and orange design holds your ammo in a drum in front of the trigger, so you can see at a glance if you’re running low. It’s a motorised toy, so requires 4 x AA batteries to enjoy to its fullest.

From its name alone, this toy promises a lot, but it’s not all hype – the Bulldog delivers. Features two blasters in one, this version of a Nerf gun can switch to one-handed and back again seamlessly. The chamber has space for three darts, each to be used one at a time, allowing you to hone your aiming skins. Suitable for kids aged 8+.

From its name alone, this toy promises a lot, but it’s not all hype – the Bulldog delivers. Features two blasters in one, this version of a Nerf gun can switch to one-handed and back again seamlessly. The chamber has space for three darts, each to be used one at a time, allowing you to hone your aiming skins. Suitable for kids aged 8+.

Calling all Fortnite fans! Say hello to your new battlefield BFF. This blaster with a length of 1.1 metres, is bound to leave the opposition quaking in their boots. Perfect for taking long-distance shots, the themed blaster boasts a six-dart clip and comes with official Nerf Mega foam darts for play that’s ready straight from the box (no batteries necessary). Designed for players aged 8+, the blaster comes with a sight for pinpoint accuracy as well as the red camo wrap, which fans will recognise from the hit game.

Picture the scene: you’ve infiltrated your enemy’s HQ and are about to win your game, but wait! No more darts left in the drum. No such scenario with Nerf’s Shockwave in your arsenal: this toy can hold 15 darts, ready to fire off as and when you need them. A further 15 darts are included in the purchase, making 30 in total.

The thing about this Nerf gun is that you can customise it for the player with three tactical rails, a barrel attachment point, and a stock attachment point. The pump action blaster deploys one round at a time, firing a maximum range of 27 metres.

Okay so not technically a Nerf gun, but with firing abilities on board, we couldn’t leave out this Nerf Go Kart from our roundup. The mini vehicle, which works in two modes (pedal and freewheel), is made for playtime with a robust steel frame and chunky tyres to speed across the garden. There’s even a handbrake for making quick stops.

Firepower wise, it comes with two Blasters and a set of 10 Nerf-branded darts, ready and waiting to vanquish foes when they’re found.

Harness the power of H2O with Nerf’s Super Soaker. The toy features a three-in-one action with adjustable nozzles to help you control the pressure, aiming without the need to fire darts. The tank can hold 709ml giving you plenty of ammo to give your opposition a good spraying.

With strong Storm Trooper vibes, this blaster is ready to help you take on enemies whether they’re close, or have come from a land far, far, away. Accessories like a scope, front sight and tactical grip detach to help you create a toy on your terms – there are more than 1000 combinations to play with. And, when it comes to ammo, choose from a Long Barrel, extra Dart Stock and lots of Dart Clips. Trust us, they won’t stand a chance.

Two pastel coloured toy blaster guns are no match for the target they come with, allowing kids to finesse their coordination and aiming skills by firing soft foam balls into the targets. Made from non-toxic materials, the air-powered guns hold 48 green or yellow balls each, giving you plenty of ammunition for target practice. Easy fun that can be played indoors or out.

Register now for one of the Evening Standard’s newsletters. From a daily news briefing to Homes & Property insights, plus lifestyle, going out, offers and more. For the best stories in your inbox, click here.