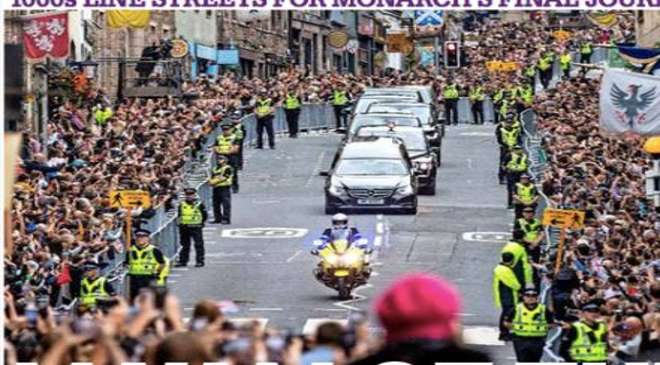 Scenes of the late Queen’s coffin being borne towards the Palace of Holyroodhouse after a slow journey from Balmoral feature on the newspaper front pages on Monday.

The Guardian’s front page, like most others, has a large photograph of the Queen’s coffin draped in the royal standard, carried by pallbearers. The headline is “The Queen begins her final journey”. Further down the page, the lead story is Russian “revenge” attacks in Ukraine.

The Financial Times banners its picture with “Queen’s coffin begins journey south as King Charles prepares for whistle-stop tour across Britain” – it also makes a Ukraine report its lead story.

“Queen’s final journey begins” says the i, and most others have some version of that wording.

The Mirror calls it the “Final journey home”.

The Telegraph and the Sun echo King Charles III, calling it her “last great journey”.

… while it’s the “saddest journey” according to the Express.

“Her final journey begins” says the Times on the front of its wraparound; the inside front says “Five-mile queue for Queen” as mammoth crowds for her lying in state are anticipated.

The Metro finds its own words: “Our gracious queen”.

The Daily Mail says “The saddest journey … now the long goodbye” and it can’t resist plugging a gossipy take about the Sussexes and the now-Waleses: “Bombshell text that sparked an unexpected show of family unity”.