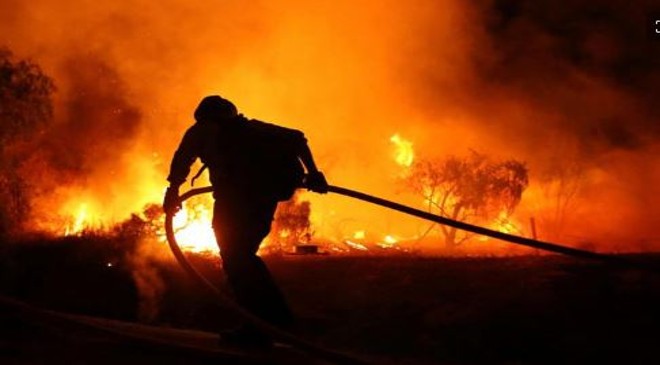 California’s power grid is facing a major stress test on Tuesday, as a historic heatwave enters its most brutal phase. With temperatures in parts of the state forecasted to hit 115F (46C), officials are asking residents to prepare for possible rolling blackouts as the heatwave reaches a boiling point.

“We have now entered the most intense phase of this heatwave,” said Elliot Mainzer, president of the California Independent System Operator (ISO), which runs the state’s electrical grid. “Forecasted demand for Monday and Tuesday is at all-time record levels and the potential for rotating outages has increased significantly.”

The state’s power supply could fall more than 5,000 megawatts short of its peak demand on Tuesday, forecasted for 5.30pm, Mainzer warned. Demand could reach past 51,000 megawatts – surpassing the record of 50,270 megawatts set in 2006.

The California ISO (CAISO) is expected to request an elevated emergency alert by 5.30pm – one step away from ordering rotating power outages.

“Outages are a significant inconvenience to those affected, but it’s preferable to manage emergencies in a controlled manner rather than let it cause a wider spread, longer lasting disruption,” according to the CAISO website.

Tuesday is the seventh straight day that California has been under a statewide alert for energy conservation. Amid a punishing heatwave that began last week and is expected to continue through Friday, the National Weather Service has also issued heat advisories across the state – warning that children and the elderly are at especially high risk for heat related illness or death.

Losing power and access to fans and air conditioning could be disastrous for these populations, as well as for disabled residents using powered medical devices.

On Monday, record breaking temperatures of 114F (45C) in Sacramento and 115F in parts of the Central Valley triggered warnings to stay indoors and cool during the Labor Day holiday weekend. Outdoor workers remain at elevated risk this week, authorities warned.

The extreme temperatures are a result of a “heat dome” bearing over the region – a ridge of high atmospheric pressure that acts as a lid, trapping in heat. Although climate crisis doesn’t cause heat domes, scientists expect it to drive more extreme weather.

Low humidity and high temperatures also elevated the risk for wildfire, turning brush to tinder. Four deaths were reported over the Labor Day weekend as some 4,400 firefighters battled 14 large fires around the state, with 45 new blazes on Sunday alone, said Anale Burlew, a deputy chief with the California department of forestry and fire protection (CalFire).

In southern California, two people were killed and one injured by the Fairview fire, which started Monday near the city of Hemet, the Riverside county fire department said. Roughly 50 miles (80km) southeast of Los Angeles, the fire had quickly spread to more than 2,000 acres by 11pm, prompting evacuations, and was only 5% contained. Multiple residential structures burned.

At the California ISO’s request on Monday, four temporary emergency power generators deployed by the department of water resources in Roseville and Yuba City were activated for the first time since they were installed last year, providing up to 120 megawatts, enough electricity for 120,000 homes.

The California ISO also has issued a flex alert for voluntary conservation between 4pm and 10pm on Tuesday, making seven alerts in as many days. Residents were urged to keep air conditioners at 78F (26C) or higher during the period and to avoid using major appliances such as ovens and dishwashers. In many areas, the late afternoon and evening are the hottest time of day.

The California ISO also issued a stage-two energy emergency alert from 6:30pm to 8pm on Monday. The second of three emergency alert stages means that the electrical grid operator is implementing emergency energy-saving measures “such as tapping backup generators, buying more power from other states and using so-called demand response programs”, according to its website. Stage three would indicate that minimum “contingency reserve” requirements cannot be met and rolling blackouts are imminent or in progress.

The use of the backup generators triggered criticism, as they would increase air pollution in already impacted, disadvantaged communities. “It is unconscionable to continue making over-polluted and under-resourced communities sacrifice zones for the rest of the state,” said Olivia Seideman, climate policy coordinator at Leadership Counsel for Justice and Accountability.

High temperature itself exacerbates pollution, accelerating the formation of ground-level ozone, or smog. In southern California, officials last week issued an ozone advisory due to the heatwave, advising people to stay indoors and avoid physical exertion.

Ironically, unsettled weather also brought the chance of thunderstorms over southern California and into the Sierra Nevada mountain range, with a few isolated areas of rain but nothing widespread. The storms also could produce lightning, forecasters said, which can spark wildfires.