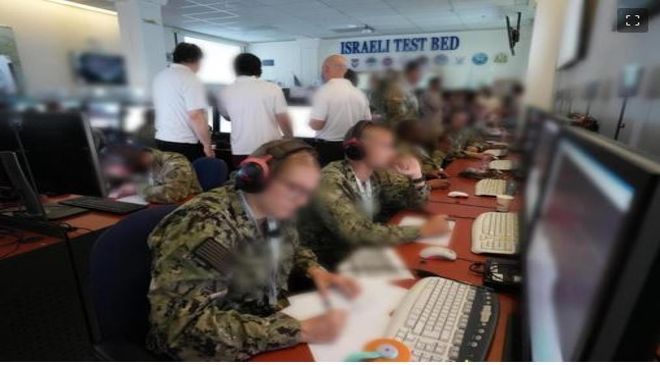 The Israel Missile Defense Organization (IMDO) held a joint simulation training exercise focusing on protecting the State of Israel from ballistic threats along with the US Missile Defense Agency (MDA), the Israeli Air Defense Command, and the US Air and Missile Defense Task Force.

The drill took place in late July at the Israeli Test-Bed (ITB) battle lab, developed by Elisra (a subsidiary of Elbit Systems). The ITB can simulate both Israeli and American air defense systems and can display and record real-time data to assist in debriefings.

“The joint simulation training exercise continues the tradition of excellent cooperation between the countries’ armed forces in order to improve the soldiers’ competency level for tactics, techniques, and procedures and strengthen coordination between the forces.”Defense Ministry

Washington and Israel have signed an agreement that would see the US come to assist Israel with missile defense in times of war and the two militaries have held numerous joint air defense in recent years.

“This exercise represents another step in our extensive cooperation with the American air and missile defense forces,” said Moshe Patel, Head of the IMDO. “The combination of the different systems significantly improves our forces’ readiness to face evolving threats on several fronts simultaneously. The battle lab, which was developed at Elbit Systems by the IMDO and the MDA over the past thirty years, is constantly adapting to meet the challenges posed by our dynamic arena.”

While the defense establishment contends that the drills are part of scheduled exercises and are not related to the high tensions with Iran, the threat posed by Iran including its nuclear and ballistic missile program is the number one priority for the IDF.

Why is Iran the number one priority for the IDF?

Iran, which possesses over 1,000 short- and medium-range ballistic missiles, continues to smuggle weapons to countries and non-state actors such as Hezbollah which is assessed to have an arsenal of between some 50,000 missiles on Israel’s northern border.

Defense Minister Benny Gantz applauded the successful drill and ongoing progress in Israel’s air defense capabilities. Gantz, who recently returned from a trip to Washington and CENTCOM headquarters in Florida, said that “the relationship between Israel and the US continues to grow stronger in the face of the region’s increasing threats and challenges, in order to maintain our security and regional stability.”

Israel moved from US European Command (EUCOM) to CENTCOM in September of last year, a move that not only simplifies the cooperation with American troops in the region but can also create the potential for a regional coalition with Arab countries that have normalized ties with Israel against shared threats posed by Iran.

“I welcome the new cooperation between CENTCOM and IDF forces,” Gantz said, adding that by “combining forces, sharing knowledge, and strengthening the air defense of the Middle East is a message to our enemies and to our partners – we are strong together, and we are ready to stand together against any challenge – from the air, land, sea, and the cyber arena.”

Commander of the Mission Control Center for Allied Procedures in the Aerial Defense Array, Brig.-Gen. (Res.) Doron Gavish said that for the first time, CENTCOM troops took part in the drill.

“The exercise was deemed very successful and constitutes an important tool to improve our readiness processes and the IDF Central Command’s transition to joint activity with CENTCOM on both strategic and operational levels,” he said, adding that “the strategic cooperation between forces is a significant component for maintaining and improving defense capabilities in the face of shared threats.”