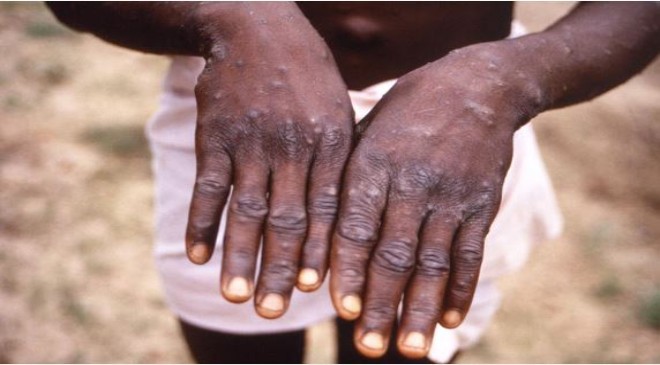 Students are returning to school this year with another virus making headlines and prompting response plans: monkeypox.

While federal health officials say the risk of monkeypox for children and adolescents is currently low, colleges and universities around New England are planning for how the virus could impact their student populations.

According to the Centers for Disease and Prevention, monkeypox is a rare disease with symptoms such as fever, headache, muscle aches, swollen lymph nodes, chills and, most notably, a rash that can look like pimples or blisters. The illness typically lasts 2-4 weeks.

Thus far, the current outbreak in the U.S., which was federally declared a public health emergency this month, has been associated with sexual contact, specifically, in most cases, between men. But health officials urge that monkeypox can infect anyone if skin-to-skin contact is shared with an infected person.

“Monkeypox can be acquired by all people, regardless of any dimension of diversity including but not limited to race, ethnicity, gender identity or expression, and sexual orientation,” the University of Vermont Medical Center said in a statement.

While most cases in this outbreak have been associated with sexual contact, monkeypox may also spread by touching contaminated objects such as toys or eating utensils; fabrics such as clothing, bedding, sleeping mats or towels; and surfaces that have been used by someone with monkeypox.

Read about what colleges and universities around New England are doing to prepare for monkeypox as students head back to the classroom and dormitories this fall.

Colleges and universities are on high alert. The close proximity of living arrangements in campus housing, social activities and intimacy between students all pose risks for potential monkeypox spread.

Schools in Massachusetts have been communicating publicly about the monkeypox outbreak, as students return to campuses.

The University of Massachusetts Amherst said it is “closely monitoring the local, regional and national public health situations” in regards to monkeypox.

“We have published university guidance on monkeypox that focuses on topics such as what is monkeypox, how it can spread, what are the symptoms, what to do if individuals experience symptoms and how individuals can reduce their risk and prevent spread,” the university said in a statement.

While monkeypox can be transmitted via sexual contact, UMass Amherst emphasized that it is not a sexually transmitted disease, and the school cautioned against the use of stigmatizing words or actions related to the virus.

UMass students who contract monkeypox are urged to seek medical care and avoid close physical contact and gatherings, as well as wear a mask and cover any rash when going to medical appointments. The university can conduct monkeypox testing, though results may take a few days.

“Talk to your partners about any recent illnesses or rashes they might have,” the school said.

At Tufts University, the school has advised students and staff of protocols if they are in contact with a person diagnosed with moneykpox. Residential students are instructed to notify Tufts Health Service, while employees and non-residential students should notify their primary care doctor.

A student or employee who is diagnosed with monkeypox should not attend work, classes or other in-person activities, Tufts said. The school also emphasized that a monkeypox diagnosis does not need to be disclosed to instructors or supervisors.

“If you need to miss school or work due to illness or isolation, we encourage you to take good care of yourself, your health, and your well-being,” the school wrote.

At the University of Vermont, health officials have said they’re looking at a required two-to-four week isolation period.

According to ABC6 and WPRI, student health services providers and staff at the University of Rhode Island have been trained to identify monkeypox, and the school’s laboratory is prepared to collect and send samples of the virus for testing, said Dr. Christopher Nasin, URI’s medical director.

Nasin said the university is mimicking how it managed the COVID-19 pandemic, and taking monkeypox “very seriously.”

How many monkeypox cases are in New England?

As of Aug. 31, across Massachusetts, Rhode Island, Connecticut, New Hampshire, Vermont and Maine, there have been approximately 465 monkeypox cases, according to the CDC.

Massachusetts has seen the most cases, and Maine and Vermont have seen the fewest. Nationwide, there have been 18,989 total confirmed monkeypox cases.

Is there a monkeypox vaccine?

There is a monkeypox vaccine, but it is prioritized for individuals at the highest risk of exposure to someone with the virus, according to Mass General Brigham.

The vaccine most commonly used for preventing monkeypox infection is JYNNEOS, which has been licensed by the U.S. Food and Drug Administration.

Addressing myths about monkeypox: A look at symptoms, treatment and other common questions

The supply is incredibly limited. Massachusetts has received several allocations of vaccine from the CDC since July 5, the state said, but additional vaccine is not expected by the federal government until the fall.