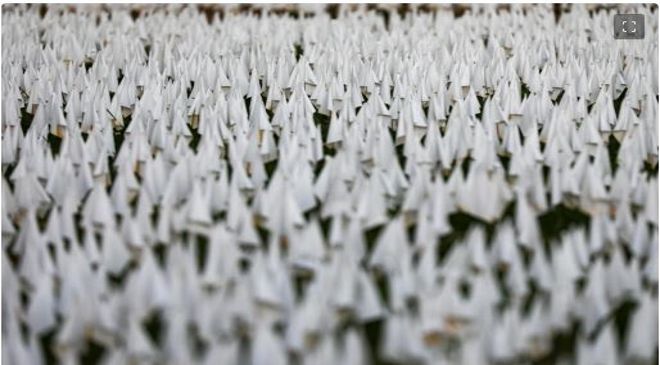 U.S. life expectancy estimates have fallen to the worst levels since 1996, according to a new federal report, marking the second straight year of plummeting estimates in the wake of the COVID-19 pandemic.

Health officials say the drop in life expectancy from 2019 to 2021 – falling by 2.7 years to 76.1 – is now the country’s worst two-year decline on record since 1923, according to provisional estimates published by the Centers for Disease Control and Prevention’s National Center for Health Statistics.

More than one million Americans have COVID-19 listed as a cause on their death certificates to date, according to the latest data tabulated by the agency.

“Unintentional injuries” was the second biggest overall reason for the worsening estimate, driving 15.9% of the decline. Those “were largely driven by drug overdose,” the report’s authors wrote.

However, the impact of these causes varied widely among demographic groups.

COVID-19 was responsible for 35% of the life expectancy decline in Black Americans, and 21.4% of the decline in American Indian and Alaska Native people.

During the first year of the pandemic, the agency had reported that Hispanic Americans saw the worst drop in life expectancy of any group, with 90% of their decline blamed on COVID-19.

During the second year of the pandemic, the Hispanic population saw only a “slight decline” of 0.2 years in their life expectancy. “Unintentional injuries” outpaced COVID-19 as driving the drop in life expectancy among Hispanic Americans.

COVID-19 was not the leading cause for a decline in life expectancy among Asian Americans. Instead, cancer drove 21.4% of their decline last year.

The figures echo disparities in COVID-19 deaths over the course of the pandemic, which the agency reported earlier this year shifted substantially as vaccines and treatments rolled out across the country. As a result, some long-running disparities in life expectancy narrowed last year, compared to 2020.

The life expectancy advantage between White and Black Americans shrank by 5.1% from 2020, with just 5.6 years separating the two groups.

In 1993, Black Americans had a life expectancy that was 7.1 years worse than their white counterparts. By 2019, before the pandemic, that gap had shrunk to 4 years.

Other gaps widened last year, however.

The report found that the difference in life expectancy between men and women widened from 5.7 to 5.9 years in 2021. This gap by sex had fallen to just 4.8 years in 2010.

The estimates offer one of the earliest looks into the impact of the second year of the COVID-19 pandemic on American life expectancy.

More detailed figures and breakdowns for 2021 are expected over the coming months.

More detailed figures and breakdowns for 2021 are expected over the coming months.

For example, the agency last week released final estimates broken down by state for 2020, which saw life expectancy in the first year of the pandemic drop in every state and the District of Columbia.

The report comes as federal health officials say they are bracing for another potentially deadly wave of infections this winter.

Since mid-April, the U.S. has averaged between 300 and 400 daily COVID-19 deaths, according to CDC data, close to double the lowest levels seen during June and July of 2021.

However, the pace of new COVID-19 deaths for now remains only a fraction of the fall and winter waves from last year.

Modelers say the imminent rollout of new COVID-19 booster shots could prevent thousands of COVID-19 deaths over the coming months, though even the most optimistic scenario could result in some 111,000 more deaths nationwide.

“Even now, we are still at about 400 deaths a day,” CDC Director Dr. Rochelle Walensky said at a meeting of her advisers earlier this month. “And that — we’ve become accustomed to saying it — but I don’t feel like that can be a number that we are okay with staying at.”

“I think we really do need to continue to recognize that that is well too many deaths than we should be comfortable with,” Walensky added.