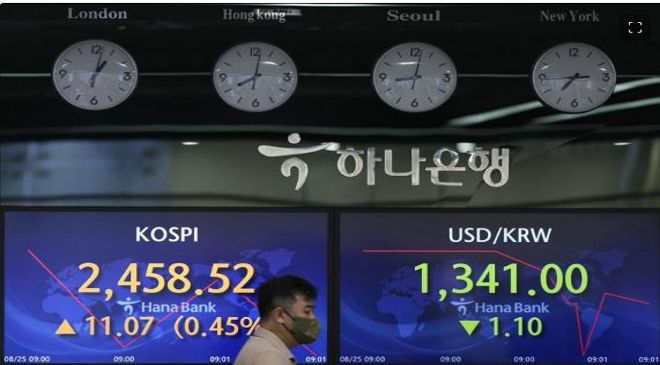 TOKYO (AP) — Global shares gained Thursday as investors awaited a highly anticipated speech by the U.S. Federal Reserve chair about interest rates at the end of the week.

Benchmarks rose in Europe in early trading after finishing higher in Japan, Australia, South Korea and China. Trading was temporarily delayed in Hong Kong by a storm.

Market watchers say share prices are likely to sway for some time, regardless of whether the focus is on controlling inflation or recession risks. In Asia, a wait-and-see mood has set in during recent sessions, as markets look for signs from the Fed.

“Market participants may want to see a more consistent recovery as a gauge of policy success before confidence is lifted,” said Yeap Jun Rong, market strategist at IG in Singapore.

Chinese shares have declined this week amid recent policy rate cuts by the People’s Bank of China, which also announced policies to stimulate the economy.

The Bank of Korea raised its key policy rate by 0.25 percentage points to 2.5% in an effort to fight inflation, even as signs of inflationary pressures appeared to be gradually easing.

A recent surge in prices of fresh food remains a risk, according to market analysts. The Bank of Korea said the nation’s gross domestic product — the total value of a nation’s products and services — is projected to grow by 2.6% in 2022 and 2.1% in 2023.

South Korea’s economy has recovered rapidly as consumption rebounded and COVID-19 restrictions were eased, but growth is likely to weaken as exports decline amid a global slowdown, the central bank said.

Stocks have been driven higher through the summer on hopes that inflation was near its peak and that the U.S. Federal Reserve may hike interest rates less aggressively than earlier feared. But recent comments by Fed officials have cooled such expectations, sending Wall Street on Monday to its worst day in months. Discouraging reports on the economy have meanwhile highlighted the risk of a recession.

Wall Street’s focus remains centered on Friday, when Fed Chair Jerome Powell gives a speech at an annual economic conference in Jackson Hole, Wyoming. It’s been the setting for market-moving speeches in the past, which has investors hoping Powell will offer clarity on further rate hikes.

Higher interest rates slow the economy in hopes of undercutting inflation. But they also risk choking off the economy if done too aggressively, and they pull down prices on all kinds of investments.