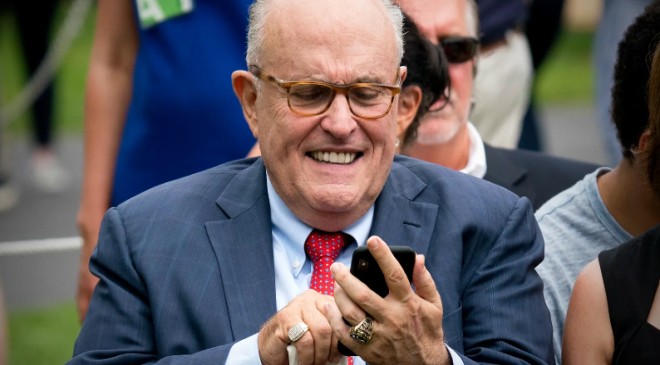 As former President Donald Trump takes millions of dollars out of his donors’ pockets and puts it toward his legal defense, Trump’s former top personal attorney is, once again, hat in hand for his own lawyers—and borrowing an old trick from Roger Stone.

A campaign finance receipt filed recently has quietly revealed that Rudy Giuliani’s legal defense fund, all but left for dead a year ago, has life in it yet.

And Giuliani, who is defending himself with multiple lawyers on numerous fronts—from a foreign lobbying probe, civil election suits, and a grand jury investigation into whether Trump interfered in Georgia’s elections—might be able to use the help.

Giuliani’s zombie fund isn’t on the public record at the moment. Unlike political or charitable contributions, donations go straight to Giuliani personally; the donors aren’t required to be disclosed. A Square donations landing page puts the fund’s address in West Palm Beach, ​​not far from Mar-a-Lago, but other than that there isn’t much information.

However, because a new payment appeared in a Federal Election Commission report—from former Oklahoma Republican senatorial candidate Jackson Lehmeyer—it was publicly visible. The filing showed a $5,000 transfer on June 6 from the campaign to the Rudy Giuliani Freedom Fund Legal Defense Trust Fund.

The purpose of the expense, according to the receipt, was “advertising.”

While that category may seem odd, Giuliani—the former spokesperson for both LifeLock and Fraud Guarantee identity theft protection services—had addressed a Lahmeyer rally just four days before the payment. And he happened to use that opportunity to endorse the Oklahoma pastor.

Notably, Giuliani was joined onstage that day by fellow personal legal defense fund icon Roger Stone, himself a Lahmeyer adviser and endorser who received $20,000 two days after Giuliani got his $5,000 check.

While that $5,000 might not stack up to Stone’s check, it still represents more than half the total amount that Giuliani’s defense fund raised last year before it was unceremoniously shuttered, as The Daily Beast previously reported.

While Giuliani has never seemed to charge candidates for his endorsement previously, the move is a favorite of Stone’s.

In the months since Giuliani’s first defense fund closed, Giuliani’s fundraising pages have remained active on WinRed. But reporting during that period has been scant.

That may be by design.

A Giuliani associate who is regularly briefed on the former mayor’s legal efforts told The Daily Beast that the defense account was news to him.

“I’m sure the lawyers are all in favor of it,” the associate added, citing the “enormously expensive” legal costs Giuliani incurred as numerous investigations and lawsuits have piled up over the last three years.

Some of that legal trouble stemmed from his work for Trump. But despite Giuliani’s famously close friendship with the ex-president—and the legal work done on his behalf for the last several years—Trump hasn’t cut his longtime friend a single check for attorney’s fees in the political public record.

Trump has, however, paid millions recently to attorneys representing possible witnesses against him in the ongoing Jan. 6 House investigation.

As for Giuliani, he reportedly rankled Trump when he asked for $20,000 a day for his post-election work. He ended up receiving nothing from the Trump campaign outside of about $76,000 in reimbursed travel expenses a month after the insurrection.

By contrast, Stone’s consulting company has raked in a total $180,000 from Lahmeyer, who lost the primary in late June, a few weeks after the Giuliani rally.

During that speech, Giuliani delivered a maundering litany of familiar gripes against “communist” teachers unions, George Soros, the IRS, and the FBI—“state police” who want to “destroy you and me,” in Giuliani’s words.

More notably, perhaps, Giuliani admitted to the friendly crowd that he had tried to “overturn” the 2020 election.

“We would’ve had success in overturning that election,” he said.