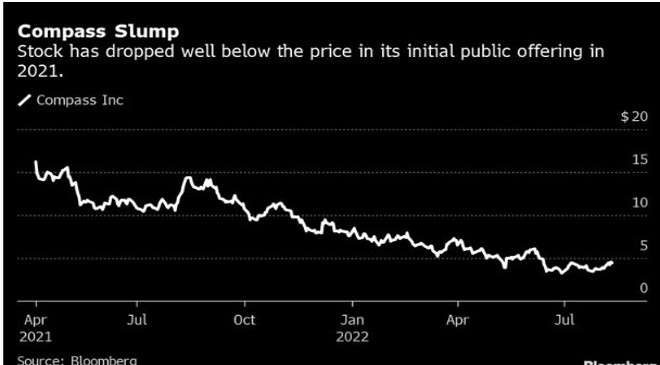 Robert Reffkin waltzed into the real estate world a decade ago, using connections honed as a Goldman Sachs Group Inc. banker to raise money for a technology-powered brokerage he promised would upend the industry.

His company, Compass Inc., spent more than $1 billion to become a go-to home seller in New York, Miami and Los Angeles, and rode the pandemic housing boom to an initial public offering. It sold more residential real estate last year than any other brokerage and its revenues made Reffkin one of the 10 youngest Fortune 500 chief executives and the only Black founder on the list.

But Compass has yet to generate an annual profit. In June, the company laid off 450 employees, 10% of its salaried staff, and signaled that further cost-cutting measures could come. Now, as Reffkin prepares to brief investors on Compass’s second-quarter earnings, he’ll have to convince them that a company that couldn’t make money in the hottest housing market ever can turn a profit as US housing cools.

Compass isn’t the only real estate player stuck between a need for growth and slowing sales. While the second quarter was just the start of the housing pullback, Zillow Group Inc, Redfin Corp. and Opendoor Technologies Inc. have all warned investors that market conditions will likely weigh on third quarter results. Shares in Compass fell 5.1% to $4.46 at 10:49 a.m. Monday, down roughly 75% from its initial public offering price in early 2021.

“The questions are there for a lot of technology companies and a lot of real estate companies, but Compass has a bigger problem than anyone else,” said Mike DelPrete, a scholar-in-residence at the University of Colorado Boulder’s Leeds School of Business who invests in real estate startups. “They come from a place of easy capital, and they grew and grew, but they didn’t reach escape velocity.”

For years, it was Compass’s deep pockets that set it apart. The company raised roughly $1 billion from SoftBank Group Corp., the technology investor whose CEO Masayoshi Son is known for urging founders to pursue breakneck growth.

Reffkin’s conversations with Son were limited, according to people familiar with the relationship, who asked not to be named because the discussions were private. But Reffkin didn’t need much of a push. When Son asked Reffkin to move faster and agreed to provide funding, the Compass boss happily followed the advice, one of the people said. A SoftBank representative declined to comment.

Compass used rich incentives to recruit top agents and hired engineers to build bespoke software that competitors bought off the shelf. In one act of venture-capital induced hubris, it sought to disrupt the for-sale lawn sign, developing round placards that would illuminate when they sensed motion and send notifications to nearby smart phones with the Compass app installed. The signs, initially priced at $700 each, didn’t catch on.

“What they’re doing, it doesn’t make sense,” said Bess Freedman, CEO of rival brokerage Brown Harris Stevens. “They’re not a technology company. They’re a real estate brokerage company that just spent far more than they were making. The question now is, how is it sustainable?”

While competitors scoff at Compass’s spending, Reffkin says that he was filling a moat, not pouring money down the drain. In a recent interview, he said that his company’s technology makes agents more productive by combining tools to schedule showings, create marketing campaigns and manage closings. The company, which plans to complete its core platform in the next few months, sees that as a way to boost revenue from existing agents and recruit new ones.

“We have a platform that we invested over $900 million in and no one’s going to recreate in the foreseeable future,” said Reffkin. “I’m hopeful that we will see in a downturn Compass gain market share largely driven by the investments we made when times permitted those investments.”

Compass began preparing for a housing slowdown at the beginning of the year, Reffkin said. He described the layoffs and other spending cuts as reordering short-term priorities to reduce costs. Instead of expanding geographically, it’s aiming to recruit mid-range agents in the 71 markets where it already operates. The company, which in the past has grown by buying competing brokerages and software companies, will also suspend new acquisitions.

Still, Compass, which reported a $494 million loss on $6.4 billion in revenue last year, is aiming to generate positive cash flow by 2023. It’s already improved the profitability of its agent network and expects more revenue from nascent offerings around mortgage lending and closing services.

Cooler homes sales won’t help. Compass had more than $475 million in cash and cash equivalents at the end of March, positioning it to weather a downturn. It could cut spending on things like marketing and office leases, said Jason Helfstein, an analyst at Oppenheimer. But the company needs to keep growing to hit its goals.

“They have to get bigger,” said Helfstein. “That’s all.”

For now, Compass is a bust for many investors. SoftBank’s stake is now worth about $622 million, though the firm is facing substantial losses on other investments, too: It reported a $23 billion loss in the second quarter, as the global stock market sell off hammered DoorDash Inc, Coupang Inc. and other holdings.

Reffkin himself stands to lose out on a windfall, too. In the past two and a half years, he’s been awarded more than 17 million shares that accrue to him in chunks if the share price tops thresholds ranging from $23.14 to $77.13 — a potential haul worth between $50 million and $1.3 billion. That would come on top of a different grant of 8.6 million shares that he’s currently collecting in monthly increments through December 2023, regardless of Compass’s share price or financial results.

In the interview, Reffkin said he was committed to increasing his company’s share price. After spending a decade building tools that made life better for real estate agents, he was ready to take on a new challenge.

“How can the company be best in the world at making the brokerage firm more productive?” Reffkin said.