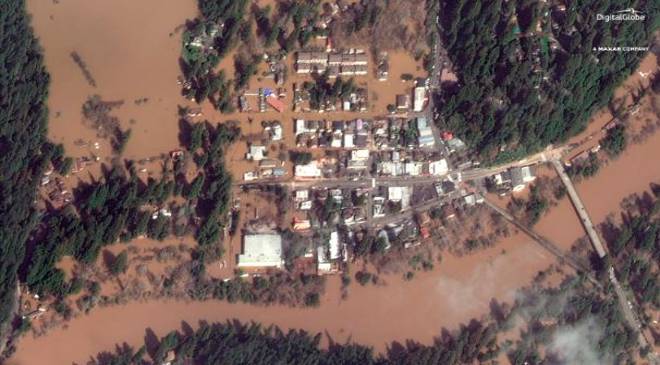 “Megadrought” may be the main weather concern across the West right now amid the constant threat of wildfires and earthquakes. But a new study warns another crisis is looming in California: “Megafloods.”

Climate change is increasing the risk of future floods that could submerge multiple cities and displace millions of people across California, according to a new study released Friday.

It says that an extreme month-long storm could bring feet of rain – in some places, more than 100 inches – to hundreds of miles of California. Similarly unrelenting storms have happened in the past, before the region became home to tens-of-millions of people.

Now, each degree of global warming is dramatically upping the odds and size of the next megaflood, the study says.

In a future scenario, where the flood comes in a hotter earth, “the storm sequence is bigger in almost every respect,” said Daniel Swain, UCLA climate scientist and co-author of the study, in a news release. “There’s more rain overall, more intense rainfall on an hourly basis and stronger wind.”

Climate change a factor in megafloods

In fact, the study found that climate change makes such catastrophic flooding twice as likely to occur.

Swain said that such massive statewide floods have occurred every century or two in California over the past millennia, and the current risk of such events has been substantially underestimated.

Long before climate change, California’s Great Flood of 1862 stretched up to 300 miles long and 60 miles across. According to the study, a similar flood now would displace 5-10 million people, cut off the state’s major freeways for perhaps weeks or months with massive economic effects, and submerge major Central Valley cities as well as parts of Los Angeles.

The study expands upon the 2010 “ArkStorm scenario,” which is named after the atmospheric rivers that would fuel the flood – one of biblical proportions. This is the first part of a plan to revisit to that scenario, known as ArkStorm 2.0.

Massive California flood would be a $1 trillion disaster

It is estimated that a flood like the one that happened in 1862 would be a $1 trillion disaster, according to UCLA.

“Parts of cities such as Sacramento, Stockton, Fresno and Los Angeles would be under water even with today’s extensive collection of reservoirs, levees and bypasses. It is estimated that it would be a $1 trillion disaster, larger than any in world history,” according to the statement.

With drought and wildfire getting so much attention, Californians may have lost sight of extreme flooding, Swain said in the release. “There is potential for bad wildfires every year in California, but a lot of years go by when there’s no major flood news. People forget about it,” he said.

The researchers used new high-resolution weather models and existing climate models to compare two extreme scenarios, according to UCLA: one that would occur about once per century in the recent historical climate and another in the projected climate of 2081-2100.

Both would involve a long series of storms fueled by atmospheric rivers over the course of a month.

What are atmospheric rivers?

Atmospheric rivers are ribbons of water vapor that extend thousands of miles from the tropics to the western U.S. At 250 to 375 miles wide, they provide the fuel for the massive rain and snowstorms that can cause flooding along the West Coast.

Though beneficial for water supplies, such events can wreak havoc on travel, bring deadly mudslides and cause catastrophic damage to life and property, the National Oceanic and Atmospheric Administration said.

Friday’s study was published in the peer-reviewed journal Science Advances, a publication of the American Association for the Advancement of Science.