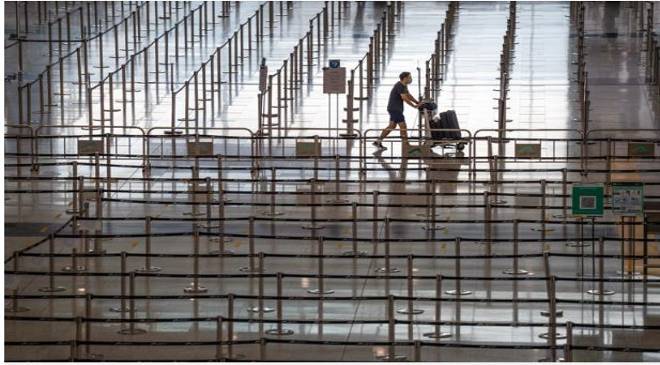 The number of bookings for flights to the financial hub increased 249% on Monday, the day the decision was announced, from a day earlier, according to data from Trip.com. Outbound flight orders rose 176% from the previous day, the data showed. Inbound bookings are mainly from places including Bangkok, London, Taipei, Singapore and Manchester, while those from Hong Kong mainly plan to fly to similar destinations, according to Trip.com.

The surge on China’s largest online travel agency likely reflects increased demand from mainland residents looking to use Hong Kong as their stopover as its Covid rules are less stringent. From Friday, the city requires arrivals to spend three nights in a hotel — down from seven currently — followed by four days in which they’re restricted from entering high-risk places like bars and hospitals.

Although traveling to the mainland from Hong Kong still requires seven days in a hotel, then three days of health monitoring, many mainland residents come through the city as it’s the easiest way to reach China because international flights to the country are rare and costly. Returning mainland students during the summer holiday have been blamed for a shortage of hotel rooms in recent months.

Still, travelers to Hong Kong need to contend with a number of hurdles, including securing a hotel room, which are both costly and in short supply. People will also have to delay their plans if they test positive in the days before their flight, and risk being sent to a central quarantine facility if they’re found to have Covid once they arrive in the city.

While the reduction of quarantine time is a welcome change for many people, who have previously had to spend as many as 21 days in a hotel, business groups say Hong Kong needs to scrap the policy entirely in order to rescue its global standing. Several of Wall Street’s biggest banks have made quarantine-free travel a precondition for senior executives to attend a November conference designed to trumpet the financial hub’s revival.