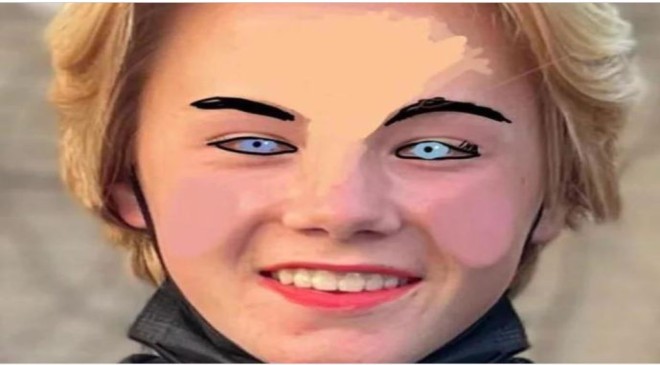 A young girl’s unique approach to photo editing has left the internet in stitches this week after the results were shared online.

Photo editing is often a difficult subject, with a recent survey finding that 70 percent of people edit their selfies. Recently, a dad’s reaction to the suggestion of editing his daughter’s photo was praised, while a company was slammed for digitally lightening employees’ skin for them to appear “whiter” on their official website.

On Thursday, mom Megan from Silicon Valley, California shared a picture of her 15-year-old son Grady on the discussion site Reddit, which has since received more than 57,000 upvotes.

The picture had been amended by the boy’s 9-year-old sister Parker ahead of him going to a new high school. Said to be to “smooth out her brother’s acne,” the thoughtful amendments had left the picture looking incredibly touched up, and delighted internet users who were left in stitches.

Megan told Newsweek: “He’s excited for high school, and this morning they were eating breakfast and she was busily working on making him more ‘beautiful.’ He thought the picture was funny they sent it around the family. I threw it up on Reddit and in 3 hours it had made #1.”

Delighted by Megan’s efforts, Redditors rushed to the comments to share their thoughts and reactions.

One commenter said: “I can’t argue that she made him very, very smooth,” while another Redditor wrote: “That’s yearbook material.”

“I love that she made his eyebrows blacker than my soul and gave him some sexy red lipstick,” said another reply. While one viewer of the viral image joked: “Typical sister response ‘oh you want me to remove your acne? I’ll fix everything else I think is wrong with you, no charge.'”

After learning of the viral attention the image had received, the kids were both very excited: “He was super excited to go viral like most 15-year-olds,” said Megan: “And his sister’s head just about popped off when I showed her.”

“Your son’s a real doll face,” joked one commenter on the post. Another Redditor said: “It’s great that your daughter is learning new skills and trying to implement them. That is probably the hardest part of learning something new. Kudos to her.”

The delighted kids read all of the comments on the viral post, and Megan says they thought they were very funny. “Luckily there weren’t too many that were mean or anything,” she said: “My son is very progressive and could have cared less that everyone was calling him a girl. His girlfriend thought it was hilarious too.”

In fact, many commenters pointed out that the budding photo editor had completely nailed the brief: “I mean in her defense you can’t see the acne,” said one reply.