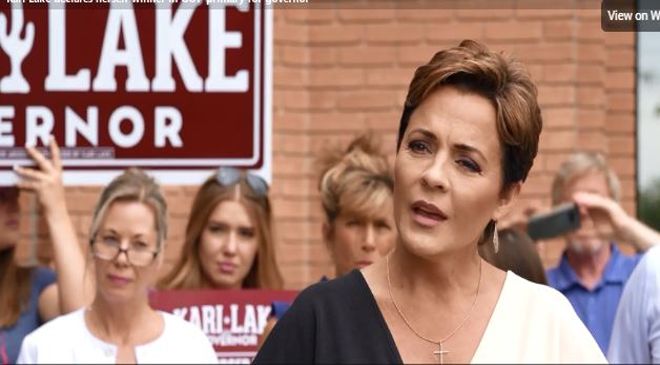 Former television news anchor Kari Lake has won the Republican nomination for Arizona governor, climbing past her opponent’s early lead and rounding out the victory for Trump-backed candidates in the swing state.

Having never held elected office before, Lake turned her more than two-decade career as a newscaster for Fox 10 in Phoenix into political success in part by attacking the news industry that made her locally famous.

Along the trail, she pledged to secure the state’s southern border using an untested legal theory and eradicate homelessness through a combination of providing more resources and criminalizing those who didn’t take advantage of them. Though Lake had already declared victory a day prior, she did so again in a statement Thursday evening, and raised further doubts about the election process.

“Though the results took longer than they should have, Arizonans who have been forgotten by the establishment just delivered a political earthquake,” Lake said. It is typical that election results can take several days as counties tally mailed, dropped off and in person ballots.

Taylor Robson, the real estate developer and former member of the Arizona Board of Regents, had a commanding lead among early voters. But Lake, who has spent months lambasting early voting and believes all voting should happen on a single day, picked up two election day voters for each one that cast a ballot for Taylor Robson.

Ultimately, those voters helped push Lake to win the Republican nomination. Lake now will campaign against Democrat Katie Hobbs, Arizona’s secretary of state, in the November general election. Arizona Gov. Doug Ducey, who is in his eighth year in office, has reached a term limit and cannot run again.

Speaking to reporters Wednesday, when she first declared victory, the 52-year-old Lake said she hoped Taylor Robson, who had “put a lot of blood, sweat and tears into this battle,” would support her bid for governor.

Asked how Lake might court Taylor Robson’s support following the bitter attacks of the campaign, Lake offered a personal story from growing up as the youngest of nine siblings in Iowa.

“You have good times, you have bad times, you have fights, and you have some dysfunction, but at the end of the day, you’re still brothers and sisters, and you’re still family,” Lake said. “And we are family in this Republican Party. We don’t maybe agree on every single thing. but I think we agree on the most important issues of the day. And I believe that Karrin will come in because I know for a fact Karrin loves this state.”

Though she had said just a week prior that she had detected “stealing going on” in this year’s election, Lake has refused to provide evidence. In declaring victory, she said her supporters “out-voted the fraud.”

Lake’s narrow victory comes after a 15-month campaign that saw unprecedented spending to defeat her and controversies over shadowy fundraising groups working to support her victory. The race quickly became viewed as the latest test of Trump’s power within the Republican Party, and his endorsement last fall certainly helped boost Lake.

Trump-endorsed candidates seeking statewide office had a banner night in Arizona on Tuesday, with each winning their party’s nomination in sometimes crowded fields.

A late-in-the-race campaign rally Trump held in Prescott Valley also helped energize support for Lake, and happened to fall on the same day Ducey and former Vice President Mike Pence held events elsewhere in the state for Taylor Robson. The duel brought more attention to Arizona, a battleground state that political observers say either party could win in November.

In nominating Lake, Republican voters showed they are still allegiant to Trump and ready for a departure from Ducey’s establishment arm of the party that rallied behind Taylor Robson.

While Taylor Robson painted Lake as a phony conservative because of her past support of Democratic President Barack Obama, Lake attacked Taylor Robson as akin to electing Ducey for another four years. On policy, the two leading candidates had many similar priorities, including securing the state’s southern border, expanding school choice and improving teacher pay.

The Republican field featured two other candidates, and a third, former Congressman Matt Salmon, who ended his bid for governor in June but did so late enough he still appeared on ballots. Salmon and Mesa businessman Scott Neely each drew votes that could have made the difference between a Lake and Taylor Robson victory. Former businesswoman Paola Tulliani-Zen of Scottsdale trailed the race leaders significantly.

On to November’s general election

With each party’s nominees for governor locked in, candidates are now focusing on November and drawing in Arizona’s independent and moderate voters.

Lake and Hobbs have differences that go beyond their party and policy priorities.

Lake is one of the state’s loudest voices furthering Trump’s false claims that he won the election in 2020. Dozens of lawsuits across the nation and the Arizona Senate’s ballot review have found no evidence of widespread, outcome-changing fraud. Hobbs, meanwhile, has defended the election that was her constitutional duty to oversee.

Hobbs has called for Arizonans to look forward instead of staring back to 2020, but that is likely impossible given the role false claims have played in Lake’s campaign.

“This race for governor isn’t about Democrats or Republicans,” Hobbs said in a statement late Thursday. “It’s a choice between sanity and chaos. And it’s about electing a leader who will govern with vision and strength. I’m confident Arizonans will reject Lake and her embarrassing sideshow, and we will win in November.”

A lingering question is who more traditional Republicans, those who have supported the late Sen. John McCain and align with Ducey, will support — or whether they will sit out the race altogether.

The Arizona Democratic Party has already signaled it will court those voters to support Hobbs, releasing a list of all the insults Lake has lobbed at her fellow Republicans, calling them Republicans in name only and “lords of the swamp.”

“Will the same Republicans that Lake’s insulted hold their noses to support her?” Josselyn Berry, a party spokesperson, said.