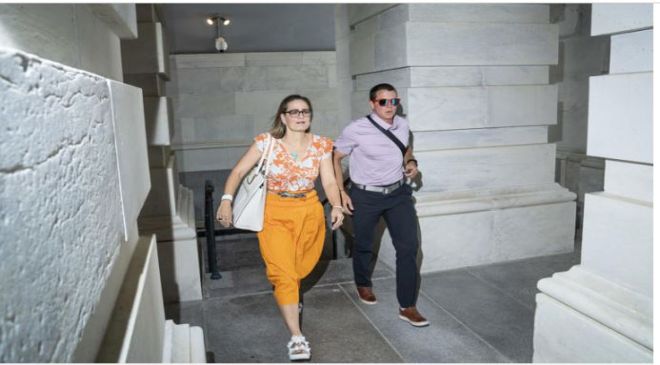 Sen. Kyrsten Sinema (D-Ariz.) said she would soon be ready to “move forward” on a revised version of Senate Democrats’ health-care, climate and deficit-reduction package, opening the door for party lawmakers to adopt the long-stalled bill as soon as this weekend.

Sinema offered her must-have support after Democratic leaders agreed to scale back some of their original tax proposals, capping days of speculation about her public silence and moving her party one step closer to fulfilling a central element of President Biden’s economic agenda.

In a statement, Sinema said Democrats had “agreed to remove” a key tax policy targeting wealthy investors that aimed to address what is known as the “carried interest loophole.” She also signaled they had made additional tweaks to a second provision that imposes a new minimum tax on corporations that currently pay nothing to the U.S. government.

The latter set of revisions are likely to benefit some manufacturers, according to two people familiar with the matter, who spoke on the condition anonymity to describe the unreleased details. Many corporate executives, including local Arizona business leaders, had petitioned Sinema to consider the consequences of the tax in recent days.

With it, Democrats opted to seek a new 1 percent tax on corporate stock buybacks, a move that would make up at least some of the revenue that might have been lost as a result of the changes, the two people familiar with the matter said. And party lawmakers agreed to set aside new money at Sinema’s request to respond to climate issues including drought, according to the sources.

From here, Sinema said she would await a final review from the chamber’s parliamentarian — a critical step in the process that allows Democrats to move their spending bill — at which point she would “move forward” on the measure known as the Inflation Reduction Act of 2022. Biden hailed the development, describing it in a statement late Thursday as a “critical step toward reducing inflation and the cost of living for America’s families.”

“I look forward to the Senate taking up this legislation and passing it as soon as possible,” the president said.

Sinema had not been a player in those talks, even though she is a key Democratic swing vote, at times skeptical of her own party’s tax-and-spending ambitions. Her public silence in recent days fueled speculation that she may have harbored serious reservations about the new bill, a successor to the roughly $2 trillion Build Back Better Act that House Democrats adopted last year. Even Republicans at one point sought to seize on the uncertainty, urging Sinema to buck her own party.

In recent days, Manchin had remained steadfast in his support for the deal he struck, the original version of which was expected to generate more than $768 billion in revenue over the next decade. Any change to assuage Sinema threatened to reduce the roughly $300 billion expected to be available for deficit reduction, a major issue for Manchin.

Democrats did not offer a full, new estimate for their revised tax policies late Thursday. In a statement, though, Schumer said he expected it would “receive the support of the entire Senate Democratic conference.” And he said the bill would still reduce the deficit by $300 billion.

The agreement allows the party to proceed under Schumer’s timeline, beginning debate on the measure with a vote as soon as Saturday. To prevail, Sinema’s vote is crucial: Only by banding together can Democrats overcome a Republican filibuster and adopt their long-stalled economic measure using the process known as reconciliation.

Under the new plan, Democrats now seek to impose a new tax on the money that companies spend to purchase back their own stock, the two sources familiar with the matter said. Party lawmakers long have taken issue with such practices, arguing they benefit large firms’ stock prices at the expense of workers and the economy at large.

In adding the new tax, Democrats also appeared to rethink their initial plans to impose a minimum 15 percent tax on corporations. The exact details of the change is not clear, but Sinema said in a statement that her agreement would “protect advanced manufacturing.”

And Democrats removed their proposal to target the taxes that apply to private equity and hedge fund managers, an attempt to close what is known as the “carried interest loophole.”

Initially, the bill sought to change the way these investors are taxed on the fees their clients pay them, subjecting them to higher rates. But they scrapped their original plans in response to Sinema, who said she would work with Sen. Mark R. Warner (D-Va.) to address the issue while “protecting investments in America’s economy” and close “the most egregious loopholes that some abuse to avoid paying taxes.”