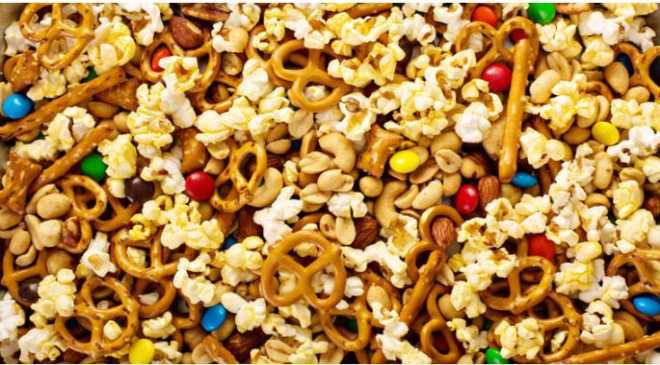 With a selection of snacks as vast as the one at Costco, it’s no surprise that supermarkets can’t keep a stock of all their delicious offerings at all times. This means you never know for sure how long that chip flavor you’ve been munching on for weeks will be available. Costco’s peanut butter chocolate snack mix, which happens to have a cult following of its own, has a similar reputation for making an appearance in stores at sporadic intervals.

Combining Reese’s Pieces, chocolate peanut butter cups, peanut butter-filled pretzels, peanut butter chips, dark chocolate chips, and actual peanuts in a truckload of peanutty goodness, the Hoody’s peanut butter chocolate trail mix has been flying off Costco’s shelves since as early as 2020 (via Instagram). After a reappearance in August again last year, fans are happy to report that the popular sweet and salty snack mix is back once more. An Instagram account dedicated to all things Costco, @costcobuys, recently spotted the familiar plastic tub for $8.99. If comments from psyched fans are any indication, the trail mix will quickly disappear from both warehouse shelves and customers’ homes.

Fans Have Jokes About This Binge-Worthy Snack

Despite being sold in a whopping 44-ounce jar that weighs more than 2.5 pounds, fans say that Costco’s peanut butter chocolate snack mix disappears way too quickly — into their tummies, of course (via @costcobuys). In fact, judging by the rate at which the snack gets eaten at their house, one shopper hilariously suspects that there may be some foul play at work: “Warning this stuff disappears…pretty sure someone breaks into my house in the middle of the night and stuffs handfuls in their face cuz there’s no way that was me.”

Plenty of other comments vouch for just how quickly the trail mix gets eaten, with some fans adding that it barely lasts them one night. One Costco shopper on Reddit admitted, “I can’t buy it. If I bring it into my house, it’ll be gone within 48 hours. I live alone.” Fans also humorously warn that the sweet, salty, and nutty mix is a dangerous combination — so addictive that one fan jokingly said it was “ruining” their life.

The one problem fans have with the peanut butter chocolate mix? Besides not being available at all Costco stores year-round, it’s too expensive, some fans say. “It disappears in one day so too expensive for me. I like to buy snacks that last a week,” said one shopper who’s not too pleased about the item’s $8.99 price tag.