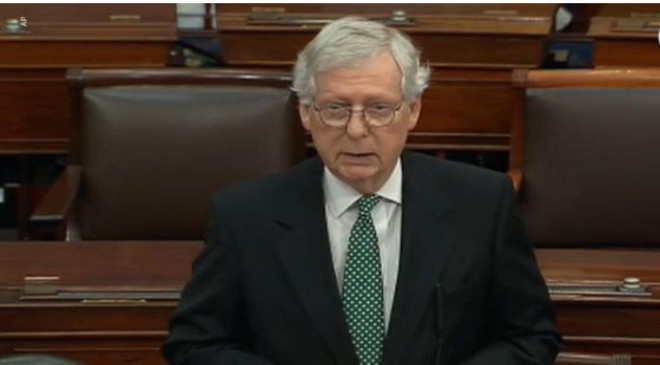 WASHINGTON – Key Senate Democrats have agreed on a deal they say would lower the cost of prescription drugs, bring down carbon emissions and chip away at the federal deficit.

In a major breakthrough, Senate Majority Leader Chuck Schumer and Sen. Joe Manchin, D-W.Va., announced Wednesday that they had reached agreement on a wide-ranging proposal that could salvage parts of President Joe Biden’s stalled domestic agenda. It was an unexpected turnabout after negotiations hit a setback earlier this month.

Manchin’s support was key given his steady opposition to large government spending bills and any energy proposals that would dramatically cut back on the fossil fuel industry crucial to his state’s economy.

Chief among its components is allowing Medicare to negotiate prescription drug prices – long opposed by the pharmaceutical industry – and investing in clean energy transmission that would help Biden’s goal of significant cabin carbon emissions reduction over the decade.

The measure is also projected to cut the deficit by approximately $300 billion over the next decade, in part by ramping up IRS enforcement and closing certain tax loopholes.

“This bill will cut the inflation taxes Americans are paying, lower the cost of health insurance and prescription drugs, and ensure our country invests in the energy security and climate change solutions we need to remain a global superpower through innovation rather than elimination,” Manchin said in a statement.

The Inflation Reduction Act of 2022 would:

The senators project the proposal would raise $739 billion in revenue over 10 years, with nearly half coming from a 15% corporate minimum tax. The measure is meant to close a loophole that has allowed large companies from avoiding paying income tax.

An additional $124 billion in revenue would be generated by ramping up enforcement by the Internal Revenue Service.

In a joint statement, Manchin and Schumer called the deal a “historic down payment on deficit reduction to fight inflation, invest in domestic energy production and manufacturing and reduce carbon emissions.”

The deal comes two weeks after Manchin appeared to crush Democrats’ hopes for a legislative package that went beyond prescription drugs and Affordable Care Act subsidies. Manchin previously said he wanted to wait until August, when July inflation figures are released, to decide what could be passed without further spiking consumer prices.

Biden praised the deal, calling it “historic” partly because it’s projected to lower health insurance costs for 13 million Americans, by an average of $800 a year, for families covered under the Affordable Care Act.

“This is the action the American people have been waiting for,” the president said in a statement Wednesday evening. “This addresses the problems of today – high health care costs and overall inflation – as well as investments in our energy security for the future.”

It’s unlikely to receive much – if any – GOP support, so Schumer said Democrats (who control only 50 seats) will try to pass the measure through a Senate rule that bypasses a potential 60-vote filibuster and requires only a simple majority to pass.

Biden took a back seat during talks, letting Schumer take the lead after the president’s negotiations for a trimmed-down $2.2 trillion Build Back Better bill was thwarted last year because of Manchin’s opposition.

The deal was announced only hours after the Senate approved a bipartisan bill designed to boost the computer-chip industry and high-tech research in the U.S.

Senate Minority Leader Mitch McConnell, R-Ky., had vowed to block the CHIPs bill if Democrats tried to ram through a separate tax and spending package.

Oklahoma GOP Rep. Kevin Hern urged his fellow Republicans to block the CHIPs bill “in light of this deal.”

“Whether Republican Members support CHIPS or not (I don’t), we must ALL vote no. Passing CHIPS will pave the way for the radical Build Back Broke plan,” he tweeted minutes after the Schumer-Manchin agreement was announced. “The time to fight is now.”

Advocates praised the deal even as many of its details were still not released.

“This is the best development on health care for the American people in years,” said Sara Lonardo, a spokesperson for the progressive group Families USA. “It promises lower drug costs and wider health care access.”

“The entire clean energy industry just breathed an enormous sigh of relief,” she said in a statement. “This is an 11th hour reprieve for climate action and clean energy jobs, and America’s biggest legislative moment for climate and energy policy.”