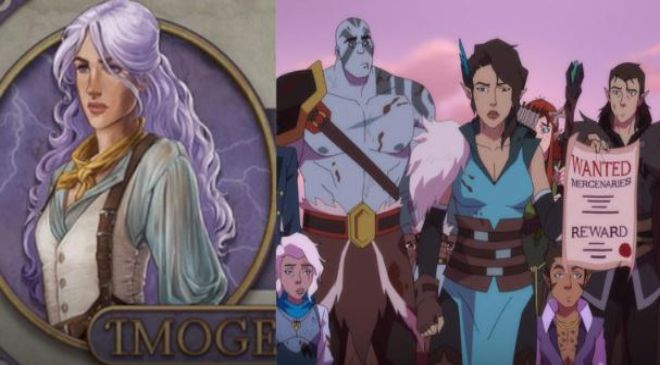 Critical Role took the Dungeons and Dragons hobby by storm with their popular Twitch stream and podcast. Recently, they even landed an Amazon Prime animated series following their first campaign’s story. The franchise has garnered fans from all walks of life, including those who don’t participate in the famous tabletop role-playing game.

Critical Role is successful partially because the cast and characters are so eccentric, memorable, and well-written, from the beloved Trickery Domain cleric, Jester Lavorre, to the hilarious automaton, Fresh Cut Grass. Each of these characters, with their strong personalities, corresponds to one of the twelve zodiac signs.

Beauregard Lionett and Chetney Pock o’ Pea are the Aires of Critical Role for their fiery tenacity and penchant for close combat. They are confident, though they may be hiding their inner turmoil, and they get things done. Furthermore, they both have a difficult time reconciling with their egos.

Aries, signified by the ram, is a cardinal fire sign, meaning it bears the raw, potential energy of the zodiac. Mars rules Aries, further emphasizing its assertive, passionate nature. Aries has dominion over the first house of personality, ego, and temperament. Beau and Chetney struggled with their selfish desires and becoming their genuine selves.

Taurus is the homebody sign. As the fixed earth sign, they are stubborn and don’t love change. They prefer tranquil spaces and comfort zones. However, they are steadfast friends and one of the most loyal, compassionate signs. Venus rules the bull’s sign, and as a result, they value their creature’s comforts.

Both barbarians (D&D’s strongest combat class), Yasha Nydoorin and Grog Strongjaw were the strong and reliable rocks on which the campaigns put their trust. Though Yasha had her secrets, she needed the Mighty Nein’s love and acceptance. Meanwhile, Grog found peace in his group’s tavern brawls and their keep’s rowdy halls.

Nott the Brave and Fearne Calloway were prone to thievery and lying (which made sense because Nott was D&D’s versatile rogue class), but they had empathy and wisdom when the situation called for it. They only had their parties’ best interests at heart. On top of that, they were both extroverted, multitalented characters with many hidden strengths.

For these reasons, they are the Gemini of their respective groups. Gemini is a Mercurial sign, meaning they have a knack for communication and are prone to whimsy. They are also a mutable air sign, meaning Gemini are liable to change directions at a moment’s notice, to which Nott and Fearne are both subjects. Finally, Gemini rules the third house of problem-solving and intellect. Fearne and Nott take unconventional approaches to overcoming obstacles.

The moon, which signifies emotions and the inner self, rules Cancer, the zodiac’s cardinal water sign. As a cardinal sign, the crab-inspired Cancer holds the pure force of emotions, feeling and understanding them in the rawest forms. Cancers are sometimes introverted, as symbolized in the crab’s shell imagery. As the ruler of the fourth house, Cancers are concerned about their families and birthplaces.

Keyleth and Caduceus Clay are kind characters who are quieter characters at first. They also have strong ties to their homes and families (Keyleth has a duty to the Air Ashari, and Caduceus is devoted to the Blooming Grove). Keyleth was a druid, one of D&D’s best utility classes, while Caduceus was a Grave Domain cleric, but both were invaluable help to their parties.

Leos are the charismatic characters of the zodiac, as represented by the confident lion. While they love to be center stage, they are not always entertainers (though often they are). The sun, which rules Leo, is the celestial body of the external self and presentation. Furthermore, Leo controls the fifth house of pleasure and creativity.

Vex’ahlia embodies Leo’s fiery, assertive side. Despite being a ranger (a beginner-friendly D&D class newcomers should try) with an archery focus, she is unafraid to take the helm and do the talking. Dorian, a bard, reflects Leo’s more creative and theatrical side.

Virgos are the zodiac’s mutable earth sign, meaning they are more flexible than Capricorn or Taurus. However, they are still stubborn at times. They value logic, organization, and structure. As the other Mercury-ruled sign, they are also intelligent and will speak their minds. Virgo encompasses the sixth house of service and community.

Orym is highly devoted to the Air Ashari and hesitates to break laws. He is staunch in his lawful good (one of D&D’s nine alignments) nature. Meanwhile, Imogen has a specific way of processing information and cares deeply about intellectual pursuits.

Libras are a Venus-based sign that values aesthetics and balance. Though they often go by the “people pleasers” of the zodiac, they are more concerned with fairness and avoiding conflict, as arguing disrupts the peace. Libra rules the seventh house of relationships and partnerships, as well.

Jester Lavorre and Fresh Cut Grass (both clerics and one of D&D’s best support classes) dealt with complicated relationships in their time. Jester was in love with Fjord Stone and took a while to come to terms with that fact. On the other hand, Fresh Cut Grass lost his deep connections with Dancer and the other automatons after they died. Above all, these characters are their groups’ light, hope, and innocence.

Scorpio is the dark and mysterious zodiac sign, and as a fixed water sign, its very nature seems counterintuitive. At different times in astrology’s practice, Mars (assertiveness and passion) and Pluto (transformation and the supernatural) ruled Scorpio. Furthermore, Scorpio’s domain is the eighth house of death, the occult, and taboos.

Vax’ildan and Laudna were entwined with death and the metaphysical. Vax was a rogue (arguably one of D&D’s best beginner classes) with ties to the Raven Queen, while someone raised Laudna from the dead. Still, they were emotionally perceptive, sought the truth, and were confident.

Sagittarius rules the ninth house of philosophy and higher education, but this mutable fire sign has a reputation for being the zodiac’s party animal. This assumption likely comes from its capricious temperament. Sagittariuses don’t like staying in one place and are often travelers, entertainers, or academics. Jupiter, the planet of expansion and luck, rules Sagittarius, so they are focused on new learning experiences.

Maullymock Tealeaf never stopped traveling and learning, especially after his first death. Meanwhile, Scanlan Shorthalt was the “life of the party” (who eventually had to learn to grow up). Many D&D bards ruin the party by focusing too much on seduction, and Scanlan was prone to that.

Capricorns are the cardinal earth sign, meaning they are grounded, realistic, and analytical. This is why they often go by the CEOs of the zodiac. They make plans, stick to them, and excel at playing the long game. Saturn, the planet of lessons and discipline, rules Capricorn. In addition, Capricorn resides in the tenth house of status and achievements.

Percival de Rolo lost his status as part of Whitestone’s ruling line when the Brairwoods killed his family, and from that moment on, Percy vowed to get revenge. He was one of the few who could stand up to the Briarwoods and even developed a special weapon to take them on.

Aquariuses are rebellious souls, as suggested by their Uranus rulership. On top of that, this fixed air sign rules the eleventh house of friendships. Aquariuses want to change the world and are great at building like-minded communities to achieve their visions.

Ashton Greymoore was the picture of rebellion with his punk rock aesthetic and “Just Don’t” shirt. Meanwhile, Pike Trickfoot wanted to revolutionize what it meant to be a cleric and help Vox Machina make an impression on the world.

Pisces is the zodiac’s mutable water sign, and their connection to Neptune and the twelfth house suggests their connection to dreams, higher powers, and the mystical. Pisces is sensitive and emotionally intelligent, though it’s not always forthright with those feelings.

Fjord Stone had the most iconic dreams of the Critical Role franchise, and his connection to Uk’otoa was the definition of the supernatural. On the other hand, Caleb Widowgast wrestled with his emotions as he experienced horrific traumas in his youth. Yet, he became one of the best wizards and overcame his past.