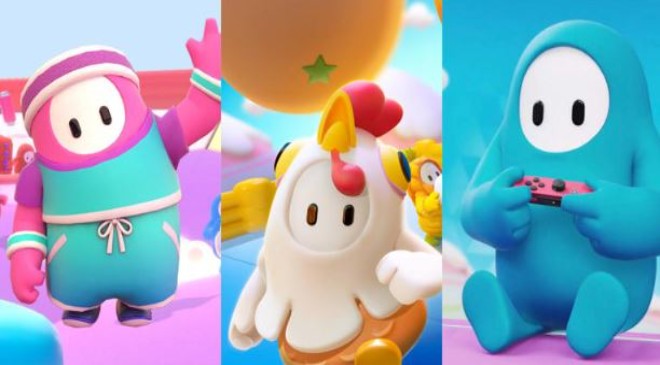 There are few games that bring the level of chaos that Fall Guys: Ultimate Knockout does each and every time you start up a match to earn those Kudos. You can have all the skill in the world at each of the unique games, but you still might end up getting knocked out in the first round if luck isn’t on your side.

Thanks to the chaotic nature of the game, there are plenty of people who have fallen in love with the wacky game modes that they find themselves in. You may be wondering which game mode you might be based on your personal zodiac, and the answer might be a bit of a shock. With tons of different modes as possibilities, only a few stand out to represent your zodiac.

Some say that the purpose of those born under the Aquarius sign is to change the world with their unique drive and charm, and boy, does Big Fans ever change the world of your Fall Guys game regardless of your character pattern.

Just like those under the Aquarius sign, Big Fans manages to forever impact many gamers, acting as a gatekeeper of sorts that is often either widely loved, but able to pick up just as many enemies. You can be tough to figure out, but once someone knows the trick, they’ll likely be counting on you to show up.

At a glance, connecting Pisces with Bubble Trouble seems like a huge misstep, but that couldn’t be further from the truth. Pisces are often considered to be masters of the world and the people around them, able to figure out the woes of anyone.

Bubble Trouble is a mode that requires players to have an almost psychic-like ability to foresee just where the bubbles will pop up next. The chaotic nature of the game matches with the constant drive for Pisces to explore every aspect of the world around them.

There is truly no better choice for an Aries than Door Dash. The entire game requires you to throw on your best costume and dive in head first and hope for the best with the decision you’ve made. The huge number of players often involved works perfectly with the competitive nature of an Aries.

You don’t need to wait around and let others figure out which door is the correct one, because you’re ready to forge your own path through the level in order to finish in the first place. Aries’ may like to put up walls, but the right person will always be able to knock them down.

It’s often said that a Taurus likes to take their time and enjoy the finer things in life. While no Fall Guys game allows you to take your time, the race of the Lost Temple serves as the perfect level for a Taurus. It doesn’t matter how fast you go, you’ll either find your path or you won’t.

The unique setting is the exact kind of place any Taurus would be happy to explore, after all, who doesn’t enjoy a few bouncy obstacles? The earthy, jungle-like nature of the game is sure to have every Taurus feeling right at home.

Those that find themselves curiously gawking at the world around them can often feel like they’re on a hoverboard drifting their way through life. This makes Hoverboard Heroes a perfect representation of Gemini.

The curious nature of a Gemini is something that needs to be kept in check or else they may find themselves blasted by a cannon, or ill-prepared for tricky obstacles. Still, it often feels like life continues to move regardless of the hardships that end up being faced by a Gemini.

Pretty much every Cancer who loves Fall Guys can probably already see the parallels with this mode. Their intuitive nature makes the survival game a perfect fit, since the key to success within a mode like Thin Ice is to trust your gut and do what you think will be best despite the other people around.

You’ll have to do everything you can to ensure you are protected from the dangers of other people, while also creating your own stronghold. Carving out your own space isn’t always a good thing, but a Cancer manages to make it work.

Few final rounds are as hilariously dramatic as Ball Blast, making it a perfect representation of Leos. The fierce and bombastic nature of the mode is something that will have Leos feeling right at home as they toss as many balls as they can at their enemies.

Sure, the world around them may begin to crumble, but they will continue doing what they do best with a smile on their face. A Leo may find themselves blasted across the stage, but that doesn’t mean their journey is over.

There are more than a few Fall Guys games that require the precise and analytical mind of a Virgo. The best possible mode for Virgos seems to be Lily Leapers, one of the trickiest and bounciest games on offer.

Each jump within the game has to be calculated perfectly in order to make the best use of your time. One small slip up and you’ll find yourself falling behind, but with the right plan in place, you’ll manage to catch back up in record time.

As the sign most often associated with balance, there couldn’t be a better mode for Libras than Full Tilt. The trick to the mode is to keep each obstacle as perfectly balanced as you can. While others will attempt to throw off that balance, Libra’s always find a way.

Part of understanding balance is understanding that imbalance is sometimes just as important. Utilizing the different levels of balance to succeed is one of the key things that all Libras must learn, and something that anyone wishing to thrive in Full Tilt must also learn.

A lot could be said about Scorpios, but one of the most important traits is their immense courage, something that is required if anyone hopes to thrive in Freezy Peak. Huge snowballs are around every corner ready to strike unprepared players.

To thrive, one must have the courage to press forward despite shocking hardships, and pick themselves back up when they’re struck down by even the biggest snowballs. Scorpios are practically masters of the Freezy Peak and the many tricks used to keep players down.

With Sagittarius often being tied to archery, it only makes sense that the most fitting game for them features cannons constantly firing objects. Being able to mix balance with the chaos around them, Sagittarius’ manage to handle their problems with ease.

Others may get in the way and wind up causing you to be swept up in hardship, but being able to hold on, catch your balance, and keep on dodging life’s obstacles is what Sagittarius’ are best at. Luckily, real life doesn’t tend to feature three canons shooting things at you.

Being able to make your way through treacherous terrains in the most efficient manner possible is a hallmark of Capricorns, making Treetop Tumble a perfect representation for them. You have many paths ahead of you, but the key to succeeding is using your time well.

Are you skilled enough to tackle the more difficult path, or will that ultimately end in failure? Is it best to take the longer route if you’ll succeed in the long run? These are questions a Capricorn doesn’t even need to ask, they simply know which route will end with their success.