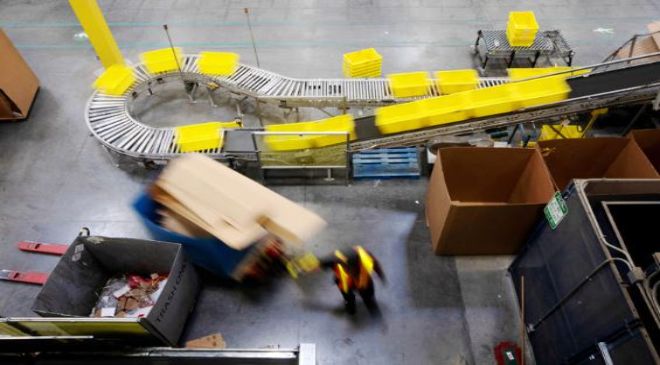 Some employees at the Amazon warehouse where a worker was transported to a hospital and died last week are voicing anger and frustration over the company’s response, calling on the e-commerce giant to release more information.

The fatality, which occurred on July 13 during the company’s Prime Day shopping rush at a Carteret, New Jersey, fulfillment center, has kicked off an investigation by federal regulators at the Occupational Safety and Health Administration.

On Friday, Amazon rejected as “rumors” the concerns raised by some staffers that the death was work-related, with spokesman Sam Stephenson telling NBC News in a statement that the incident “was related to a personal medical condition.”

Stephenson said Amazon had conducted an internal investigation during which a fellow employee said that the worker who died had reported experiencing chest pains the evening before his shift but didn’t alert colleagues or managers at the warehouse.

The comments come after more than a week of growing frustration among facility employees, some of whom have criticized the company’s response. Amazon said in the days after the fatality that it was “deeply saddened by the passing of one of our colleagues” and that it had contacted the worker’s family to offer support. It also said it was providing counseling resources to employees.

Amazon hasn’t released any additional information about its investigation into the incident, the worker or conditions at the warehouse at the time.

Days after the employee’s death, warehouse management posted a remembrance card, viewed by NBC News, on a company bulletin board and distributed it in an internal note to employees. Some workers said they were upset that the card contained little information about the employee, identifying him only by first name, or what led to his death.

“Remembering our Rafael,” it says, next to a photograph of the employee. The text on the card said that Rafael had worked at the facility, called EWR9, for only a few months. It said he was “very hard working” and “always looking to help out where needed.”

“We will remember Rafael and give our condolences to his family,” the card said, noting that a funeral would be held in the Dominican Republic.

Two EWR9 employees who spoke to NBC News said the area where the employee died was on an upper floor and known for particularly high temperatures within the warehouse. Both workers requested anonymity for fear of reprisal. Their deceased colleague had worked as a “waterspider,” one of the workers said, a job that involves carting goods around the facility.

The other worker said she had asked her managers about his death but wasn’t given more information. One manager told her not to talk about it, she said.

She said frustration at the warehouse has run high since the fatality.

“It’s scary,” she said. “We should know what happened and how did it happen. It could have been any of us.”

Amazon said Friday that it had conducted an internal investigation that ruled out working conditions as a culprit and disputed labor leaders’ account of the timeline.

“We’re thankful for the quick actions of our own teams and the first responders,” Amazon’s Stephenson said in the statement. “This has been a tragic situation for our employee’s family and for our colleagues at EWR9 who worked with him.”

On Thursday, Amazon Labor Union President Chris Smalls, who led a nearby Staten Island, New York, warehouse to a union victory this year, wrote on Twitter that the worker who died had been unconscious on the floor for more than 20 minutes and that it was nearly an hour before 911 was called. Smalls said the man was told to keep working after telling management he was experiencing chest pains.

Carteret recorded an outdoor high of about 92 degrees on July 13, according to AccuWeather, although the incident occurred in the morning.

Jon Salonis, a spokesman for the borough of Carteret, said that an emergency call first came in from the facility at about 8 a.m. and that the worker was subsequently transported to a nearby hospital.

Separately on Monday, officials from OSHA, the Labor Department’s workplace-safety arm, inspected Amazon warehouses in New York City, Orlando and Chicago in response to referrals from the U.S. Attorney’s Office in Manhattan.

Amazon said that it would “of course cooperate with OSHA in their investigation, and we believe it will ultimately show that these concerns are unfounded.”