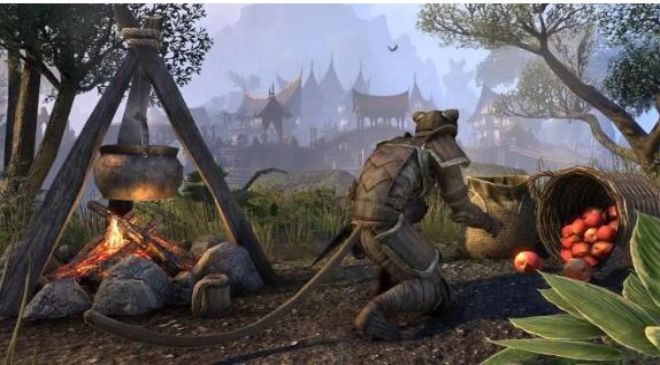 The Elder Scrolls Online isn’t the newest MMORPG on the block, but it’s among the most exciting games to be playing in 2022. Not only has it grown exponentially since launching in 2014, but this year saw the arrival of High Isle — the sixth Chapter in the ESO saga that brought players to a region previously unexplored across the entire Elder Scrolls franchise.

Despite its age and the dozens of high-profile titles launching this year, ESO is still worth playing in 2022. Whether you’re looking for your next competitive fix or a relaxing way to unwind after a busy day, ESO offers a wealth of content for players of all types. It’s also surprisingly respectful of your time — something MMOs typically struggle with — making it stand out in the crowded MMO market.

The Elder Scrolls Online is an MMORPG first released by ZeniMax Online Studios in 2014. It lets you explore a large portion of Tamriel (including several familiar locations from throughout the series’ history) while diving into dungeons, taking part in large-scale PvP, or relaxing with a bunch of component gathering or gear crafting.

In true MMO fashion, there are thousands of ways to spend your time in ESO and millions of ways to create your perfect character. You can play as an Argonian Necromancer, slinking through the shadows and pickpocketing unsuspecting NPCs. You can become a powerful High Elf Sorcerer and climb through the ranks of the Mages Guild. Or you can do something off-kilter and build an Orc Nightblade that runs around with a Destruction Staff and picks flowers for Alchemy — whatever you envision, ESO gives you the freedom to make it a reality.

Whether you take these characters on a solo adventure, team up for PvP, or build out a team for high-level PvE, The Elder Scrolls Online offers just about everything you’ve come to expect from a modern MMO. In other words, it’s a multiplayer version of Skyrim with some MMO-stylings thrown in for good measure.

One of the main reasons ESO continues to be so popular after six years is due to its unique chapter system. These yearly expansions don’t require you to be max-level to enjoy their content — meaning anyone who purchases them gains instant access to dozens of hours of fresh content. Of course, some of the content is typically intended for high-level characters — such as Trials, which are the most difficult form of PvE — but you won’t need to run around killing boars to power-level your character ahead of a new expansion.

This sense of freedom was enabled by the One Tamriel update several years ago, which scales characters’ abilities and lets you tackle any quest or jump into any region whenever you’d like. Much like Skyrim, you’re free to travel wherever your heart desires in ESO. That’s not to say progression doesn’t feel rewarding — earning new gear and learning new skills will still make you more powerful — but it’s great to see an MMO that’s so friendly to casual players.

Because of the lack of level-gating, the amount of content readily available to newcomers can be overwhelming. Here’s a quick look at some of the content that’s dropped in ESO since launch:

From that short list, it should be abundantly clear that the world of ESO is still alive and well. A massive next-gen update only made the game more popular, and the ability to dive into any new content without much grinding means it’ll continue to grow in the coming years.

You can also become a premium ESO Plus member to gain access to all this content — minus High Isle — without making a stand-alone purchase. Joining the premium service isn’t mandatory, but it does come with a few in-game perks that make things a bit more convenient for dedicated players.

Blackwood made ESO easier for newcomers

The Elder Scrolls Online introduced the Blackwood Chapter in 2021, and it brought some radical changes to the gameplay. Not only did it introduce a new region and questline, but it also brought a Companion System to the game. This allows you to travel the world with an NPC follower by your side that will help during combat. They’ll also react to your in-game behavior. Perform actions they’re against, and they’ll slowly come to dislike you. Stay in their favor, however, and you’ll earn unique dialogue options and other in-game bonuses.

Longtime fans of The Elder Scrolls will love the Blackwood Chapter because of its marshy setting and the return of Leyawiin — a popular location from The Elder Scrolls III: Oblivion. The town has been faithfully recreated, although it’s a bit more populated than you’ll remember — ESO is set in a different time period than the original Oblivion, and some creative liberties were taken to pull the town into the 21st century.

New players to ESO will also benefit from a reworked tutorial segment that accelerates the learning curve and throws you into the action faster than before. Expect to be running around doing whatever you’d like in less than an hour — although we recommend you dive head first into the main quest before heading out on your own.

One thing that hasn’t changed much since launch, however, is the combat system. Reworks and small tweaks have been made over the past few years, but many players in the community still think the action feels “floaty” and lacks impact. Combat may not be as visceral as it is in other games, but it still requires plenty of skill and careful planning to be successful — Blackwood made big strides for ESO in 2021 but didn’t do much to address these long-running combat concerns.

If you’re playing ESO in 2022, you’ll want to dive into the latest expansion, High Isle. This brings fans to the home of the Bretons — a previously unexplored portion of Tamriel. Dense jungles and sprawling forests make up the archipelago, along with a few high-fantasy-inspired settlements. It’s unlike anything you’ve previously seen in the game, and it’s clear the dev team still has some fascinating material to work with (despite ESO‘s already-massive map).

Aside from a change of scenery, High Isle made a few big changes to ESO. The first is the addition of Tales of Tribute, a card game that lets you compete with other players or NPCs for a variety of rewards. Learning how to play Tales of Tribute is simple (thanks to basic rules and a serviceable tutorial) but there’s a high skill ceiling for those seeking a challenge.

Like all Chapters, this one brought a new questline, new characters, new PvE content, new world events, and plenty of smaller changes to ESO. There’s nothing quite as game-changing as Companions, but it’s great to see that ZeniMax is still committed to high-quality, yearly updates.

However, many fans are starting to see a disconcerting pattern with these big updates. While they no doubt introduce some great content, they all stick to the same basic formula — that is, unlock a new region, offer a new questline, and mix in a few extras for variety. It’s not a bad thing for newcomers, but veterans might feel as if they’re running through the same content but with a new color palette.

The Elder Scrolls Online has all the trappings of a modern MMORPG, but what exactly does that look like? If you’re curious to know how you’ll be spending the majority of your time in Tamriel throughout 2022, here’s what you can look forward to:

There are several forms of PvP in Elder Scrolls Online, but Battlegrounds and Cyrodiil are the two main attractions. Battlegrounds pits three teams of four against each other in a variety of game modes — including variants of Capture the Flag, King of the Hill, and Deathmatch.

Cyrodiil, meanwhile, is a large-scale conflict that sees hundreds of players assaulting castles, setting down siege equipment, repairing damaged structures, and slowly taking over the map. It’s an incredibly fun experience that’s only become better with age, although you may want to wait until you’re at a higher level to join in on the action. At the very least, you should have a few veteran players by your side — otherwise, it’s easy to get knocked out by a single high-level opponent.

Cooperative play is a huge part of ESO, and both Dungeons and Trials have continued to grow since launch. Dungeons are instanced locations that see a party of four tackling a set mission and facing off against deadly bosses along the way. Trials offer much the same — but are much more challenging, feature more complex mechanics, and allow for groups of up to 12. New Dungeons and Trials have been added every year since launch — and it’s a pattern that doesn’t seem to be slowing down any time soon.

Beyond instanced content, you’ll also find a variety of cooperative content scattered throughout Tamriel. Whether you’re cutting down difficult World Bosses, questing as a party, or waiting for a Dark Anchor to drop and enemies to come flooding out of Coldharbour, there’s no shortage of cooperative content in ESO.

Like most aspects of ESO, crafting isn’t a required part of the game. However, if you skip out on it, you’re going to be missing out on powerful gear and tons of gold. Crafting is simple to learn, although the recently introduced Jewelry Crafting profession keeps things interesting for veteran players. If you’re just learning the ropes in 2022, you’ll be glad to know that a robust tutorial system makes it a fairly painless process.

Whether you’re running around gathering components, deconstructing unwanted gear for parts, or researching valuable Traits, crafting in ESO provides a constant sense of progression and is an invaluable part of the game in its current state. Just venture into any city, and you’ll see dozens of players bustling around the crafting stations before heading back into a Dungeon or Battleground.

How does it stack up to other MMORPGs?

Diving into an MMO is a huge time commitment. With plenty of other great titles on the market, you’ll want to make sure you’re picking the right one for your playstyle — juggling more than one MMO isn’t an easy task.

For the most part, anyone playing The Elder Scrolls Online in 2022 should find something they enjoy about it. Huge strides have been made by ZeniMax over the past few years to craft an engaging world, but it’s certainly not an MMO for everyone. Here’s how ESO stacks up to the competition and why you might prefer it over the competition:

2022 is a great time to start playing ESO

The Elder Scrolls Online is putting out some of its best content in 2022. High Isle didn’t rock the boat too much, but what it offered was of high quality. Tales of Tribute is also proof that the team isn’t afraid to innovate — although it’d be great to see next year’s Chapter make some big changes to the standard update formula. However, players checking out ESO for the first time in 2022 will find hundreds of hours of content to explore, including solo, cooperative, and competitive endeavors. This year has been great for ESO, and it’s the perfect time to jump into the action and see what all the fuss is about.