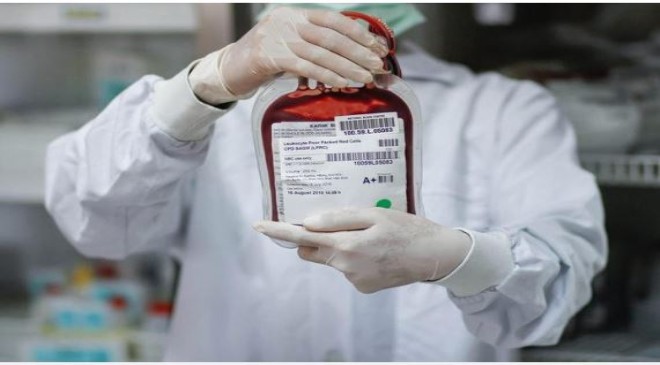 Your blood type matters
Unless you’ve recently given blood, you may not think much about your blood type. The presence or absence of certain molecules called A or B antigens, as well as a protein called the Rh factor, determine which of the eight common blood types you have coursing through your veins. (The American Red Cross notes that these blood types are: A+, A-, B+, B-, AB+, AB-, O+, or O-.) However, these antigens make a difference beyond just your blood, according to an article published in Blood Transfusion in 2013. They can influence other parts of your body, including blood vessels, neurons, and platelets, and as a result, your blood type may be linked to your risk of developing certain diseases. Here’s why you should know what blood type you have.

Types A, B, AB: Heart disease

Non-O blood types have 25 to 30 percent higher levels of blood-clotting proteins known as von Willebrand factor and factor VIII. In part, because of that difference, these folks also have a 15 percent greater risk of dying from heart disease compared to people with other blood types, according to 2015 research from BMC Medicine. Learn the 9 things you need to know about heart attacks before you have one.

Considering that type Os have lower quantities of the proteins that help blood coagulate, they’re also less likely to suffer from blood clots. (The downside is that blood clotting helps prevent excessive bleeding.) That said, there are many things that cause blood clots. “It shouldn’t be assumed that being an O blood type means an individual is ‘protected’ or an A blood type is at higher risk,” says Terry B. Gernsheimer, MD, a hematologist and the director of the UW Medical Transfusion Service at Seattle Cancer Care Alliance in Washington. Here are the blood-clot symptoms you shouldn’t ignore.

Type O may be the most common blood type—and it may interfere with pregnancy. As research published in the journal Human Reproduction notes, O types were twice as likely to have levels of follicle-stimulating hormone (FSH); the levels were high enough to indicate low ovarian reserve—fewer egg cells for fertilization. Another study published in the Journal of Assisted Reproduction and Genetics found that women with both O and A blood types were less likely to experience successful IVF (i.e., resulting in a live birth) than those with type B, whose odds were higher. These are the signs of infertility every couple should know about.

Another interesting finding from the BMC Medicine study that linked certain blood types to a higher risk of heart disease: Non-O blood types (A, B, or AB) also had an increased risk of gastric cancers, possibly due to an inflammatory response to H. pylori bacteria. (The bacteria are a cause of gastric ulcers.) Here are 10 signs of an ulcer you should never ignore.

Because of differences in clotting, A/B blood types are more likely to suffer from venous thromboembolism—a clot that forms in the deep veins of the leg, groin, or arm (deep vein thrombosis, or DVT), and can break off travel to the lungs (pulmonary embolism)—compared to O types, according to research published in the journal Blood Transfusion. The study additionally found that non-O types with inherited thrombophilia, a condition in which blood coagulates abnormally, raised their risk threefold. Don’t miss these silent signs of deep vein thrombosis.

Though AB is the least common blood type, research published in the journal Neurology in 2014 suggests that people with AB are 82 percent more likely that people with other blood types to develop cognitive issues that could lead to dementia later in life. The study’s authors theorize that this may be because AB blood has higher levels of factor VIII. Don’t miss the signs you could have early-onset Alzheimer’s.

Type A or B: Diabetes

People with a blood type of A or B have an up to 21 percent greater risk of developing type 2 diabetes compared to those with type O, according to a study published in the journal Diabetologia. (Those who were B positive had the highest odds.) While researchers note that it’s not exactly known why, one thought is that the blood type may influence the GI microbiome, which can affect glucose metabolism and inflammation. Don’t miss these 23 surprising habits that can lead to diabetes.

It can’t tell you about your perfect diet

You may have heard people talk about the blood-type diet, in which eating and avoiding certain foods based on your blood type can boost your health and lower your risk of disease. However, a 2013 review in the American Journal of Clinical Nutrition concluded that there’s no evidence that proves these types of diets actually work. Another study published in PLOS ONE found that while following a diet like this may have a positive effect on some cardiometabolic risk factors, it has nothing to do with someone’s specific blood type.

It probably won’t tell you anything about your personality

There’s a theory that your blood type can explain why you act the way you do. While that largely hasn’t been proven, one Japanese study published in PLOS ONE found that some personality traits differed between blood groups. People with type A, for instance, scored higher on persistence compared to types B or O. However, even the researchers note that there aren’t enough data to prove the connection. Until we know more, it looks like you can’t use your blood type as a scapegoat for your behavior. Learn more about your personality type here.

What to know about blood-type research

Keep in mind that the research linking blood type and health conditions looks at population studies, so it can only find an association between these two things, not definitively prove that your blood type is the cause of a specific condition. “The risk for any one person is multifactorial,” notes Dr. Gernsheimer. That means your daily habits—what you eat, your activity level, how you handle stress, and your family history—make a huge difference in your individual risk.

Your blood type certainly doesn’t seal your fate when it comes to your health. “It’s important to understand that blood groups also vary in different ethnicities and within ethnic groups depending on where they settled during migrations,” says Dr. Gernsheimer. “These differences in cultures may lead to differences in diet and lifestyle that further affect risk.” Plus, even though there are many ways your blood type may influence your health, Dr. Gernsheimer says that “there isn’t good evidence that one’s lifestyle should be altered because of it.” Next, check out these obscure facts you never knew about your own body.