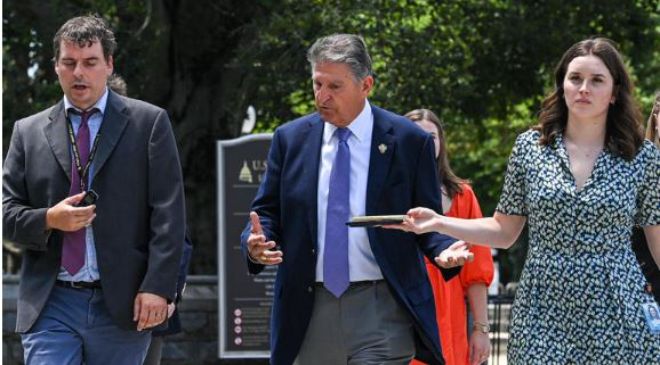 WASHINGTON — Senator Joe Manchin III, Democrat of West Virginia, pulled the plug on Thursday on negotiations to salvage key pieces of President Biden’s agenda, informing his party’s leaders that he would not support funding for climate or energy programs or raising taxes on wealthy Americans and corporations.

The decision by Mr. Manchin, a conservative-leaning Democrat whose opposition has effectively stalled Mr. Biden’s economic package in the evenly divided Senate, dealt a devastating blow to his party’s efforts to enact a broad social safety net, climate and tax package.

In recent months, Democrats had slashed their ambitions for such a plan to win over Mr. Manchin, hoping that he would agree to support even a fraction of the sweeping initiative they once envisioned. His abrupt shift appeared to dash those aspirations.

In a meeting on Thursday with Senator Chuck Schumer of New York, the majority leader, Mr. Manchin said he would support a package that would include a negotiated plan aimed at lowering the cost of prescription drugs and an extension of expanded Affordable Care Act subsidies set to lapse at the end of the year.

The shift capped off weeks of painstaking negotiations to cobble together a package that could win Mr. Manchin’s support. It came seven months after the West Virginian abruptly walked away from talks and rejected a far larger plan.

“Political headlines are of no value to the millions of Americans struggling to afford groceries and gas as inflation soars to 9.1 percent,” said Sam Runyon, a spokeswoman for Mr. Manchin. “Senator Manchin believes it’s time for leaders to put political agendas aside, re-evaluate and adjust to the economic realities the country faces to avoid taking steps that add fuel to the inflation fire.”

“Senator Manchin has not walked away from the table,” she added.

As of Thursday morning, Democrats had remained cautiously optimistic that a deal could be reached, provided that they followed Mr. Manchin’s repeated calls to address the national debt, tax reform and drug prices.

The Washington Post earlier reported details of the conversation, which were confirmed by two people briefed on the discussion.

Because Democrats hold the Senate by a bare 50-50 majority, Mr. Manchin has been able to effectively exercise veto power over the domestic policy package, which the party had planned to move under a special fast-track budget process that would allow it to bypass a filibuster and pass with a simple majority. With Democrats bracing for losses in midterm elections this fall, the package could be the party’s last chance to enact substantial spending and tax legislation while it still holds the White House and both houses of Congress.

In rejecting any climate and energy provisions, Mr. Manchin appeared to have single-handedly shattered Mr. Biden’s ambitious climate agenda and what would have been the largest single federal investment in American history toward addressing the toll of climate change.

His decision came just days after a report showed that prices surged to 9.1 percent in June, exacerbating existing fears about inflation and rising costs for every day Americans. But while Mr. Manchin has long sounded alarms about inflation and the national debt, he had also maintained openness to overhauling the tax code, a position he appeared to have reversed.

It stunned Democratic officials who had labored to win Mr. Manchin’s vote. As recently as Friday, Democrats said they had coalesced around a plan to use the funds from raising taxes on some high-earning Americans to extend the solvency of a key Medicare fund.

But it was particularly devastating for those who had championed the climate and energy provisions. In calls to various climate activists on Thursday night, Mr. Schumer and his staff sounded shellshocked and said they believed until just a few hours before that a deal was still possible, said one person who spoke with Mr. Schumer.

Without action by Congress, it will be impossible to meet Mr. Biden’s goal of cutting U.S. emissions roughly in half by the end of this decade. That target was aimed at keeping the planet to stabilize the climate at about 1.5 degrees Celsius of warming compared to preindustrial levels.

The Earth has already warmed by about 1.1 degrees Celsius, or about 2 degrees Fahrenheit. Lawmakers and activists who have led the charge for action to combat climate change expressed outrage on Thursday night.

“I’m not going to sugarcoat my disappointment here, especially since nearly all issues in the climate and energy space had been resolved,” said Senator Ron Wyden, an Oregon Democrat and the chairman of the Senate Finance Committee. “This is our last chance to prevent the most catastrophic — and costly — effects of climate change. We can’t come back in another decade and forestall hundreds of billions — if not trillions — in economic damage and undo the inevitable human toll.”

“If we can’t move forward as we had hoped, we need to salvage as much of this package as possible,” he added. “The expression that failure is not an option is overused, but failure really is not an option here.”

Leah Stokes, a professor of environmental policy at the University of California Santa Barbara who has advised congressional Democrats on climate legislation, sobbed on Thursday night as she described the months of work she and other activists, scientists and legislative staff had poured into negotiations.

“The stakes are so high,” she said. “It’s just infuriating that he is condemning our own children.”

Many were seething with anger at Mr. Manchin. They criticized him as having strung negotiators along, while watering down a package that at one stage would have been sufficient to put a steep dent in emissions and also adding fossil fuel projects that cut against climate goals. In the final days of talks, the clean energy tax breaks had been slashed and Mr. Manchin had been working to include approval for offshore oil and gas leasing and permitting for a fossil fuel project in his state, congressional aides said.

“There truly aren’t words, at least words that are suitable for printing in The New York Times, for how appalled and outraged we are,” she said.