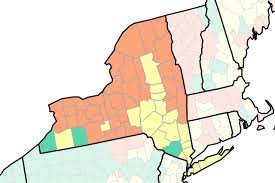 Nestled between the Hudson River and the western edge of Connecticut sits Dutchess County, a political battleground whose changing district lines hold huge stakes in Washington, D.C. Locally, Republicans have dominated county elections, holding a 17-8 majority in the Legislature and electing only one Democratic county executive in history.

Federally, it’s been a different story, with Democrats winning majorities in all but one congressional and presidential race over the past seven years. Traditionally, the county’s voters were split between two congressional seats, holding diminished sway in the 18th and 19th Districts. Now, after a chaotic redistricting process, nearly all of its roughly 300,000 residents are consolidated into the 18th District.

But when new lines were drawn, one notable figure got left out: Democratic Rep. Sean Patrick Maloney. The congressman has kept the 18th District comfortably blue for nearly a decade, but this year he’ll seek reelection in the 17th District. The move could harm Democrats, some say, with the party losing a candidate whom even Republicans concede was well-liked.

The leading candidates running for the 18th District seat are new to Dutchess: Ulster County Executive Pat Ryan, a Democrat, and State Assemblymember Colin Schmitt, a Republican who represents parts of Orange and Rockland counties. Neither have held office in Dutchess, and the local vote could come down to whose name and record better resonate with the purple county, where voters are anxious about surging gun violence in the county seat of Poughkeepsie, a lack of broadband internet access in rural areas and the impacts of climate change on a region whose economy is bolstered by tourists drawn to its natural beauty. And on everyone’s mind: inflation and soaring gas prices.

With Ryan likely to find support in Ulster and Schmitt favored in Orange, a better pitch in Dutchess may be the winning formula.

“Dutchess County is 100 percent going to determine the outcome of this race,” said County Legislature Majority Leader Will Truitt. “I truly believe that.”