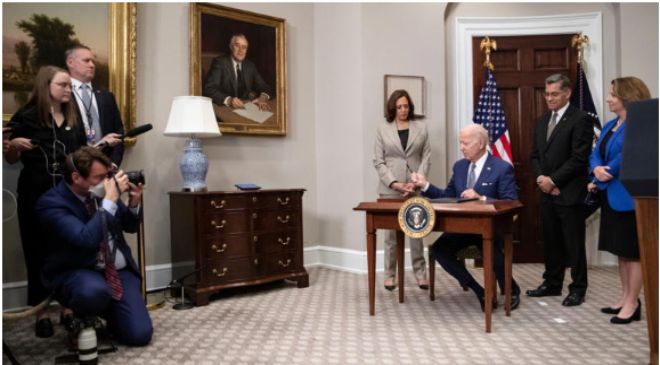 WASHINGTON — Under pressure to do more to respond to the Supreme Court’s decision to overturn Roe v. Wade, President Biden on Friday issued an executive order that aimed to ensure access to abortion medication and emergency contraception while preparing for legal fights to come.

But the order is vague about how the president hopes to accomplish those goals, leaving the details largely to Xavier Becerra, his secretary of health and human services, who has said the administration has “no magic bullet” that can restore access to abortion.

And Mr. Biden’s order stops far short of demands from abortion rights advocates, who have criticized him for failing to move quickly to take action after the court’s decision two weeks ago.

Speaking to reporters at the White House before signing the document, Mr. Biden condemned the court’s decision as “terrible, extreme and, I think, so totally wrongheaded.” The order would help protect some access to reproductive services, he said, but the only real way to protect access was to elect more lawmakers who support them.

“For God’s sake, there’s an election in November. Vote. Vote. Vote. Vote,” the president said, noting that the justices in the majority “practically dares” women to assert their political power to put in place laws that restore abortion rights. “Consider the challenge accepted, court. But in the meantime, I’m signing this important executive order.

The order directs Mr. Becerra to develp a report “identifying potential actions” to protect access to abortion, but does not say what those actions will be. Mr. Becerra will identify “steps” to ensure that pregnant women have access to emergency care, it says, by “considering updates to current guidance on obligations specific to emergency conditions and stabilizing care.”

The order does not specify what those updates will be but directs Mr. Becerra to report back to Mr. Biden in 30 days.

In an effort to prepare for legal challenges from abortion opponents, the order directs the attorney general and the White House counsel to “convene a meeting of private pro bono attorneys, bar associations, and public interest organizations” to encourage robust legal representation.

In response to concerns that those seeking abortions could be prosecuted using personal information in emails, texts or web searches, the order seeks to safeguard patient privacy regarding data about women’s health services.

The order pledges that the administration will “ensure the safety of patients, providers and third parties” who are delivering or receiving abortion services. But it does not say how agencies will ensure that amid heightened tensions after the Supreme Court’s decision.

Mr. Biden has repeatedly said that he does not have the authority to restore the constitutional right to abortion that the court ended when it overturned Roe. In the hours after the ruling, the president said he was powerless to restore the status quo.

“The only way we can secure a woman’s right to choose and the balance that existed is for Congress to restore the protections of Roe v. Wade as federal law,” Mr. Biden said. “No executive action from the president can do that.”

Other administration officials have also said that the president’s hands are largely tied in part because of the Hyde Amendment, a provision in federal law precluding the government from paying for abortions except in cases of rape or incest or to save the life of the mother.

Mr. Becerra has said his agency will work with the Justice Department to ensure that women have access to abortion pills — two drugs taken 24 to 28 hours apart and authorized for use during the first weeks of pregnancy — in places where state law conflicts with the judgment of the Food and Drug Administration, which approved the drugs for use and determined that they are safe and effective.

Beyond that, Mr. Biden and Mr. Becerra have said that Americans should vote for lawmakers who support abortion rights so that Congress can take action to establish federal protections for access.

But the attempt to shift responsibility has not gone over well among some of Mr. Biden’s core supporters, who have repeatedly called on the White House to push to find novel ways around the court’s decision and the subsequent limits on abortion that the ruling automatically imposed in more than a dozen states with Republican-led state legislatures and Republican governors.

Some activists and lawmakers, for example, have urged the president to establish abortion services on federal land or on Native American territories, where state laws banning abortion services might not be enforceable. The White House has dismissed those ideas as legally unworkable and potentially more dangerous for women seeking abortions.

On Thursday, a reporter asked Karine Jean-Pierre, the White House press secretary, whether the president was examining the possibility that the Department of Veterans Affairs could offer abortion services at V.A. hospitals.

Opponents of abortion rights criticized the president’s order on Friday.

Jeanne F. Mancini, the president of March for Life, called it “tragic that this administration is using its power to push for more and more painful abortions which harm women and take innocent lives.” She added: “Our nation today faces significant challenges; not enough abortion is not one of them.”

Some abortion rights advocates praised the president for signing the order.

Mini Timmaraju, the president of NARAL Pro-Choice America, said in a statement that “President Biden’s executive order to safeguard access to reproductive health care, including abortion care, is an important first step in restoring the rights taken from millions of Americans by the Supreme Court.”

But other advocates have urged Mr. Biden to step in and take bolder action, even if he risks being overturned in court. They want him to declare a public health emergency, a move that they say would enable the administration to move quickly to expand access to abortion, including by ensuring that abortion pills can be prescribed in states where abortion is illegal.

“You need to be willing to take some risks — even if the anticipation is it might not work,” said Andrea Miller, the president of the National Institute for Reproductive Health, an advocacy organization. “Because we are facing an immediate crisis.”

Until Friday, officials had been coy about how far Mr. Biden was willing to go. Asked on Thursday about a possible executive order related to abortion, Ms. Jean-Pierre declined to answer the question, saying she would not “get ahead of the president.”

Mr. Biden signed the executive order on Friday before leaving for a weekend at his beach house in Delaware. The fact sheet did not include any of the more far-reaching suggestions about using federal resources to provide abortion services.