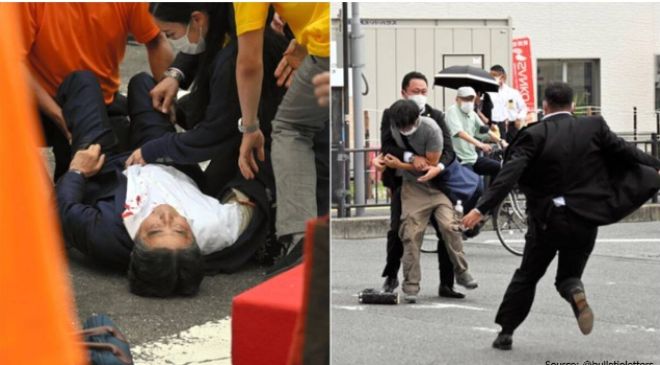 Japan’s longest-serving Prime Minister Shinzo Abe was assassinated by a gunman during a campaign speech Friday in Nara, Japan.

Abe was in the middle of a speech on the street when he was shot. Witnesses heard two loud bangs accompanied by smoke, causing confusion at the scene. Abe reportedly suffered bullet wounds. local reports say.

Police arrested a 41-year old local man on charges of attempted murder and confiscated a homemade gun. The shooter dressed in a gray shirt and khaki pants, has been identified as Tetsuya Yamagami, 41, and he had worked for the Maritime Self Defense Force for three years until around 2005, according to Defense sources.

There is currently no known motive over the attack but the shooter allegedly had “no grudge against Abe’s political beliefs,” according to Japanese police.

Gun violence in Japan is very rare because the country has one of the strictest gun control laws in the world. No handguns are allowed but hunters are licensed to own shotguns and air rifles after training and background checks.

Abe was in the western city of Nara stumping for his party’s candidates in the upcoming upper house election when the shooting occurred. Despite no longer being Japan’s prime minister, Abe remained influentiual on national security and economic policies, and as a central figure within the ruling Liberal Democratic Party.

Known to be a hard-line conservative inside his party, Abe served as chief cabinet secretary from 2005 to 2006 under Junichiro Koizumi. He was then elected president of the Liberal Democratic Party and became Japan’s prime minister in 2006 at the age of 52 — the country’s youngest prime minister since World War II.

He served from 2006 to 2007 and then again from 2012 to 2020, before stepping down due to chronic health issues. He later revealed he was being treated for ulcerative colitis, a chronic intestinal disease.

His visit to the controversial Yasukuni Shrine to honor World War II criminals as well as laws passed during his time in office allowing Japan’s Self-Defense Forces to participate in wars alongside allies overseas had strained relationships with neighboring countries. Abe was also a strong vocal critic of Beijing as he sided with Taiwan’s desire to be recognized as a democratic independent state.

Abe was the first foreign leader to meet former President Donald Trump after Trump was elected in 2016. Trump called Abe “the greatest prime minister in Japan’s history” and the two leaders held a total of 14 official meetings. They were also known to have been “golf buddies” playing together five times during Abe’s second term as prime minister.

During his tenure, Abe pursued aggressive economic policies, dubbed “Abenomics” to bolster Japanese economic growth which had become stagnant after two decades of sustained success. His so-called three arrows strategy was characterized by monetary easing from the Bank of Japan, government spending and economic structural reforms. Abe’s policy reforms reduced real interest rates and generated inflationary expectations in the market but, overall, there are debates in Japan as to whether “Abenomics” was ultimately effective.

Abe was born to a politically powerful household. His maternal grandfather Nobusuke Kishi helped found the governing conservative Liberal Democratic Party in 1955 and led Japan from 1957 to 1960. His father, Shintaro Abe, was also a leading member of the LDP and was Japan’s foreign minister from 1982 to 1986.

Plans for Abe’s funeral have not yet been announced.