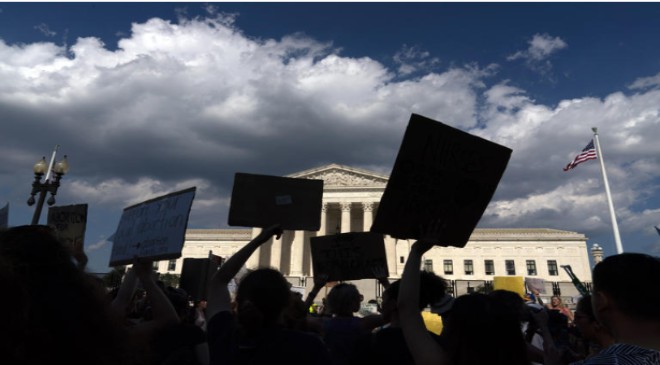 They call her, desperate, scared and often broke. Some are rape and domestic violence victims. Others are new mothers, still breastfeeding infants. Another pregnancy so soon, they say, is something they just can’t handle.

“Heart wrenching,” said Angela Huntington, an abortion navigator for Planned Parenthood in Missouri, who is helping callers reschedule canceled abortion appointments — sometimes hundreds of miles away from their homes — after the fall of Roe v. Wade.

The ruling has set off a travel scramble across the country, with a growing number of states mostly banning the procedure. Clinics operators are moving, doctors are counseling crying patients, donations are pouring into nonprofits and one group is dispatching vans to administer abortion pills. Some cities — like Kansas City and St. Louis — also are drafting plans to help with the travel logistics.

Huntington has been preparing for this moment for months. Even before the U.S. Supreme Court’s decision last week to end constitutional protection for abortion, the procedure had become difficult to nearly impossible to obtain in states including Texas, Oklahoma and Missouri.

“Basically,” she said, they were “living in a post Roe era.”

Now a fresh round of laws are taking effect. Staff at a clinic in Nashville were flooded with calls from patients trying to understand the new legal landscape, after a federal court on Tuesday allowed the state’s ban on abortion as early as six weeks into pregnancy to take effect.

In Arkansas, some patients already were headed to a Planned Parenthood clinic in Little Rock to obtain medication-induced abortions when the decision came down last week. Upon arriving, they were sent home.

Huntington and others try to help move their appointments to clinics in Kansas, Illinois and even Colorado. If a patient is broke but has access to a reliable car, Huntington can offer gas cards. She works with nonprofits to arrange commercial flights and lodging. In recent weeks, she said, a group called Elevated Access has enlisted volunteer light aircraft pilots to transport patients to abortion appointments, sometimes departing from small rural airstrips.

“It’s been hell,’’ said Dr. Jeanne Corwin, a gynecologist who works at a clinic in Dayton, Ohio, where most patients are being turned away after new state rules took effect banning abortions after a heartbeat can be detected. Many are being sent over the border to Indiana and the clinic’s sister site in Indianapolis, where Corwin also works.

She said they are desperate, including a patient in her 30s, recently diagnosed with advanced melanoma and in her first trimester.

“She has to end her pregnancy’’ so she can begin chemotherapy, and is going to Indiana, Corwin said, adding that patients who are beyond Indiana’s 14-week cutoff are being sent to Illinois or Michigan.

Time also may be short for women diverted to Indiana because lawmakers there are expected to re-consider the state’s abortion laws at a special session starting July 6.

The situation is particularly difficult for immigrants who are in the country illegally, said Lupe Rodríguez, executive director of the National Latina Institute for Reproductive Justice.

Many of them lack the documentation to take a commercial flight, and occasionally border agents search buses for immigrants who are in the country illegally, she said.

“They’re simply not able to go anywhere to get this care,” she said, adding that the ruling has also created widespread confusion, with pregnant women fearful they could face criminal prosecution. “There’s a lot of misinformation.”

In Missouri, where abortions were already severely restricted, a new ban took effect Friday that only allows the procedure in “cases of medical emergency.” Kansas City leaders are weighing a $300 stipend to help employees travel for an abortion. And across the state, in St. Louis, elected officials are considering another measure that would use $1 million in federal coronavirus relief funds to pay for transportation, lodging and other logistical support for abortion seekers.

“It’s kind of an American nightmare that we’re scrambling to find health care like this,” said St. Louis Alderwoman Annie Rice, adding that she anticipated the measure would pass by mid-July. If that happens, abortion opponents have vowed to ask the state’s attorney general to sue.

Just the Pill, a nonprofit health organization that helps patients obtain abortion pills, is hitting the road. It has purchased two vans — one medication van and another where surgical abortions will be done — with plans to begin operating those vans by mid- to-late-July in Colorado. The idea is to be close to the borders of states that have restricted or outlawed abortion.

Mississippi’s only abortion clinic, which is nicknamed the Pink House because of its bright pink paint job, is facing the prospect of closing if it loses its lawsuit that seeks to block a state law that makes most abortions illegal as of July 7.

“We’re not giving up,” said the clinic’s owner, Diane Derzis, who plans to open a new abortion clinic called the Pink House West early next month in Las Cruces, New Mexico. “Women have always had abortions, no matter what it took.”

Following the ruling, donations have been pouring in to abortion funds like South Dakota Access for Every Woman. Normally the group would get seven to 10 donations per month. Now they are getting 10 to 20 a day, said Evelyn Griesse, a co-founder of the group. The money goes straight to the abortion providers.

“If the woman says she’s using some of her own personal money to pay for the abortion, we say use that money to do your travel expenses,” Griesse said.

Some states are rolling out the welcome mat. Connecticut’s governor is out with a new campaign ad that touts the state’s laws protecting abortion rights for women. They include a soon-to-take-effect law that protects medical providers and patients from out-of-state legal actions.

“Women deserve the right to make their own decisions about their health care,” Gov. Ned Lamont, a Democrat running for reelection in November, said in the 30-second commercial released over the weekend.

In Pennsylvania, where state law still allows abortions in the first 24 weeks, clinics are bracing for an influx of out-of-state patients.

Susan Frietsche, a staff attorney for the Women’s Law Project, which represents abortion clinics in Pennsylvania, cautioned that state residents seeking abortions may have a harder time finding appointments, too.

“It affects everybody in the country,” Frietsche said. “Whereas yesterday, Pennsylvania providers were basically able to find appointment times for people who need to be seen, that is not going to be the case soon, and Pennsylvanians are going to have to travel to other states and not because the law here has changed, but you won’t be able to find an appointment soon, this is such a time-sensitive service.”