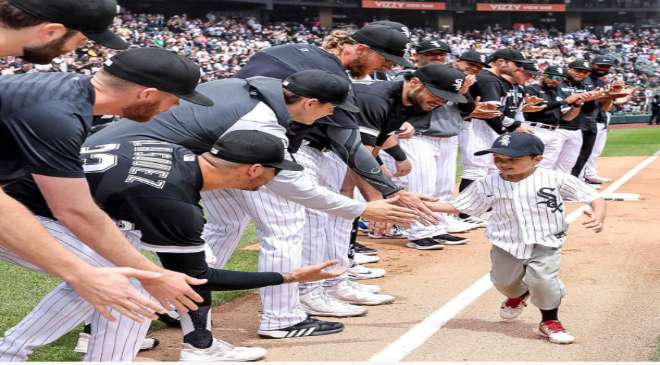 Ayoung boy just diagnosed with cancer for the second time, ecently fulfilled his wish of throwing out the first pitch at a Chicago White Sox game.

Beau Dowling was invited to spend time with White Sox players before the team took on the Baltimore Orioles on Saturday afternoon, according to WKRC.

During the visit, the 7-year-old — who was diagnosed with neuroblastoma as a toddler and is now fighting thyroid cancer — ran around the bases of Guaranteed Rate Field and high-fived players from both teams before reaching home base.

“Today we welcomed 7-year-old Beau Dowling for an ultimate day! Diagnosed with high-risk neuroblastoma as a toddler, Beau battled through stem cell transplants as well as several rounds of chemotherapy, radiation and immunotherapy,” the team said in a post on Twitter.

“He recently was diagnosed with thyroid cancer.”

The White Sox shared a video of the “Home Run for Life” visit on their social media pages.

Beau also threw out the ceremonial first pitch, and he and his family were given a $10,000 check from the Andrew Weishar Foundation, WKRC said.

But the White Sox weren’t the only ones cheering on Beau during his special moment.

Orioles’ first baseman Trey Mancini said he spoke to Beau after the ceremony to offer him some encouragement in his cancer battle.

RELATED VIDEO: Meet the ER Nurse Who Competed in This Year’s Iditarod Race in Honor of His Cancer Patient

“It was so cool, I came to the park today and I… knew we had a pregame ceremony but I didn’t know what it was,” Mancini told Nathan Ruiz of the Baltimore Sun. “I wanted to go over there after [Beau] ran the bases and tell him he was awesome.”

“I told him I had cancer two years ago, and I’m doing just fine now, and doing well,” he continued. I know the same thing is going to happen for him too. So I just wanted him to know that… It was absolutely incredible to be a part of.”