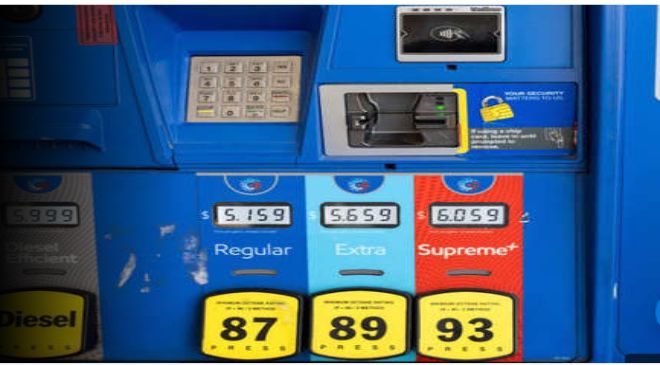 WASHINGTON — President Joe Biden will ask Congress on Wednesday to suspend the federal gas tax for the next three months in one of his administration’s most aggressive and controversial efforts to give Americans immediate relief as gas prices soar above $5 a gallon in many states.

The president also plans to call on states and local governments to temporarily suspend their gas taxes, according to senior administration officials who discussed the push on the condition of anonymity ahead of a 2 p.m. ET speech when Biden will formally make his case.

A three-month federal gas tax holiday would suspend a tax of 18.4 cents per gallon of gas and 24.4 cents for diesel that drivers pay when they fill their tanks. The administration is billing the gas tax holiday as a way to provide some “breathing room” as it works to bring costs down over the long term. The pause, which the White House envisions lasting through September, would require congressional approval.

Revenue from the federal gas tax funds the Highway Trust Fund, which is used to pay for transportation and mass transit projects. Biden wants Congress to offset the loss of highway funds – estimated to be about $10 billion – with other federal tax revenue. With the federal government’s deficit down $1.6 trillion this year, the U.S. can afford to pause the gas tax, an administration official said.

Biden’s push comes as he’s struggled to rein in historic gas prices amid skyrocketing inflation that has taken a toll on his presidency ahead of the November midterm elections. Suspending the gas tax is one of the quickest steps he can take to try to ease the pain for drivers. The national average for a gallon of gas was $4.968 on Wednesday, according to AAA, jumping more than $1.50 since Russia’s February invasion of Ukraine.

And yet a federal gas tax holiday, floated over the years but never enacted, has plenty of critics. Larry Summers, former Treasury secretary in the Clinton administration and an economic advisor for President Barack Obama, this week called it “a gimmick” that doesn’t solve the underlying issues causing the price spike.

Some economists warn it could drive up inflation once the holiday ends, deplete transportation funds and only reduce a fraction of the overall historic spike in gas prices. Environmentalists have argued a gas tax holiday undermines the goal of moving toward clean energy.

There’s also no guarantee Biden’s gas tax holiday proposal will pass Congress, where Democrats would need 60 votes in the evenly divided Senate to overcome any filibuster from Republicans.

A coalition of Senate Democrats from battleground states – including Raphael Warnock, D-Ga., Mark Kelly, D-Ariz., and Maggie Hassan, D-N.H. – in February proposed suspending the gas tax through the end of the year. But the legislation faced resistance from Republicans who slammed it as a political stunt to help Democrats in the midterms. The White House never rallied behind the legislation, which did not advance, but remained open to it publicly.

All 50 states, as well as the District of Columbia, impose a gasoline tax, with the revenue typically paying for transportation and other infrastructure projects. The average state gas tax is about 29 cents nationwide, with California paying the highest rate and Alaska the lowest.

The White House wants states, as well as cities that have gas fees, to replicate Connecticut, New York, Maryland and other states that temporarily suspended gas taxes this spring amid rising inflation.

One common concern raised by critics of a federal gas tax holiday is that oil companies will pocket the tax cut. But new research suggests that might not be the case.

The Wharton School of the University of Pennsylvania released budget estimates last week showing the majority of cost savings during gas tax holidays that Maryland, Connecticut and Georgia enacted this year went to consumers instead of gas companies or filling stations.

Biden will also use his speech Wednesday to renew his call for oil companies to increase refinery capacity and output and for retailers to pass savings on to consumers as the price of oil . The president has criticized oil company CEOs for collecting $35 billion in profits during the first quarter of 2022 as gas prices spiked. Energy Secretary Jennifer Granholm is set to meet with oil company executives later this week.

The Biden administration projects consumers could save $1 per gallon if retailers and oil companies take action and state gas taxes and the federal gas tax are suspended.

In other efforts aimed at reducing gas prices, Biden ordered the release of up to 180 million barrels of oil from the Strategic Petroleum Reserve and lifted restrictions on biofuels such as E15 gasoline.