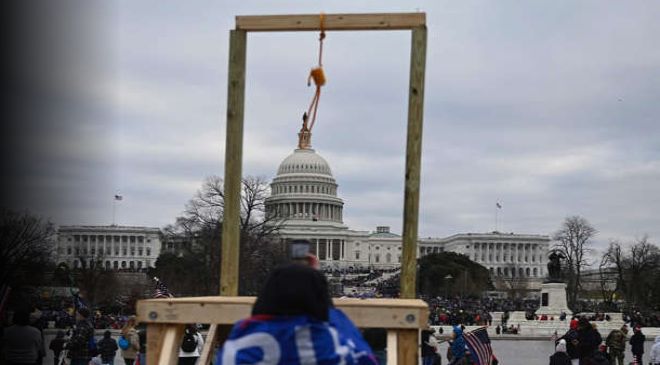 WASHINGTON — Hours after President Donald J. Trump announced a “wild” rally in Washington on Jan. 6, 2021, his supporters began discussing building a gallows in front of the Capitol.

“Could be built very quickly with the right plan and the right people bringing pre-cut materials to the site!” a user wrote on a pro-Trump online forum. “Anybody got a blueprint for a standing gallows like that? Who’s with me?!”

Days later, a second user posted a diagram describing the cuts of lumber and rope that would be needed to erect a gallows and fashion a noose. A lengthy planning discussion ensued. A third posted a manual on how to tie a hangman’s knot.

“We will be building a gallows right in front of the Capitol, so the traitors know the stakes,” another user wrote.

A striking array of far-right iconography littered the Capitol during the riot by Mr. Trump’s supporters, such as a Confederate flag, Crusader crosses, an Auschwitz-themed hoodie and “white power” hand gestures. But the gallows erected in front of the Capitol, where rioters chanted “Hang Mike Pence” as they stormed the building looking for the vice president, is one of the most chilling images to emerge from of a day of violence and extremism.

It is also one of the bigger unsolved mysteries in the investigation into what happened that day. Seventeen months after the riot, little is known about it. No one has publicly claimed responsibility for erecting the gallows or been charged with setting it up. It appeared to be too small to be used, though its presence — along with the orange noose that hung from it against the backdrop of the Capitol dome — clearly conveyed a threat of physical violence.

The House select committee investigating the Capitol assault showed video of the gallows when it opened its hearing on Thursday, as it detailed the intense pressure campaign that Mr. Trump waged against Mr. Pence, the threats of violence against him, how his security team tried to keep him safe from the mob, and how Mr. Trump reacted approvingly to his supporters’ threats to execute the vice president.

Yet Mr. Pence was hardly the first public figure to face such threats. The gallows has a prominent place in the language and belief system of the far right, and has been embraced in particular by white supremacists.

The imagery, said experts who study domestic extremism, evokes the early practice of hanging traitors; the nation’s dark history of lynchings and violent attempts to terrorize Black Americans; and a novel favored by white supremacists that culminates in the mass hangings of political enemies.

Above all, they said, it is intended to instill fear.

“The noose represents a message that requires nothing to be said,” said Charles L. Chavis Jr., an assistant professor at George Mason University who studies racial violence.

On Jan. 6, 2021, Mr. Chavis said he had been finishing revisions on his book on the 1931 lynching of a Black man in Maryland when he turned on the television and saw “the mob spirit that I had been studying for more than five years.”

“It was the same type of terror that Black communities have been witnessing directly and systemically for years,” Mr. Chavis said in an interview. “We had individuals who believed their rights were being violated, that justice was too slow. So they had to take matters into their hands, and replace the institutions that are supposed to bring about justice. At its essence, that is what racial terror represents: It is a frenzy that emerges outside the law.”

A review by The New York Times of more than 75 threats against members of Congress showed that several people specifically invoked nooses before Jan. 6.

“You better get behind Donald Trump, or we’re going to hang you,” one caller told several senators in a series of voice mail messages.

Far-right figures have continued to embrace that message. The Arizona State Senate censured one of its legislators, Wendy Rogers, in part for calling at a white nationalist rally this year to “build more gallows” to “make an example” of her political enemies.

Pete Simi, an associate professor at Chapman University who has studied extremist groups and violence for more than 20 years, said that the gallows erected in front of the Capitol could have been a reference for extremists steeped in racist writings to the 1978 novel of a violent revolution in the United States that leads to the extermination of nonwhite people in a day of mass hangings.

In far-right circles, Mr. Simi said, “mass violence directed toward your enemies is called for routinely. This is not something confined to the outer fringes.”

Whether the gallows erected on Jan. 6 was specifically in homage to the novel was unclear, he said. But it “signified the kind of violence that the novel depicts.”

Mr. Trump, who often uses violent language, is said to have embraced the imagery that day. During the Jan. 6 committee’s first hearing last week, Representative Liz Cheney, Republican of Wyoming and the vice chairwoman, cited witness testimony that quoted Mr. Trump identifying with members of the crowd as they chanted, “Hang Mike Pence!”

“Maybe our supporters have the right idea,” Mr. Trump was quoted as saying. Mr. Pence, he added, “deserves it.”

In choosing a symbol as public and visceral as a noose, towering above the Capitol, Mr. Trump’s supporters meant to send a message to a larger audience of Republicans, said Kurt Braddock, a professor at American University who studies extremism.

“It also serves the purpose of trying to disincentivize other people from doing what Mike Pence did: going against the lie that the election was stolen,” Mr. Braddock said. “It very much is meant to communicate to others that this is the fate that awaits people we see as traitors.”