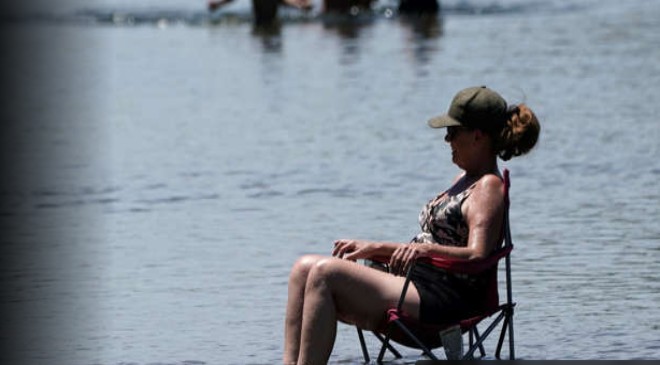 Heat advisories and excessive heat warnings were in effect for more than 75 million people in the southern and central United States on Sunday, a continuation of a scorching heat wave that resulted in record high temperatures on Saturday in 16 cities from the Southwest to the Southern Plains, according to the National Weather Service.

On Saturday, the temperature reached 114 degrees at Sky Harbor Airport in Phoenix, tying a record set more than a century ago.

Temperatures rose to 100 degrees and above in Las Vegas and even in Denver, where it snowed less than a month ago. In Death Valley in California, one of the hottest places in the world, temperatures soared to a daily record of 123 degrees on Saturday.

In southern Nevada, cooling stations were opened during daytime hours through Sunday. Officials in Fort Bend County in Texas advertised the area’s libraries as respites from the heat wave.

Robert Oravec, a meteorologist at the National Weather Service, said an area of high pressure at mid to upper levels of the atmosphere was driving up the temperatures.

“It’s a typical type of setup when you have a heat wave,” Mr. Oravec said. “When these type of patterns develop, you tend to have subsiding air, and the subsiding air warms the atmosphere. And you can get really warm temperatures.”

Dangerous heat conditions will continue on Sunday, with temperatures that could again reach into triple digits, according to the Weather Service. More records could be set on Sunday, Mr. Oravec said.

A heat wave is defined as two or more days of abnormally and uncomfortably hot and unusually humid weather.

The heat-related alerts in place on Sunday in the southern and central United States were “pretty impressive” in their breadth but not unheard-of around this time of year, Mr. Oravec said.

“The big question is always, how persistent is this going to be?” he added.

The Weather Service in Phoenix cautioned people to heed the warnings and take the heat seriously.

“Remember, heat is the #1 weather-related killer in the U.S. and AZ, so take the proper actions to protect yourself from the heat,” the service wrote on Twitter.

Each year, more than 600 people die from excessive heat, according to the Centers for Disease Control and Prevention. Older adults, athletes, infants and outdoor workers are particularly vulnerable.

The Weather Service recommended taking precautions against the intense heat, such as hydrating, applying sunscreen, avoiding strenuous activity, checking in on loved ones and monitoring pets.

A cold front is on the horizon for Monday in the Southwest, which will most likely provide some relief for the region, but the heat will then move to the eastern portion of the country, from parts of the Mississippi Valley to the Carolinas, and north to the Central Plains.

By the middle of the week, the heat will push into the Ohio Valley and Great Lakes, Mr. Oravec said, adding that it is possible the number of Americans under heat advisories and warnings could rise to beyond the estimated 75 million people affected on Sunday.

On Sunday, rain was expected in the Pacific Northwest, Northern California and the Rockies, and flood watches were in effect in Idaho, Montana, Oregon and Washington, the Weather Service said.

High temperatures, coupled with low humidity and strong winds, were continuing to produce critical fire weather conditions, according to the National Weather Service. Red flag warnings, indicating an increased risk of fire, were issued for parts of Arizona, Colorado, New Mexico and Utah.