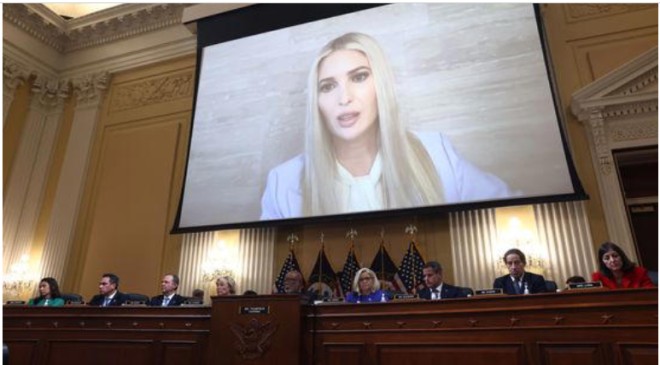 WASHINGTON—The Jan. 6 committee’s much-anticipated prime-time hearing unfolded Thursday night with a mix of opening statements by lawmakers, snippets of testimony from key players, video of the attack itself and live appearances by two witnesses.

Here are some key takeaways from the first of six planned sessions over the next two weeks.

The committee published previously unseen footage of the attack. Viewers also heard testimony from Trump allies including Ivanka Trump, the president’s daughter, who said hearing that former President Donald Trump’s then-attorney general, William Barr, didn’t think there was evidence of widespread voter fraud “affected my perspective. I respect Attorney General Barr, so I accepted what he was saying.”

The committee’s presentation mostly sought to connect previously known information about Mr. Trump’s actions before and during the riot rather than to deliver bombshell revelations.

The committee’s coming hearings could contain more revelations, but a lot of information has already been disclosed about the Jan. 6 attack.

Many moments during the riot were recorded in social-media posts, in surveillance footage, or by journalists. The Justice Department has disclosed piles of evidence as part of court proceedings against hundreds of defendants. The Jan. 6 panel’s probe already had received widespread coverage, with plenty of leaks as the investigation progressed. Some lawmakers have expressed worry that the impact of the hearings might be lessened because of the leaks.

In case there was any doubt, Thursday’s hearing made it clear that Mr. Trump is the focal point of the committee’s investigation. “Donald Trump was at the center of that conspiracy,” said Rep. Bennie Thompson (D., Miss.), the panel’s chairman. “And ultimately, Donald Trump—the president of the United States—spurred a mob of domestic enemies of the Constitution to march down the Capitol and subvert American democracy.”

Ms. Cheney also put the blame on Mr. Trump. “Those who invaded our Capitol and battled law enforcement for hours were motivated by what President Trump had told them: that the election was stolen, and that he was the rightful president.” She also recounted how Mr. Trump “refused for hours to do what his staff, his family, and many of his other advisers begged him to do: immediately instruct his supporters to stand down and evacuate the Capitol.”

Mr. Trump has denied any responsibility or wrongdoing related to the attack. In a series of posts to his Truth Social service Thursday, Mr. Trump called the Jan. 6 panel an “Unselect Committee of political Thugs.”

While a congressional hearing usually includes chances for both sides to speak, the select committee is unusual because it doesn’t count any Trump allies among its members. So unlike during the two sets of House impeachment hearings against Mr. Trump, there was no one in the hearing room Thursday night offering an opposing view.

The select committee is composed of seven Democrats and two Republicans, all named to the panel by Mrs. Pelosi. The two Republicans, Rep. Adam Kinzinger (Ill.) and Ms. Cheney, have been critical of Mr. Trump and earned his enmity in response.

Democrats say the select committee’s probe is focused on the facts and isn’t about partisanship. Republicans have criticized the panel as a political witch hunt and say it is a distraction from issues such as high gasoline prices and crime.

House Republican leaders held a separate press conference earlier Thursday before the hearing, effectively a prebuttal. “It is a smokescreen for Democrats to push their radical agenda,” Mr. McCarthy said about the select committee Thursday.

The hearing made clear that the committee sees the far-right group the Proud Boys as central instigators of the riot.

Nick Quested, a British documentarian who was filming members of the Proud Boys in the days leading up to Jan. 6 and on the day itself, estimated that a couple hundred Proud Boys affiliates marched toward the Capitol that day.

Dozens of Jan. 6 defendants were affiliated with the far-right groups the Proud Boys or the Oath Keepers, according to prosecutors. However, most of the people who have been charged with crimes related to Jan. 6 weren’t affiliated with any extremist group, officials have said. Such diffuse activity and potential threats present a challenge to law enforcement trying to prevent any future attacks.

Enrique Tarrio, a former leader of the Proud Boys, has defended the group’s actions, previously telling the Journal that the group doesn’t condone violence unless in self-defense. A lawyer for the Oath Keepers previously told the Journal there was no plan to invade the Capitol. Mr. Tarrio wasn’t in Washington that day, but prosecutors have said he engaged in planning before Jan. 6 and later claimed credit on social media.

“What I saw was just a war scene,” said Ms. Edwards, who said she was knocked unconscious early during the riot but then regained consciousness and tried again to protect the building. She added, “There were officers on the ground. They were bleeding. They were throwing up.”

The committee played dramatic footage of Capitol Police officers asking for help and fighting hand-to-hand with the rioters.

The attack had lasting effects on police officers, lawmakers and Hill staffers who were there, including trauma from having their place of work attacked. Roughly 140 law-enforcement officers were injured during the attack, according to a bipartisan Senate report released last year. Some officers have said they suffered physical and mental trauma for months after the riot.

One Capitol Police officer was assaulted during the attack and suffered a stroke. He died the day after the riot of natural causes, according to the medical examiner’s office in Washington, D.C. At least four other officers—three from the Metropolitan Police Department and one from the Capitol Police—died by suicide days or months after responding to the riot.

Along with a host of websites that streamed the hearing, most major broadcast networks and cable news channels covered the hearing in its entirety, with the exception of Fox News Channel. Fox News said its prime-time programs will cover the hearings “as news warrants.”

By the end of the session Thursday night, “Jan. 6 hearing” was the third-most-searched topic on Google in the U.S., just ahead of Britney Spears’s wedding and behind the new movie “Jurassic World: Dominion.”

One question going forward will be whether the hearings will end up changing any minds or affecting how people vote in this year’s midterm elections. A May NBC News poll found that 45% of Americans thought Mr. Trump was solely or mainly responsible for the Jan. 6 riot, compared with 52% who thought that in January 2021. The recent poll found 55% said Mr. Trump was somewhat responsible or not really responsible.

Many Republican candidates are taking a page from the former president and using election-fraud claims to rally Trump supporters, while some Democrats have invoked Jan. 6 to urge voters to reject the GOP. This year’s midterm elections will test whether such claims win support from voters, or repel them.

Corrections & Amplifications William Barr was attorney general during the Trump administration in 2019 and 2020. An earlier version of this article incorrectly referred to him as former President Donald Trump’s longtime attorney general. (Corrected on June 10)