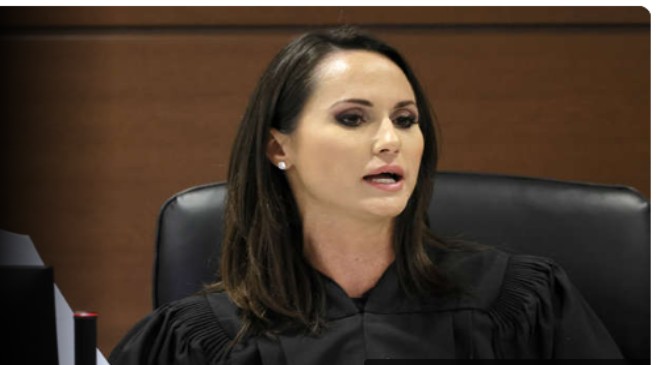 The ongoing trial for Parkland school shooter Nikolas Cruz faced a complicated situation in court on Monday, that culminated with the defense team motioning to have the judge disqualified from the case.

On Monday, lead defense attorney Melisa McNeill motioned to have Broward County Judge Elizabeth Scherer withdraw herself from the case amid a dispute over how the ongoing jury selection process was proceeding, court documents show.

Despite Cruz pleading guilty to all 17 counts of premeditated murder and 17 counts of attempted murder in the shooting of his classmates and teachers at Marjory Stoneman Douglas High School in 2018, the trial has yet to complete its jury selection process.

The contention in the Fort Lauderdale, Florida courtroom started as a member of the defense team, attorney Casey Secor, was out of the courtroom with an unspecified illness. His team said he was “in quarantine,” WPLG reported.

The judge wanted the court to proceed with asking potential jurors their views on the death penalty, which could potentially disqualify them from jurying the case, but the defense team did not wish to proceed in the process without Secor in the courtroom.

Secor was specifically hired to assist in the jury selection process and he is the only other defense team member who has experience in death penalty trial cases, according to the report.

Instead of proceeding, the defense team then asked Scherer if the court could spend Monday asking jurors about general hardships.

McNeill told the judge she faced a decision of disobeying the court or moving forward without her full team and motioned to withdraw the defense team from the case entirely.

“Judge, at this time the defense would move to withdraw from the case of the state of Florida vs. Nikolas Cruz,” McNeill said, WPLG reported. “Right now, if I do not comply with the court’s order and do not protect Mr. Cruz’s constitutional rights to due process, I now have to consider whether or not my liberty is going to be at jeopardy or Mr. Cruz’s liberty is going to be at jeopardy.”

The defense attorney also claimed not providing her client with the best possible services could impact her own career.

“I’m also going to have to consider whether or not my law license can be impacted, which would impact my ability to raise my children, feed my children and educate my children,” McNeill reportedly added.

According to the report, Judge Scherer “respectfully” denied the motion and recessed the court.

Upon returning, Prosecutor Carolyn McCann asked the judge if they could question potential jurors about hardships — and not their death penalty views — as there were only a few hours left in the day. Scherer agreed, despite pressing earlier in the day to move the court along.

McNeill then entered the courtroom with a “motion for disqualification” against Judge Scherer, asking her to withdraw herself from the case, court documents show.

The judge refused this motion as well.

According to the report, the defense team was also worried recent shooting incidents, including the school shooting in Uvalde, Texas could affect a jury’s opinion on the case, and they wanted the additional day to question jurors’ impartiality.

“To continue this trial for a reasonable period of time to allow the wave of emotion surrounding the recent mass shootings to subside so that Mr. Cruz can be tried by a jury free from bias and prejudice against him for events that are not relevant to his crime, his background, his character or his life,” the motion read, per WPLG.

The Robb Elementary School shooting “has opened old wounds for the Broward County community and has heightened anxiety for Broward students and parents,” the defense added.

Judge Scherer is reportedly hoping to have 150 potential jurors for the next phase of questioning, though only 35 have advanced. About 95 have been rejected.