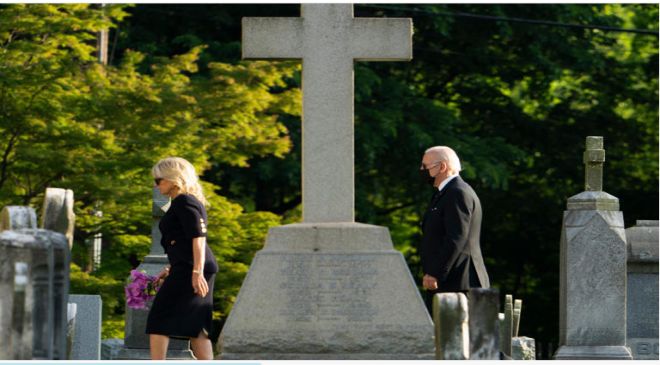 President Joe Biden and his family visited the gravesite of his late son, Beau Biden, on the anniversary of his death, which fell on Memorial Day this year.

Beau, an Iraq War veteran, died of brain cancer on May 30, 2015, at age 46, while his father was serving as vice president during the Obama administration.

On Monday morning, the Bidens attended a service at St. Joseph on the Brandywine in Wilmington, Delaware. First Lady Jill Biden carried in a bouquet of pink flowers.

Following the service, the president and first lady walked to Beau’s gravesite at the church cemetery. They were accompanied by Biden’s grandchildren and his sister, Valeria Biden Owens.

President Biden is due to deliver a speech from Arlington National Cemetary in observance of Memorial Day later on Monday.

Beau served two terms as Delaware’s attorney general and did a one-year tour in Iraq where he served as a captain in the Delaware Army National Guard.

He said that he would run for governor of Delaware in 2016, despite looming questions about his health. He had been hospitalized on several occasions, including a mild stroke in 2010 and an operation in 2013 to remove a lesion from his brain. He was diagnosed with brain cancer two years before his death, according to the Associated Press.

President Biden has frequently spoken about losing a child, most recently in his remarks following the Uvalde school shooting in Texas.

“To lose a child is like having a piece of your soul ripped away.  There’s a hollowness in your chest, and you feel like you’re being sucked into it and never going to be able to get out.  It’s suffocating.  And it’s never quite the same,” Biden said.

Prior to the death of his son in 2015, Biden’s first wife and infant daughter were killed in a car crash in 1972.