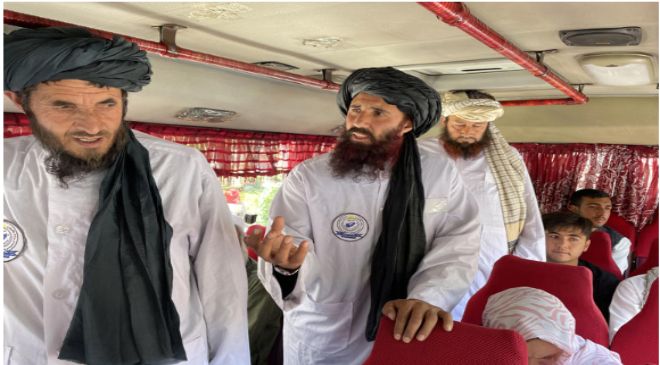 KABUL — As Abdullah Obeid and his team boarded a bus in central Kabul, female passengers lowered their gaze and hurriedly adjusted headscarves to cover their faces. Obeid, a member of the Taliban’s morality police, was leading a patrol to enforce a recent ruling requiring Afghan women to fully cover in public.

“These people are fine,” he told the driver as he stepped down onto the street. “But if any other woman is not wearing the proper hijab, don’t allow her on!” he barked, waving the bus away.

Under orders from the Ministry for the Prevention of Vice and Promotion of Virtue, Obeid has increased patrols since the decree earlier this month forcing all Afghan women to cover from head to toe, including their faces. But he described his mandate as much wider than dress code enforcement.

“The people of Kabul are full of all kinds of corruption after the last 20 years, so now it is up to us to cleanse everyone,” he said.

More than nine months into Taliban rule, the Ministry of Vice and Virtue is expanding its reach into all aspects of Afghan society. Women have been the targets of the ministry’s new laws, but on patrol, its employees enforce gender segregation, address allegations of bribery and demand that men pray regularly.

“At the beginning, we had hope the Taliban would be softer, but now the only safe place for me is my home,” said Negina Lali, 22, a university student who was recently barred from attending class because she wasn’t dressed entirely in black.

Lali has put her colorful scarves away, but even when she follows the Taliban’s new dress code, her parents worry about her going out.

“My mother remembers the previous Taliban government, so she is very afraid for me. More and more, she tells me stories from that time,” she said.

When the Taliban controlled Afghanistan in the 1990s, the Ministry of Vice and Virtue was one of its most feared institutions.

As a young woman, Lali’s mother said she was beaten in the street by the ministry’s enforcers because she forgot to wear socks. Another time, she was whipped in front of her young children when the scarf covering her head and face was blown off by a gust of wind.

“All this is to erase women,” Lali said. “They don’t want to see us outside at all. I only expect the situation to get worse.”

Days after the ruling requiring women to cover in public, the Ministry of Vice and Virtue issued another edict mandating that women on television also cover their faces.

Television news outlets in Kabul protested, but during a meeting shortly after the announcement, a team from the ministry ended the debate before it could begin.

“The door is closed,” the team said, according to Khpolwak Sapai, the director of ToloNews, Afghanistan’s largest independent news network, who was at the meeting. Sapai has been in regular contact with the Ministry of Vice and Virtue for months over what he is allowed to broadcast.

“At the beginning, it was like we were having normal conversations,” Sapai said, referring to the first time he was called in to discuss a ban on female actors in television dramas. “But with each order, they have become more and more strict. We used to see a path forward, but after this last decision, I can’t imagine it anymore.”

Khatera Ahmadi, a news presenter at ToloNews, said she had no choice but to comply with the ruling. On air now, she wears a black scarf covering her head and face below the eyes.

“I don’t really care about having to cover my face, our voice is what matters most,” the 26-year-old said. “My goal is to raise the voices of millions of Afghan women. But what I am worried about is that next they will ban us from coming to work completely.”

Mohammad Sadiq Akif, the spokesman for the Ministry of Vice and Virtue, insists that the restrictions on the rights and public lives of women are for the common good.

“Enforcing hijab is an important part of cleansing a society. When women wear the proper hijab, it prevents bad behavior in others,” he said, claiming that the way Afghan women dressed in cities such as Kabul before the Taliban takeover encouraged sexual harassment from men.

“This is not a violation of women’s rights, it gives women more freedom,” he said.

Since the ruling on head-to-toe coverings, Akif estimates that two dozen families have been summoned to the ministry after their female relatives violated the dress code. In all cases, he said, male relatives agreed to enforce the ruling.

Akif dismissed the international outrage over the Taliban’s treatment of women.

“No other country should intervene in our domestic affairs,” he said. “The world must respect Afghanistan’s decision.”

During another vice and virtue patrol, a team stopped at a bazaar. They moved from store to store and asked shopkeepers whether they break to pray and if they have witnessed corruption, and they warned them against serving women who are not fully covered.

“Why are you asking about these things?” asked a man stepping out from the crowd. “The government should be focusing on other issues like fixing the economy and providing jobs,” he said, identifying himself as Abdul Ahad, a 24-year-old doctor.

The team told him to raise his concerns with the Ministry of Labor or other relevant branches of government.

“But you are the only people from the government who I see, no one else comes here,” he said as the team walked away.

An owner of an amusement park in Kabul made a similar observation about the widening reach of the vice and virtue teams.

“They are everywhere. In every part of our lives and every part of the country,” he said, speaking on the condition of anonymity for fear of reprisal. Teams visit his park regularly, and he blames them for plummeting attendance, saying gender segregation makes it almost impossible for a family to visit together.

“Just watching the news, we hear more about the Ministry for the Prevention of Vice and Promotion of Virtue than any other ministry. It seems they are responsible for everything important,” he said.

Lali, the university student, has felt her life shrink with each new restriction.

“It’s not just about clothing, they are taking away our freedom to make our own choices,” she said. “It is like they don’t accept women as human beings.”

But the ministry has argued repeatedly that it is simply implementing Islamic law.

“The criticism in the media is just propaganda,” said Obeid, as his team finished its day with a stop for ice cream. He’s been on hundreds of patrols in Kabul, he said, and “no woman ever told me we are taking away their rights.”

When pressed, he snapped.

“We are carrying out the order of God. It doesn’t matter what women say they want.”