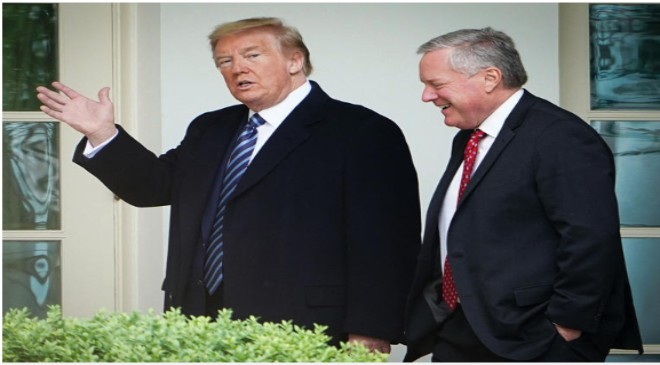 Two witnesses have told the House committee investigating the Capitol attack that Trump’s chief of staff, Mark Meadows, described Trump complaining that Pence was being taken to safety when the mob stormed the building, according to the New York Times.

Meadows left Trump in a dining room off the Oval Office and told colleagues in his own office that Trump “said something to the effect of, maybe Mr. Pence should be hung,” according to witnesses cited in the report.

But Trump’s tone was unclear and his precise remarks weren’t quoted in the story.

The report echoed what Jonathan Karl, an ABC News reporter, said in November with the release of a book about Trump called “Betrayal.” When asked about the chants, Trump told Karl in a recorded interview Pence was “in very good shape” and “well protected,” but “the people were very angry.”

The committee also gathered testimony that Meadows used the fireplace in his office to burn documents, according to the newspaper.

A spokesman for the committee and Meadows’ lawyer didn’t immediately respond to a request for comment.

“This partisan committee’s vague ‘leaks,’ anonymous testimony, and willingness to alter evidence proves it’s just an extension of the Democrat smear campaign that has been exposed time and time again for being fabricated and dishonest,” Budowich said. “Americans are tired of the Democrat lies and the charades, but, sadly, it’s the only thing they have to offer.”

The report came as the committee prepares to hold eight hearings on its investigation, beginning June 9. The panel is trying to map minute-by-minute what happened that day at Congress and at the White House.

The report came as the committee prepares to hold eight hearings on its investigation, beginning June 9. The panel is trying to map minute-by-minute what happened that day at Congress and at the White House.

Pence presided over the vote count as president of the Senate. He was also a key figure in Trump’s plan to overturn the 2020 election by rejecting electoral votes from seven contested states. But Pence refused.

Rioters erected a gallows outside the Capitol. Members of the mob chanted “Hang Mike Pence!” while ransacking the building and injuring 140 police officers.

Secret Service agents moved Pence to an underground garage while the count was temporarily interrupted. But Pence was uninjured and later resumed overseeing the count that confirmed President Joe Biden’s victory.

Meadows initially cooperated with the committee by providing texts and other records. But then he defied a committee subpoena and filed a lawsuit pending in federal court to prevent the committee from getting his phone records.

The House voted to hold him in contempt. The Justice Department hasn’t announced a decision on whether to charge him criminally with contempt.

Thousands of texts Meadows provided the committee revealed concern about the attack among Republican lawmakers and a discussion of martial law.