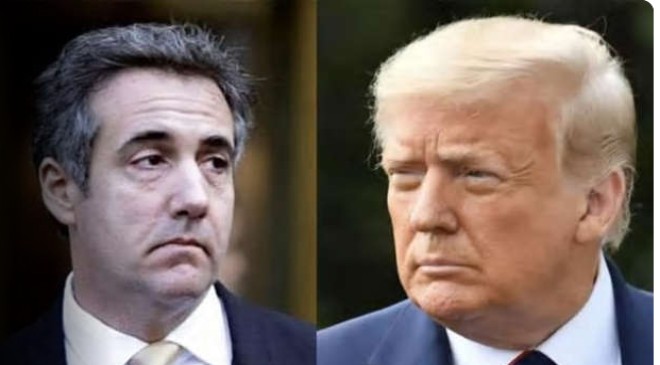 According to a Daily Beast review of court transcripts in a lawsuit a protester has brought against Donald Trump, his former attorney Michael Cohen explained in detail a conversation he overheard between the former president and his head of security that contradicts what Trump previously testified under oath.

That, in turn, could lead to Trump facing charges of perjury.

As the Beast’s Jose Pagliery reports, Cohen was a last-minute witness in a lawsuit brought against Trump where he is accused of siccing his security team on protesters outside of Trump Tower before he became president. In a previous deposition, Trump has denied involvement.

However, as the new report states, Cohen gave testimony that he was in the room when the protesters were discussed and, under questioning, stated Trump asked security head Keith Schiller, “Did you see that there’s a demonstration going on? Get rid of them,” to which Schiller reportedly replied, ”Okay, boss.”

The Beast’s Pagliery writes, “When Schiller reappeared in his boss’s office less than half an hour later, he had a large piece of a cardboard sign he had ripped out of the hand of Queens resident and demonstrator Efrain Galicia. Video captured by journalists downstairs caught the scrappy fight. Cohen remembered Schiller saying, ‘I took the sign. He grabbed me, so I hit him across the side of the head,’ to which Trump responded, ‘Good.'”

As the report notes, Trump previously denied ordering an attack on the protesters when he was asked if he instructed Schiller to use force, to which he replied, “No I didn’t.”

The report continues, “Although Trump previously swore that he did not order his guards to do anything, Cohen testified to the complete opposite—opening up the possibility that his former boss lied under oath,” before adding, “If the case goes to trial in the coming weeks, jurors will likely hear all three stories and have to make up their minds about whom to believe.”

As a side note, the Beast report also reveals Cohen also testified Trump lived in fear of being “pied” after it happened to Microsoft founder Bill Gates with Pagliery quoting the attorney testifying, “For some reason that upset Mr. Trump terribly. We were all instructed that if somebody was to ever throw anything at him, that if that person didn’t end up in the hospital, we’d all be fired,”