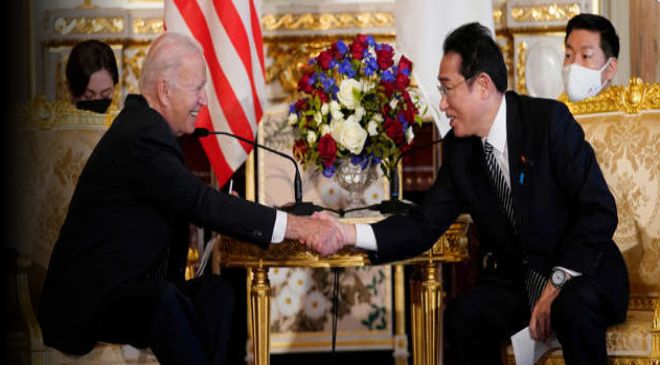 Unwilling to pursue trade agreements that are unpopular in the United States, President Joe Biden on Monday rolled out a different type of economic agreement among Indo-Pacific countries.

Biden announced in Tokyo the dozen founding partners for his Indo-Pacific Economic Framework, an effort to deepen cooperation and U.S. economic engagement in the region, partly to help counter China’s growing economic and military influence.

The participating countries, however, must still negotiate the details in each action area – including supply chains, digital trade, clean energy and anticorruption – before signing any agreements. Congress  may have to sign off on the agreements as  it does trade pacts.

The Obama administration had hoped to assert U.S. leadership in the region through the Trans-Pacific Partnership, a comprehensive trade agreement among 12 Pacific Rim countries. But the deal struggled to win support from lawmakers, and former President Donald Trump withdrew from it, declaring an end to the era of multinational trade agreements.

Biden administration officials have acknowledged that trade deals are a tough sell back home and are casting their approach to a pact as more flexible than the one pursued by Obama.

“For decades, trade policy was often reduced to a zero-sum game that left many of our workers behind,” said Katherine Tai, the United States trade representative.

But without offering lower tariffs or access to the huge American market, the IPEF is mostly attractive to other countries as a way to keep the U.S. active in the region until the politics of traditional trade agreements change, according to experts.

“They wish that the U.S. would come back to TPP and they know that that is impossible now,” said Scott Kennedy, a China expert at the Center for Strategic and International Affairs.

“We are truly hoping for (the) return of the United States,” Kishida said through an interpreter at a joint news conference with Biden before joining Biden for IPEF’s launch.

The U.S. Chamber of Commerce welcomed the new alliance. But Myron Brilliant, the group’s head of international affairs, called it “disappointing that the IPEF does not currently provide new access to foreign markets for American workers, farmers and companies.”

“It’s hard to see how it can be enforceable without such a provision,” Brilliant said in a statement.

Tai said on a call with reporters that the administration learned a lesson from the previous effort to get TPP passed.

“TPP, as it was envisioned, ultimately was something that was quite fragile and that the United States was not able to deliver on. And that informs very much our thinking about bringing the Indo-Pacific Economic Framework, as it’s designed here, to the region – which is that trade is an important component of this, but not the only component,” Tai said.

The other countries participating in the pact are Australia, Brunei, India, Indonesia, South Korea, Malaysia, New Zealand, the Philippines, Singapore, Thailand, and Vietnam.

Along with the United States, the participants represent 40% of world GDP.

Matt Goodman, a global economic expert at the Center for Strategic and International Studies who worked in the Obama administration, called it “absolutely critical” that the U.S. have a credible economic strategy in the Indo-Pacific.

“We’re a Pacific power but not an Asian country,” Goodman said. “To be considered a real partner and player in the region, we have to engage on all levels. And it’s not just about our military or our diplomatic capabilities.”

China has criticized the pact as an “exclusive clique” that will create “turmoil and chaos in the region.”

Jake Sullivan, Biden’s national security adviser, said the Indo-Pacific Economic Framework is not about forcing countries to choose between the United States and China.

“But it is about offering a value proposition that we think countries are taking extremely seriously,” he said, also noting that the U.S. economy is poised to grow faster than China’s this year for the first time since 1976.

The Biden administration did not provoke China further by including in the pact Taiwan, the self-ruled Island that China claims as its own.

Instead, the U.S. is working directly with Taiwan on high-technology issues, including semiconductors and supply chains, and other matters.

Biden also hasn’t decided whether to lift the trade tariffs the Trump administration imposed on China.

“I am considering it,” Biden said Monday.

“I just think if you are the president and have made inflation, rightfully, your number one priority you want to leave no stone unturned,” Furman said on CBS’ “Face the Nation” Sunday, “and this is one of the bigger tools he has.”