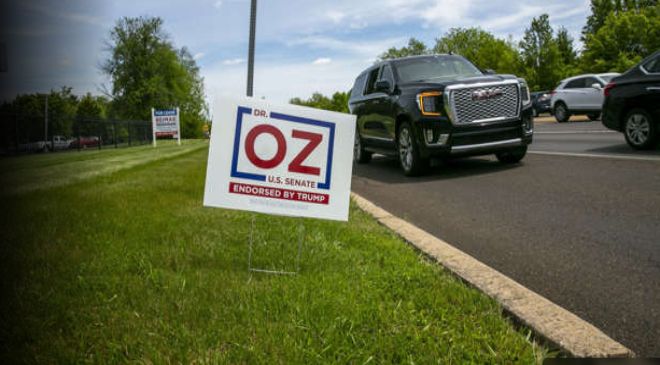 Pennsylvania, a state Trump won in 2016 but lost four years later, was at the center of his baseless claims that fraud cost him the 2020 election, and he suggested Wednesday that something nefarious could happen in Oz’s race. Trump falsely claimed victory in Pennsylvania in 2020 and sought to stop mail-in ballots from being counted.

On Wednesday, the former president sought to declare on his social media site, Truth Social, that Oz had won, even though the race has not been called. He derided the mail-in ballots, posting: “Here we go again! In Pennsylvania they are unable to count the Mail-in Ballots. It is a BIG MESS. Our Country should go to paper ballots, with same day voting. Just done in France, zero problems. Get Smart America!”

‘”It makes it much harder for them to cheat with the ballots that they ‘just happened to find,’” Trump said, providing no evidence.

Pennsylvania law mandates an automatic recount if a candidate’s margin of victory is 0.5 points or less. Thousands of mail-in ballots remain to be counted.

The winner will take on Lieutenant Governor John Fetterman, who overwhelmingly won the Democratic nomination. Fetterman is recovering from a recent stroke that kept him off the campaign trail in the primary’s final days. He hopes to get back out on the trail in a few days, his wife, Gisele Barreto Fetterman, said Wednesday morning on CNN.

The race is seen as a crucial front in the battle for the Senate majority. The Pennsylvania seat is held by a Republican, Senator Pat Toomey, who is retiring.

The contentious race between Oz and McCormick left an opening for a third candidate, Kathy Barnette, to gain traction in the final weeks of the campaign among voters who were underwhelmed by their top-tier choices. Barnette, who competed for Trump supporters with a far-right platform that embraced many of the former president’s ideas, including his false claims that the 2020 election was stolen, was on pace to finish a distant third.

“President Trump after he endorsed me continued to lean into this race in Pennsylvania. . . . God bless you, sir, for putting so much effort into this race. I will make you proud,” Oz said. “I want to thank Sean Hannity. . . . He understands exactly how to make a difference, and he’s been doing that the entire campaign, much of it behind the scenes.”

TOPEKA, Kan. — Republicans on Wednesday improved their chances of flipping the only Kansas congressional seat held by a Democrat, when the state’s highest court upheld the new congressional map they drew.

The map slices territory out of the Kansas City-area district Democratic US Representative Sharice Davids has carried by a 2-to-1 margin and replaces it with three counties that former president Donald Trump carried by more than 40 percentage points in 2020. Republicans argued that Davids still would have carried the new district two years ago and that the map was a fair way to rebalance the number of residents in each of the state’s four districts after 10 years of population shifts.

Attorneys for the Kansas voters and voting rights group that challenged the map urged the state Supreme Court to declare that broad language about “inalienable natural rights” and “equal protection and benefits” in the state’s bill of rights bars overly partisan and racial gerrymandering.

But the justices apparently didn’t see it that way.

Their decision bucks what has been a trend in a small but growing number of states since the conservative-leaning US Supreme Court ruled in a 5-4 decision in 2019 that complaints about partisan gerrymandering are political issues and not for the federal courts to resolve.

However, the Kansas court’s reasoning is not yet clear. Its opinion was two paragraphs long, saying only that the voters and voting rights group challenging the map “have not prevailed on their claims” that the map violated the state constitution and that a full opinion would come later.

The brief decision was written by Justice Caleb Stegall, who is seen as the most conservative of the court’s seven justices, five of whom were appointed by Democratic governors. During arguments from attorneys on Monday, he questioned whether anyone could clearly define improper partisan gerrymandering.

Lawsuits over new congressional district lines have proliferated across the US, with Republicans looking to recapture a US House majority in this year’s midterm elections. Congressional maps in at least 17 states have inspired lawsuits, according to the Brennan Center.

In Kansas, the Republican-controlled Legislature enacted the map over Democratic Governor Laura Kelly’s veto, and Davids said Wednesday that new district lines resulted from “rushed hearings” and “back-room deals.” Her likely GOP opponent, Amanda Adkins, said in a statement that the new map “is evidence that our democratic process works.”

Governor Brad Little of Idaho won his Republican primary on Tuesday, overcoming a challenge from a lieutenant governor who had secured an endorsement from former president Donald Trump and had spoken at a recent white nationalist conference.

Little, whose primary victory was called by the Associated Press early Wednesday, most likely secured himself a second term in a state that hasn’t elected a statewide Democrat in two decades.

Lieutenant Governor Janice McGeachin had challenged Little after feuding with him over his handling of the coronavirus pandemic and portraying him as insufficiently Republican, even as he slashed taxes, cut regulations, and approved one of the nation’s strictest abortion bans. She had spent the campaign networking with militia members, the John Birch Society, and the political committee led by white nationalist Nick Fuentes.

The state’s Republican Party has been locked in a feud between factions, with traditional GOP members sounding the alarm that far-right elements in the state were seizing control of the party apparatus. One group of conservatives recently formed an alliance called “Take Back Idaho” in hopes of keeping the state from straying toward those extremes.

Parts of Idaho have long been a home base for antigovernment militias or racists seeking a whites-only homeland. Many people seeking refuge from liberal policies elsewhere have also moved into the state, but so have more moderate voters arriving in fast-growing cities like Boise.

Little is set to face off against one of two Democrats in November — Stephen Heidt, a teacher who lives outside Boise, or Shelby Rognstad, the mayor of Sandpoint, a small city in northern Idaho. Another candidate poised to be on the ballot: Ammon Bundy, who led an armed takeover of an Oregon wildlife refuge in 2016. He is running as an independent.